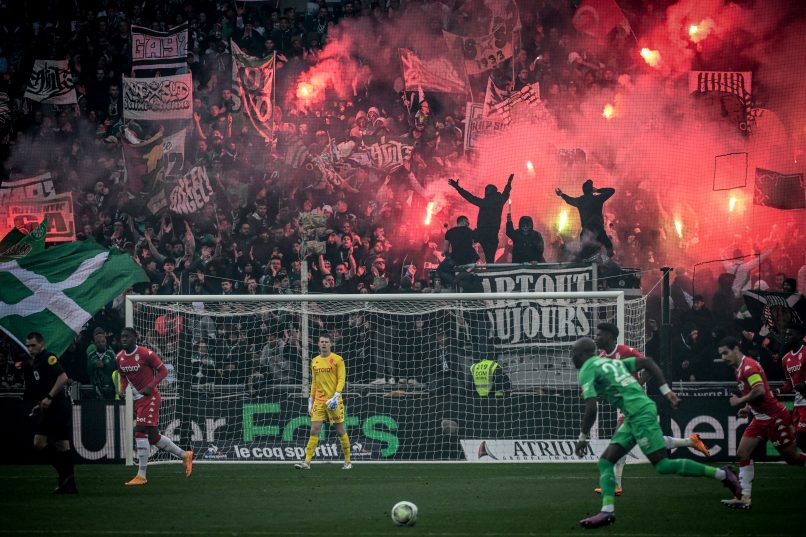 Ligue 1 domestic broadcaster Amazon Prime have released a video offering fans a rare behind-the-scenes insight into refereeing, as the official for Saint-Étienne’s match against Monaco, Bastien Dechepy, was mic’d up throughout the game.

The video follows Dechepy thoughout a tense fixture as we hear his reasoning for some of the key decisions, in particular when he temporarily suspended the game due to fireworks being thrown by the home fans.

On several early incidents, such as a foul from ASSE defender Gabriel Silva, we see Dechepy calmly assert his authority all the while clearly and respectfully explaining the situation to the offending player.

The official constantly liaises with VAR referee Mikaël Lesage, notably regarding fouls in real time or on goal celebrations.

DB “On the free kick over there, there was a handball.”

BD “I agree with you that there was a hand, but his arm is like this [by his side], it’s accidental and there’s no movement. His arm is by his side, it’s a completely natural [position].”

Late in the first half, Dechepy speaks to Saint-Étienne midfielder Lucas Gourna-Douath on a pair of fouls he commits – “Mr. Gourna, 70m away from your goal that can be a silly card to pick up. Be smart, I’m counting on you.”

For the penalty decision in the home side’s favour, the referee immediately points to the spot after Tchouaméni’s foul on Camara. He tells his VAR team, “for me, he didn’t just get the ball”, while waving away the protesting Monaco players (“I’m speaking to my colleagues”). The VAR referees inform him that they are looking for a clear angle, before confirming Dechepy’s decision.

Before Khazri’s penalty, he tells the Tunisian to not pause at the end of his run up, and waves away Alexander Nübel, telling the goalkeeper, in English, to get on his line.

After a heated exchange with Khazri after giving the midfielder a yellow card – “If you speak to me like that I can’t explain it to you” – he interrupts the game just before half-time due to the fireworks from Saint-Étienne fans. After a Ben Yedder foul, Wahbi Khazri again confronts him, this time asking why the striker was not given a yelllow card as he was. The referee takes him to one side and sternly tells him to “stop running after me”, and that “I want to keep you on the pitch until the end of the game, can I count on you?”.

On 67 minutes, the match is again interrupted by the home fans’ flares and fireworks, after which the referee sends the players back into the changing room, explaining to the players that the supporters had already been given a warning – “If something like that hits you on the head, it can be dangerous”.

Dechepy then announces to the press, after a meeting with league officials and local authorities, that the decision is to resume the game. After Myron Boadu scored Monaco’s 4th after the restart, he tells his team to keep an eye on the crowd’s reaction, with the Saint-Étienne fans particularly irritated with their team at that point.

The video is the latest in Amazon’s push to have all Ligue 1 referees equipped with microphones in real time, as they are in rugby, a development which has been approved by the FFF and French refereeing authorities, but not by the IFAB yet.