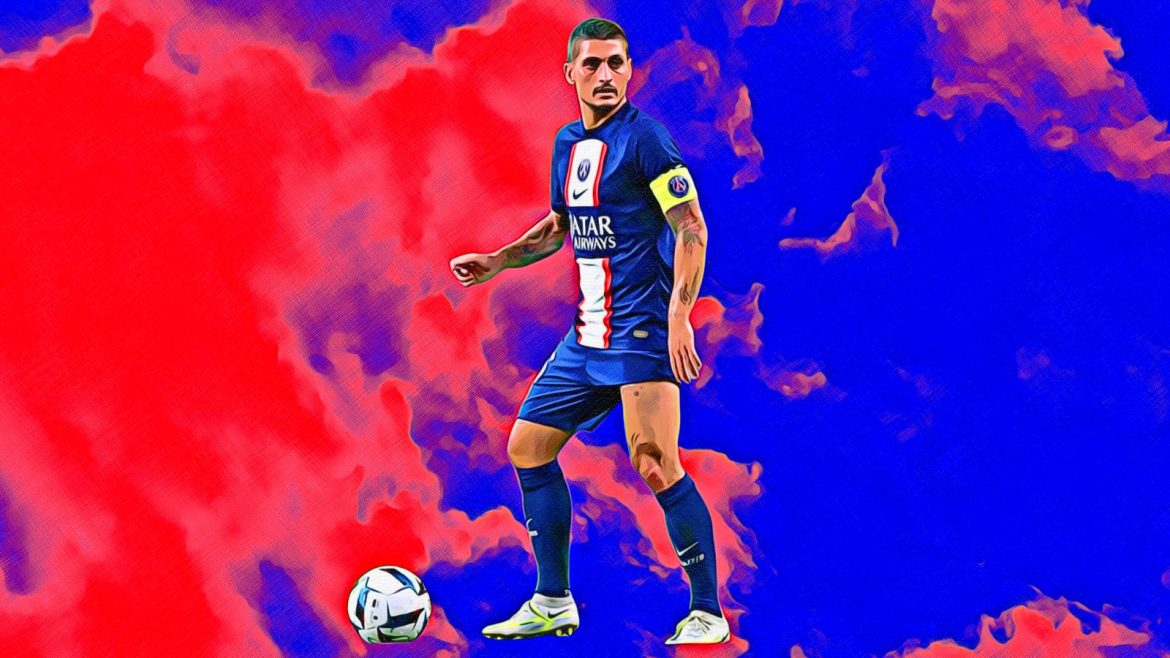 In modern football, it’s rare for players to stay at one club for a decade. It’s rare for a player to see out their contract. Occasionally, however, a player stays long enough to endear himself to a club’s fans and reach the status of a legend. At PSG, Marco Verratti is that player.

It’s not too long ago that Verratti celebrated his tenth anniversary as a PSG, having joined as a 19-year-old from Serie B side Pescara after achieving promotion to Serie A with his local club. Verratti’s talent has always been clear. Likened to Andrea Pirlo, the now-29-year-old was asked to join the youth academies of Atalanta and Inter, while Milan offered Pescara €300,000 for his services, only for Juventus fan Verratti to turn them down. Alongside fellow future internationals Ciro Immobile and Lorenzo Insigne, under the tutelage of Zdenek Zeman, Verratti and Pescara blew Serie B away. So good were his performances, that Verratti was nicknamed Guefetto or the Little Owl, mainly due to his large eyes but also because he was so busy on the ball, it looked like his head could swivel 360 degrees.

The plan in Italy for Verratti was simple. He’d join Juventus, play understudy to Pirlo and go on to lead the national team in a similar fashion. However, PSG sporting director Leonardo loved shopping in Italy and had other ideas. Zlatan Ibrahimović, Thiago Silva, Ezequiel Lavezzi and Edison Cavani all arrived in Paris from Serie A whilst Leonardo was in charge and the Brazilian wasn’t about to let Verratti get away. Juventus knew that, despite their deep pockets within Italian football, they weren’t prepared to outbid PSG for Verratti and opted for Paul Pogba from Manchester United instead.

Verratti wasn’t a superstar like the others, he hadn’t even played in Serie A, leading L’Équipe to ask: “And who are you, Marco Verratti?” Few in France had much of a clue who this Serie B starlet was. Zlatan Ibrahimović vouched for his talent, but he had to win the fans over. His second league appearance at the Parc des Prince against Toulouse saw him assist Javier Pastore and play a key role the other goal for a 2-0 win. He was substituted with seven minutes left to a standing ovation. After just two games, the PSG faithful were Verratti converts. Managed by the coach who was a key influence on Pirlo, Carlo Ancelotti, settling in for Verratti was easier than it was for most. Ancelotti knew how to harness his talent and a lot of the squad already spoke Italian.

Ancelotti wanted to take Verratti to Real Madrid while new coach Laurent Blanc’s interest in Yohan Cabaye gave the impression that he wasn’t pleased with Verratti’s risk-taking or his now-infamous yellow card collection, but PSG kept Verratti. He was perfect in midfield alongside Thiago Motta and Blaise Matuidi, one of the most balanced in Europe at that time and perhaps Paris’ best midfield trio of the QSI era, and Verratti kept improving. PSG weren’t the same without the Little Owl. Take the 2015 Champions League quarter-final against Barcelona. Verratti was suspended and PSG lined up with Matuidi, Adrien Rabiot and Cabaye in midfield up against Sergio Busquets, Ivan Rakitić and Andres Iniesta. Barcelona ran the midfield and won 3-1.

Frustrating losses of possession in key areas were slowly being eradicated, replaced by a skill which he has now mastered – luring opponents in to press him, only to either skip past them or play a pass that no one else saw. With the original trio of Matuidi, Verratti and Motta now broken up, Verratti is the senior player in the middle for PSG and the perfect modern midfielder in 2022 – when he stays fit and isn’t suspended. If you need someone to drop deep and start moves, Marco can do it. If you need someone to sit and break up attacks, Marco can do it. Someone to play killer through balls? Marco can do it.

Over the last decade, there’s a case to be made for Verratti being one of the best midfielders in the world. He’s lacking the Champions League trophies of Toni Kroos, Luka Modrić, Xavi Hernandez and Iniesta but he’s not far behind in terms of ability and has been held back by an atrocious injury record. Either way, Verratti is adored by fans and admired by those who truly understand the game. Pep Guardiola once said he was “in love” with Verratti and if you don’t love Marco Verratti, there’s a high chance you don’t love football.