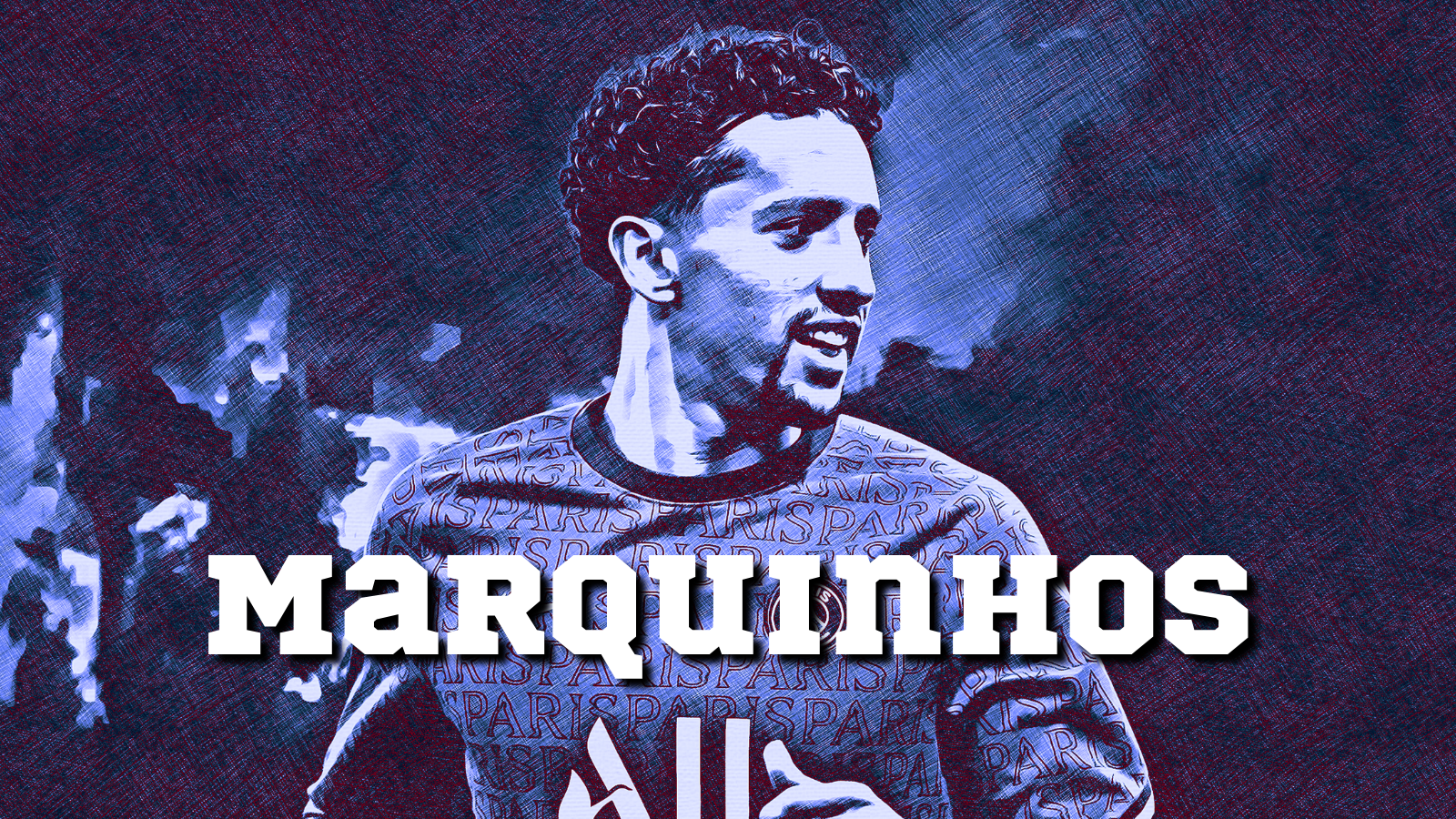 Despite PSG sitting 13 points clear at the top of the Ligue 1 table, only the most one-eyed Parisian fan would claim that the quality of their football has merited that kind of lead. That their record this season looks so good – on paper at least – is arguably mainly down to two people: Kylian Mbappé upfront and Marquinhos at the back. Although it is the French world champion who attracts most of the headlines, the Brazilian defender continues to quietly keep the defence – and, at times, the midfield – afloat, as well as finding the time to pop up with important goals at the other end of the pitch.

Clearly a true defensive player at heart – he originally played as a goalkeeper as a child – Marquinhos joined Corinthians as a defender as an eight-year-old and worked his way up to the first team, before playing a dozen top-flight matches for the club in 2012. That handful of appearances was enough to attract attention from Europe and the Brazil under 17 international was quickly on his way to Roma.

Although only 18-years-old and far from home, Marquinhos quickly acclimatised to Italian football, playing 26 Serie A matches and helping Roma to the Coppa Italia final despite struggling with injuries. Despite the very close attention of Manchester United, it was newly-minted Paris Saint-Germain who won out, paying a fee of over €30m. He made his debut (and scored) against Olympiakos in the autumn of 2013 in the Champions League.

Despite having first to compete with compatriots Alex and David Luiz to win his place alongside another Brazilian, Thiago Silva, he gradually became a safe bet on whom PSG’s conveyor belt of coaches have been able to rely. That many of his early notable performances were filling in in an unfamiliar role of right-back only emphasised his pure footballing ability and importance to the squad.

In the eight years since his arrival, Marquinhos has outlasted all his centre-back – and right-back – partners and rivals, as he has amassed a full cabinet’s worth of domestic trophies, while still managing to save his best performances for the Champions League as PSG continue to fall short of QSI’s holy grail.

Considering some of his standout performances in his first few seasons in the French capital, it is hard to think that he only established himself as an undisputed starting centre-back as late as the 2016/17 season under Unai Emery and after having helped Brazil to Olympic glory that summer. More marquee(nhos) performances followed, although the season ended in disappointing fashion with PSG losing their Ligue 1 title to Monaco and suffering the infamous 6-1 defeat to Barcelona.

This triggered PSG into Galáctico 2.0 mode with Mbappé and Neymar coming in, but in the four and a half seasons that have followed, Parisian performances and results have barely improved, with most domestic trophies hoovered up but overall perpetual disappointment in the European competition. So often, however, Marquinhos has saved PSG from further disappointment and fans are often left with the feeling that, had the whole team shown the same heart as the man who now wears the captain’s armband, perhaps they would by now have won the one trophy to elude them.

This is all the more impressive considering that, while PSG’s problem has often been that their ill-thought-out transfer policy has meant fitting square pegs into round holes in positions further up the pitch, Marquinhos has proven himself a peg that is able to fit into any hole. At times his performances have suggested that he is not only the club’s best defender but also their best midfielder. When called upon, he can move into the centre and provide not only a defensive shield but also a platform from which to build attacks.
.
Such versatility and reliability saw Marquinhos place first in 2020’s GFFN 100, and despite a noticeable but slight drop in performances this year, his fall in this year’s list is down largely to heroics elsewhere and a lack of playing identity for PSG under Mauricio Pochettino. In the second half of last season he played all but five Ligue 1 matches, PSG keeping only one clean sheet in those five matches, one of which was a costly defeat to lowly Lorient. As the season reached its climax he scored important goals against Lens and Reims as the team battled in vain to retain its title.

PSG also fell short in the Champions League, ultimately outplayed by Manchester City in the semi-final. But Marquinhos again played his part in the club’s run, scoring in the crucial first-leg win over Bayern in the quarter-final and finding the net again for the opening goal of the City tie to give his team short-lived hope.

After lifting the Coupe de France trophy, Marquinhos spent his summer at the Copa America, attempting to retain his and his country’s trophy and leading a mean Brazilian defence which conceded only three goals with him on the pitch – unfortunately one of those coming from club teammate Angel di Maria as Argentina won the final.

Normal service has since resumed this season, however. Although rarely impressive, PSG won nine of the 13 Ligue 1 matches that he started before Christmas, their only clean sheets coming with him on the pitch. He has weighed in with a timely equaliser against reigning champions Lille in yet another come-from-behind win and even notched a brace to help PSG to another sketchy victory against struggling Saint-Étienne. He has also been an ever-present as the club has moved into the knock-out stages of the Champions League. And, as always, he has maintained his excellent disciplinary record, with just two Ligue 1 yellow cards.

Clean and classy; strong in the air with great footwork; leadership and positioning; goalscorer and goal-blocker; motivated and motivator. Marquinhos has set a great example at the Parc de Princes which arguably too few have followed. But as long as he is in the team, covering for his fellow defenders, supporting his midfielders and even taking the pressure off his strikers, PSG always look stronger.