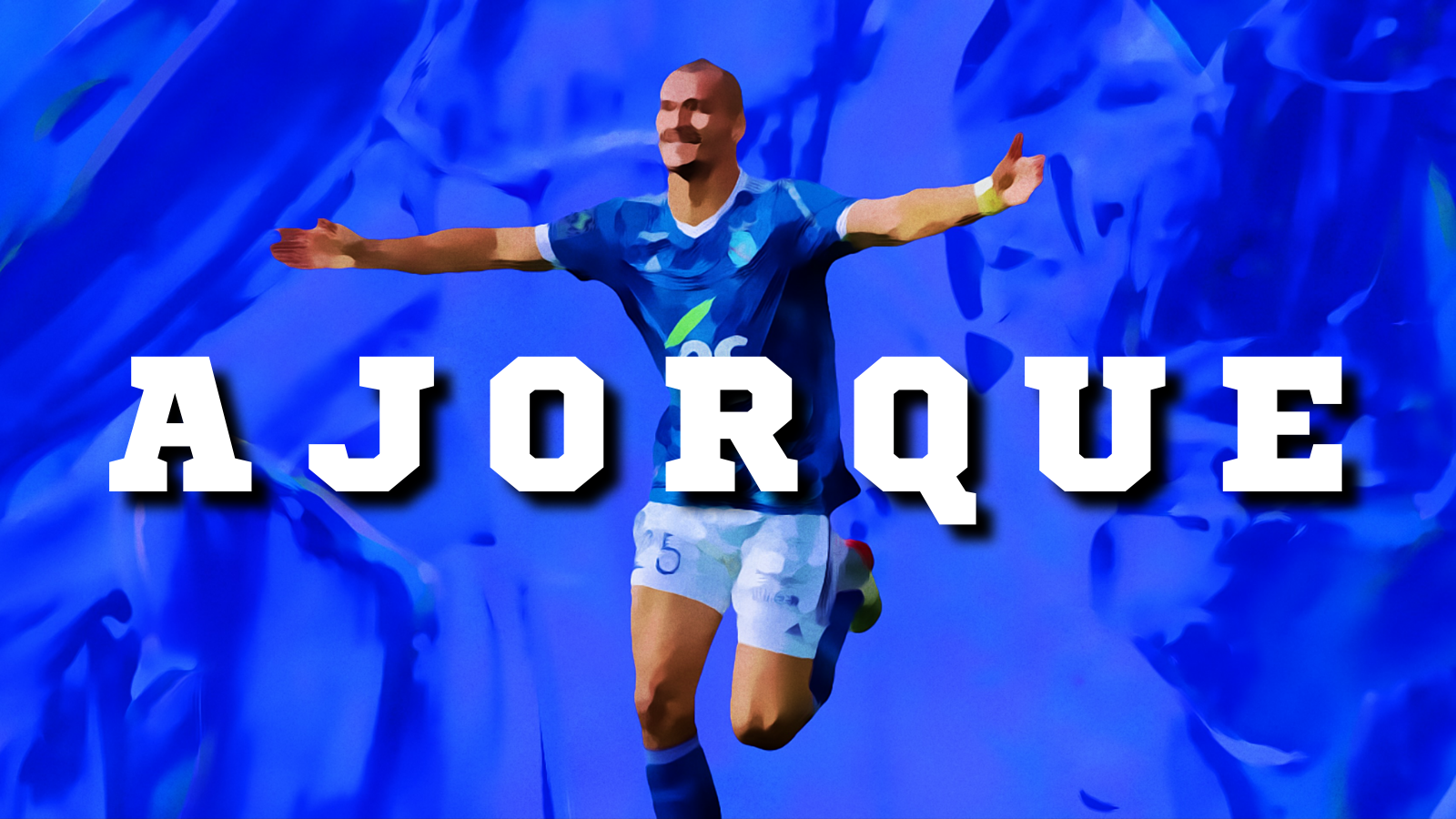 Strasbourg have one of the best attacking line-ups in Europe this season by numbers, no thanks in part to Ludovic Ajorque. The 6’6 centre-forward has already managed 14 goal contributions in 17 games, second-best in Ligue 1 behind Kylian Mbappé, and his nine goals and five assists mean only Kylian Mbappé has contributed to more goals in Ligue 1 this season. No doubt the 27-year-old will have garnered the attention of Europe’s top scouts, and there are even some who believe he has his place in the French national team, should this immense form continue.

Ludovic Ajorque was born on the island of Réunion, a French overseas territory located in the Indian Ocean around 500 miles east of Madagascar. Ludovic is of both Réunionese and Malagasy descent and was approached by the Madagascan FA in 2018 but he declined to switch national allegiance, claiming that he would rather concentrate on club football at that moment. He also has some family pedigree in the sport. His father, Jean-Noël, played for the Lens reserve side between 1990 and 1994 before spending the entirety of the rest of his career on his home island of Réunion.

Ajorque arrived in Metropolitan France in 2012 when Angers took a chance on the then 18- year-old. At 20, he signed his first professional contract but he would only ever play a single game for Angers, in the first round of the Coupe de la Ligue. The following two years he was loaned out, firstly to Le Poiré-sur-Vie VF then to Luçon VF, both third-tier teams at the time. Considering where he is now, it’s shocking to think that by his 22nd birthday Ajorque had never made a single appearance in the top two tiers of French football.

In the summer of 2016, Ajorque transferred to then Ligue 2 club Clermont. In his first season, he scored five and assisted four in 28 league appearances, helping the Auvergne club to a mid-table finish. The following season he was a lot more prolific. In 36 games he managed 14 goals and three assists, making him the sixth-highest goalscorer in Ligue 2. That earned him the opportunity to play Ligue 1 football with Racing Strasbourg. He has so far played 118 games in all competitions for Le Racing scoring 47 goals and assisting 17. Notably, he holds the record for the quickest brace scored in Ligue 1, scoring in the 69th and 70th minute in a 2-2 draw with Lyon during the 2018/19 season – 103 seconds between the goals.

Ajorque’s goalscoring ability has seemingly gone unnoticed for a while now. Last season he finished the season on 16, making him joint fourth top goalscorer alongside Burak Yilmaz, Gaëtan Laborde and Kevin Volland. An incredible feat considering his club only survived relegation on the final day. This season, after 19 matchdays, the Strasbourg man is joint third in the scorers’ table with nine goals from his 17 games.

It’s not only his scoring record that impresses, he has the ability to bring the best out of his teammates too. Speaking to Téléfoot, Strasbourg midfielder Adrien Thomasson explained: “He’s an altruistic player, who doesn’t just think about his own statistics.” It’s a fact backed up by his five assists in 17 games this season. Thomasson also remarked on his work rate and willingness to defend. “There’s also his way of giving it all, defending for the team. He’s the first to press and the first to come back and defend.” According to FBRef, Ajorque averages 1.18 clearances per 90 minutes, putting him inside the top 12% of attackers in Europe’s top five leagues this season, and 1.3 tackles per 90 (top 9%). Being 6’6, he’s also an enormous asset on set-pieces at both ends, winning 5.27 aerial duels per 90 and ranking in the top 6% of attackers.

After an impressive start to the 21/22 season, some fans are starting to consider him a candidate for the French national team, although he does have very strong competition in his position. Didier Deschamps doesn’t tend to shuffle his squad between international breaks, with any changes to his squad often being injury-related or due to extreme drop-offs in form.

For the World Cup in Qatar this year, Ajorque is up against Kylian Mbappé, Karim Benzema and Wissam Ben Yedder. For a fourth option, Deschamps has a large pool of French talent at his disposal. Marcus Thuram was called up for the Euros this summer and has four caps to his name but suffered an injury in August which put him out for two months. The extremely talented Gaëtan Laborde is yet to win a cap despite his impressive form for Montpellier and now Rennes in 2021.

The one thing that Ajorque has on those players is his similarity to Olivier Giroud, who was consistently picked by Deschamps due to his ability to play the role as the hold-up striker who brings others into play. This comes with the caveat that Ajorque is not exactly the most versatile player. He doesn’t have the athleticism or the dribbling ability to play out wide if needed that Marcus Thuram does, for example.

If any club were interested in “Le Volcano Bomber”, as the Strasbourg fans have affectionately named him due to his Réunionese roots (Réunion being a volcanic island) and his hard-man looks (bomber as in the album by rock band Motörhead), his market value is currently estimated at around £11m. However, it’s doubtful that the club would be interested in selling. Strasbourg will be looking to retain his services at all costs to help them push for the European spots this season.