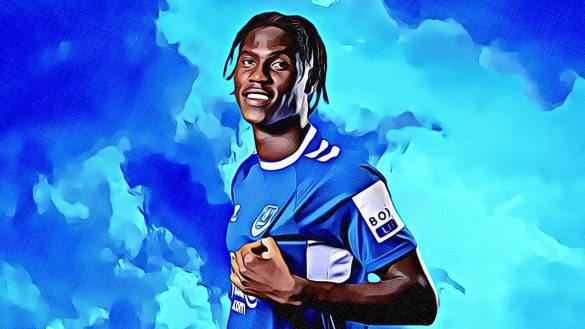 French Football has only seen 1344 league minutes of Amadou Onana and he’s already leaving for £27m, four times more than what Lille paid to sign the midfielder just a year ago.

Like William Saliba, Victor Osimhen, and Wesley Fofana, it took what amounts to just a small highlights package for first West Ham and now Everton to be convinced that the central midfielder was the real deal. Having joined the northern club as Leicester City-bound Boubakary Soumaré’s replacement last summer, the 20-year-old Onana was taking a big step up from the German second division after a season of senior football with Hamburg. For him, though, a man who speaks five languages, that wasn’t too daunting.

Soumaré gave an extra boost in defensive midfield during the second half of Lille’s title-winning campaign, notably contributing to that success, but Onana has replaced that output and provided even more, fitting in well with Lille’s last coach Jocelyn Gourvennecc’s emphasis on counter attacking football.

The Belgian stands at 6’4 but remains lean and agile, which helps him carry the ball through tackles. Statistics from FBRef may not show it, with Onana sitting twelfth in the squad for progressive carries (that’s moving the ball 10 yards closer to goal in the final 60% of the pitch) per 90 minutes, but that may be down to the fact Onana receives the ball deep in his own half. Fans of Les Dogues still recognise him for excelling as a dribbler. The Senegalese-born youngster retains the agility and sharpness of a much smaller midfielder and he can weave in and out of challenges. If anything, he’s too lean, as he struggles to impose himself on opposition defenders and protect the ball.

The quality of the former Anderlecht in no secret, Monaco coach Phillippe Clement said he tried to sign him when at Club Brugge, before Lille swooped. Perhaps that’s why Onana was shortlisted by Monaco as an Aurélien Tchouaméni replacement earlier this year. Another reason could be that the new Madrid signing profiled similarly to Everton’s latest arrival in terms of defensive output, with both midfielders sitting comfortably inside Ligue 1’s top 20 for tackles and interceptions per 90 last season. Onana’s footballing IQ is the main driver behind those stats rather than his physicality, consistently reading opposition passes.

In terms of output in the final third, the Belgium international has just two senior goals to his name. That may change in future, though, as, despite starting last season as a more defensive presence, by the end of the year he’d quickly found himself being pushed forward by Gourvennec. In fact, against Chelsea in the Champions League round of 16, the coach decided to deploy Onana as a number 10. Though this didn’t work and he was subbed off after 65 minutes, it goes to show the versatility that some tacticians see in his game.

In fairness, the man himself fails to provide much clarity on where he sees his best position. In an interview with RMC Sport last October, he cited Paul Pogba as “daily inspiration” while also affirming: “I think I can play somewhere other than midfield, I am able to play in central defence.” Where Frank Lampard sees his new signing should be more clear, as the Toffees lack a player of Onana’s skill set in central midfield. It’s a potentially risky move for the youngster, considering his predecessor Soumare’s struggles in England and the lack of experience on his own CV.

However, for a man as mature as Onana who has rejected approaches from other clubs like Napoli in the past, he must recognise something in the struggling side that will push his career forward.