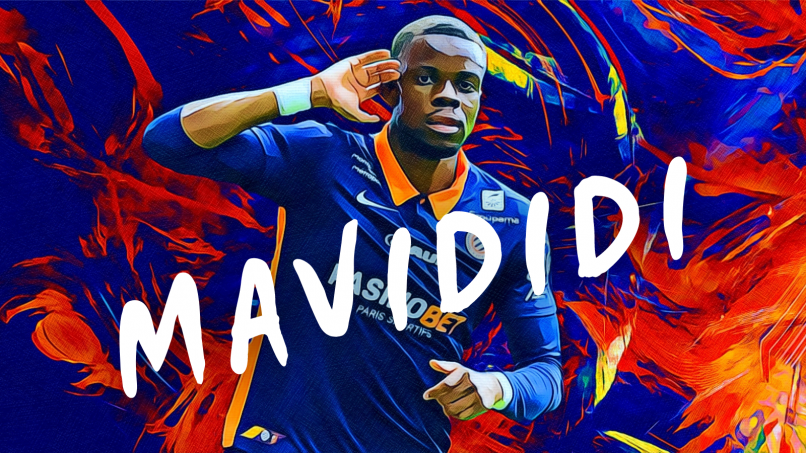 As an Englishman to have played in Ligue 1, Stephy Mavididi is part of a very small minority. But considering some of the failures of the past, including Joe Cole and Joey Barton, Mavididi has been rather successful.

The now 23-year-old forward’s time in Ligue 1 started when he arrived on loan at Dijon from Juventus in the 2019 summer transfer window. Dijon enabled him to gain his first top-flight experience and, after 10 goal contributions in 28 games, Montpellier made the move to bring him to France permanently.

Since arriving at the Stade de la Mosson, Mavididi has become increasingly instrumental for an impressive Montpellier attack. In the 2020/21 season alone, he managed to net nine times in Michel Der Zakarian’s high intensity attacking set-up. Five of those strikes came in the second half of last season on an impressive run of scoring which saw the former Arsenal man score five times in the space of six Ligue 1 matches.

The most impressive performance from the 23-year-old in the second half of last season came in a 2-1 win over Rennes in which he scored a brace to win the match for his side. For his first strike, he expertly stayed onside from a Téji Savanier free-kick and, at full stretch, managed to send the ball home beyond a hopeless Alfred Gomis for his first goal in almost two months. His second strike was even more impressive. Teammate Elie Wahi was unable to capitalise on a great chance before his rebounded effort fell to an onrushing Mavididi who was able to beat Da Silva with ease thanks to a lovely scooped touch before smashing home.

The former England U21 international wasn’t able to finish the season as emphatically but his impressive eye for goal and strikers instincts certainly raised a few eyebrows in France and across the channel back home in England.

Mavididi’s instincts in front of goal are exceptional due to the time he spent occupying a striker’s role in Arsenal’s youth academy. As a professional, he features mainly on the left-flank due to his right footedness and the ability to make diagonal runs and cut in to cause defenders problems but his versatility is one of his best assets and there have been times where he has featured both through the middle and on the right flank for Montpellier.

Before the start of the current season, Mavididi was rumoured to be attracting interest from other Ligue 1 clubs including Marseille. Considering his impressive start to life in France, it is no wonder that teams in European competition were interested in his services. A move didn’t transpire in the summer but that hasn’t affected his performances in the first half of the 2021/22 season. In 18 appearances this season, the former Preston and Charlton loanee has scored six times which is already two-thirds of the tally he achieved in 40 appearances last season.

Mavididi is undoubtedly an impressive finisher and his 15 goals for Montpellier prove that, especially for someone relatively inexperienced at the top level, but chance creation, however, isn’t his strongest suit and his stats show that too but this season there has been a noticeable improvement. After going 40 appearances without an assist last season, the Derby-born forward has managed to assist three times this term.

One of the ways he’s creating these dangerous chances and managing to convert frequently is via some electric pace. Whether it be running in behind or speeding onto a loose ball, Mavididi often manages to create opportunities and space with his speed and this creates dangerous chances for teammates, or one for himself to shoot. However, with such an emphasis on shooting, it wouldn’t be a surprise to see him move into a more central position more often in the future.

At just 23 years of age, 2021 was a major year for Mavididi’s development as he continued to thrive in France’s premier division. If he’s able to replicate this form going forwards and improve areas of his game like chance creation and assists, Montpellier have incredible talent on their hands. He’s far from the finished article but the Englishman has all the potential to become one of the best attacking talents in Ligue 1.