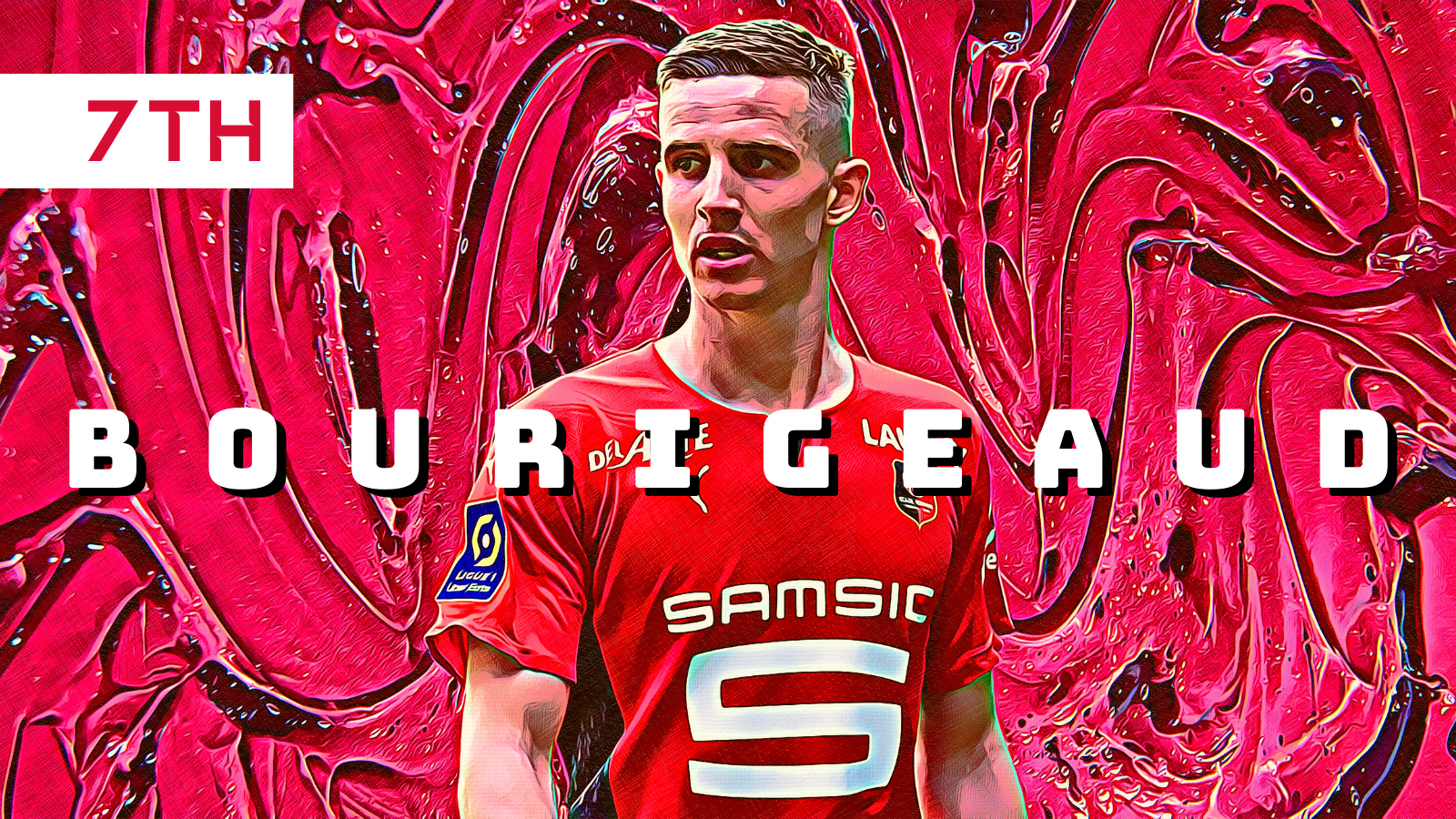 ‘Presidential candidate’ was not the title Rennes midfielder Benjamin Bourigeaud was aiming for at the start of the campaign. However, in the midst of a career-best season, the 28-year-old’s form was such that Rennes fans with a sense of humour added Bourigeaud’s name to their blot papers during France’s presidential election last month. One even posted a poster to Twitter that implored: “Vote Bourigeaud.” Bourigeaud may have been pipped by Emmanuel Macron in the end, but his year has been victory-filled nonetheless.

If there was an award for the most improved player on this list, few could compete with Bourigeaud. Thanks to shrewd transfer business from sporting director Florian Maurice and the flowing football engineered by Bruno Genesio, Rennes have brought more joy to Ligue 1 than any other team in 21/22. Within such a compelling season, the balletic Lovro Majer and Rennes’ countless flowing team goals have been impressively surpassed by Bourigeaud’s form as the club’s leading headline.

The 28-year-old Frenchman has long been a consistent, skilful creator but his vision, astute movement and interplay have been set free by Genesio’s freewheeling style in the last year or so as well as the fresh influx of imagination alongside him. Finishing the season in double figures for league goals and assists (12 assists, 11 assists) Bourigeaud’s effect on Genesio’s team has increased exponentially.

Such decisive form has bred confidence and authority, underlined by perhaps Ligue 1s most eye-catching moment of skill. Sumptuously plucking a looping cross-field ball out of the air with his first touch against Brest, Bourigeaud’s second backheeled the ball between a defender’s legs to create an opening on his flank. Such nonchalance and swagger weren’t evident this time last year.

Although aided by the intelligent running and physicality of Rennes’ forward line, no one in Ligue 1 has been so deadly from crosses or set-pieces this term. The flat, whipped nature of Bourigeaud’s deliveries is strikingly reminiscent of a young David Beckham’s – before the Englishman’s iconic technique became overly stylised leading to more floated balls more similar to a thrown Frisbee than Bourigeaud’s loosed arrow-like deliveries. A stylish long-range free-kick goal against Bordeaux in January only helped the comparison too.

Considering Martin Terrier’s prolific year, the low-key excellence of centre-back Nayef Aguerd and some irresistible performances from Majer, it’s no minor compliment to say Bourigeaud is now Rennes most important player. It’s something Genesio clearly recognises, making Bourigeaud the sole un-droppable man, playing 48 games this season across all competitions. His only absence, a Coupe de France tie in January was due to illness. Aside from Kylian Mbappé, no one has produced a more effective, more consistent, or imposing individual campaign in France.

That impact is underlined by only Lionel Messi and Mbappé managing more assists in Ligue 1, just Mbappé and Dimitri Payet providing more short-creating actions and his 21/22 expected assists of 13.2 being the highest across Europe’s top five leagues.

According to FBRef, in France, he also finished with the fifth most progressive passes, the third most crosses, the most successful crosses and the second most passes into the area. A record of 121 key passes was the most impressive tally, however, being by far the most in Ligue 1. Marseille’s Dimitri Payet was second with 101, while Jonathan Clauss’ 76 made the Lens wing-back a distant third.

With just a year to run on his current contract, potential suitors have sensed an opportunity with both Roma and especially Lazio interested in the 28-year-old ahead of the summer. Earlier this month, Bourigeaud remained coy on his plans for next season, saying that “there will be a period of reflection, I’ve never hidden my ambitions, but there’s nothing to say that I’ll no longer be at Rennes next year.”

Substituted against Nantes late on during Rennes’ last home game of the season, Bourigeaud was given a standing ovation from the club’s fans who feared a farewell outing. “During the lap of honour, you think back to all the times you’ve had in the stadium,” the player said afterward. “We’ll see, the story may not be over.”

Weary of losing a key player on the cheap, Maurice explained that the club had already moved to open talks over an extension. “The idea is to keep our best players and to keep the central core of this squad,” Maurice said. “We’ve discussed [an extension] with his agent but I think you have to take your time, digest the season and we’ll try to do everything to keep him.”

Although uncapped thus far, in World Cup year, Bourigeaud could be a useful option for Deschamps. With Antoine Griezmann underperforming, the Rennes midfielder would be an adept creative understudy and, if Deschamps persists with a 3-5-2 formation, Bourigeaud’s deliveries could also become a major threat from right-wing-back. Although a more defensive role than he’s used to, usually playing on the wing for Rennes, the equally attack-minded Kingsley Coman was also used there during the March friendlies to good effect.

Whether Bourigeaud lands in Rome or Qatar next season, or stays with Rennes, few have matched his unerring consistency and level of influence on any one team across Europe this season. He may not be president of France, but he does end the season as the undisputed King of Roazhon Park.