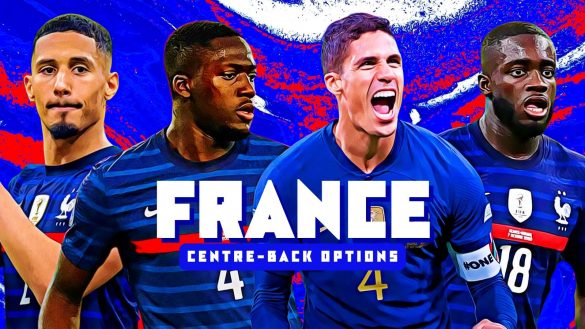 The 2018 centre-back partnership of Samuel Umtiti and Raphaël Varane was the bedrock upon which France built to win the World Cup. Yet, two days away from France’s opener, against Australia at the Al Janoub Stadium, it is still unclear how Didier Deschamps will set up the central partnership within his back four after last-minute injuries created a defensive conundrum for the France boss.

It’s been one of the questions that has dominated France’s build-up to the World Cup alongside the uncertainties about which midfield set-up might replace key absentees N’Golo Kanté and Paul Pogba. The last-minute withdrawal of PSG defender Presnel Kimpembe and the race against time to get Raphaël Varane fit has left the door open to a new-look partnership heading into the World Cup.

During his time in charge, Deschamps has insisted on playing a left-footed player in the left-sided centre-back position. However, the absence of Kimpembe means that there are no left-footers remaining in the squad. So what are the possible solutions to this defensive headache for Deschamps?

If Raphaël Varane is fit enough for Tuesday, he would be the number one choice for Deschamps on the right side of the central defensive pairing. However, Varane hasn’t touched a ball (on the training pitch nor competitively) since his injury playing for Manchester United at the end of October. He might be able to play in the Australia game if he takes part in collective training this weekend. A fully fit Varane would be the ultimate boost in defence for France, as his experience alongside a much more inexperienced partner on the left-hand side would be vital.

Deschamps told RMC Sport earlier this month that he would prefer to deploy Liverpool man Ibrahima Konaté and Upamecano due to their experience playing on the left, despite being right-footed. However, Deschamps has actually been using this pairing during training matches in the build-up to the Australia game in the absence of Varane. In the case of Varane’s participation in the opening game, it would be logical that Bayern Munich’s Dayot Upamecano would be next in line to start due to his experience as well as an ability to play on the left of a central two.

Upamecano has improved significantly at Bayern Munich this season, yet, for France, he’s looked shaky at times – especially during recent disappointing Nations League results back in September. If Upamecano was to line up with Konaté at the back, France would possess a physical presence at least, but it’s one that doesn’t exude assurance.

William Saliba is the name on every Arsenal fan’s lips and, based on his form in the Premier League, it would be hard not to pick him alongside Varane on the strength of those performances alone. His defensive reading of the game is second to none, while boasting a physical presence and a level of maturity which surprised a lot of fans and pundits in the Premier League, given he’s still just 21 – although we already saw the signs of that talent at Marseille in Ligue 1. The problem here is that, again, Deschamps would be unwilling to play Saliba on the left side where he would be considered less comfortable. Jules Koundé could be put in a similar category, despite having impressed with Barcelona this season.

If Saliba was to line up with Upamecano in the case of Varane’s absence, that would be the most compelling combination in terms of a balance between physicality and passing ability – but the worry would be a lack of World Cup experience in the France shirt between the two – in a similar vein to that of a Konaté or an Axel Disasi choice. Meanwhile, Benjamin Pavard and Lucas Hernandez could also take one of those positions, but they look set for the left- and right-back positions respectively – with cover in their more natural positions not looking the best.

Thus, in this context, a return to action for Raphaël Varane would be the most welcoming outcome for Deschamps – but it also highlights a concerning lack of experience at the back for France, which looks to have been worsened by a lack of flexibility on Deschamps’ part, not selecting the likes of wing-back Jonathan Clauss for the final 26-man squad. No pressure to get fit then, monsieur Varane.