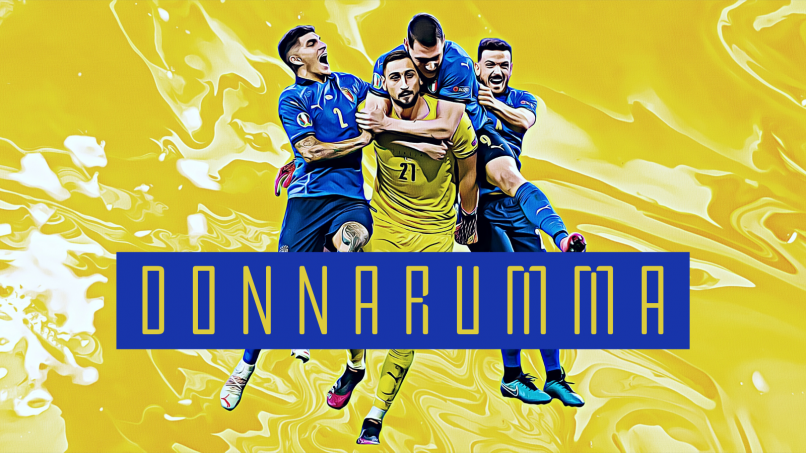 Although his contract situation increasingly overshadowed it towards the end of the season, Gianluigi Donnarumma’s contribution to Milan’s second-place finish – their first time in the top four in eight years – cannot be understated. Since making his debut for the Rossoneri aged just 16, immediately making the number one spot his own for the following six years, the Italian’s dominating presence in goal was one of the few constants of a hectic half a decade for the club.

He started all but one Serie A fixture in 2020/21 – a sixth consecutive season in which he made more than 30 league appearances – and starred in a Europa League campaign unfortunately ended by Manchester United in the knockout stages. He kept 14 clean sheets domestically, including five consecutive shutouts to close out the season, and was duly named Serie A’s goalkeeper of the year.

A very public falling out with the fans due to his contract situation made for a bitter end to the campaign, as the nickname ‘Dollarumma’ in particular caught on. This was compounded by a second half to the season in which his team dropped off and allowed their city rivals Inter to overtake them and win the title. Losses to Spezia and Sassuolo, and draws against Sampdoria and Udinese, harmed their title credentials after going unbeaten for the first 15 games of the season.

With the shot-stopper’s contract expiring in the summer, the Milan management had tried on numerous occasions to tie him down to a new deal, only for his and super-agent Mino Raiola’s demands to scupper any chances of an extension. As the final weeks of the season drew on, it became apparent that neither party was willing to budge on their position, and talks came to a standstill.

Eventually, the signing of Lille’s title-winning goalkeeper Mike Maignan would be the final nail in the coffin for Donnarumma’s time with the Rossoneri. The 22-year-old would leave his formative team having played a crucial role in their return to elite European football, but having seemingly soured his relationship with his home support beyond repair. The boos and whistles he was subjected to on his return to the San Siro in the Nations League attest to the fact that the wounds of his departure are yet to heal.

Clearly, though, the highlight of Donnarumma’s year was an all-conquering EURO 2020 campaign. From consecutive group stage clean sheets to vital penalty shoot-out saves against both Spain and England, this was the summer the goalkeeping prodigy announced himself to the continent. His penalty save from Bukayo Saka to win the title – made all the more emphatic by his muted reaction, strutting away from the scene – was emblematic of the growing confidence and stature he gained at his first international tournament. Even if he later admitted that he was genuinely not aware that the shoot-out had ended there and then, it was an image that encapsulated the calming authority Donnarumma exuded throughout the summer.

Donnarumma was duly named player of the tournament by UEFA, and his status as the heir to Gianluigi Buffon was cemented. Although Milan’s tifosi are yet to fully forgive him for the way he left, he was widely praised across the rest of the country and his money-grabbing image was largely shaken off, in favour of that of a national hero.

Life in Paris has not been as idyllic. Having signed a five-year contract on his return from the Euros, Donnarumma joined the cohort of internationals to sign for the club in a star-studded summer. Despite arriving as world football’s premier goalkeeping prodigy, he has inevitably faced the competition of an equally impressive Keylor Navas. The Costa Rica international had established himself as the hitherto undisputed number one who extended his contract in April, after emerging as the answer to PSG’s past goalkeeping problems.

Mauricio Pochettino has so far split this season’s matches more or less equally between the two. The Italian has admitted that alternating between a starting spot and the bench has not been easy, but cited the competition with his colleague as a source of motivation. Arguably, the fact that Navas has been the first credible challenge to Donnarumma’s starting position for a while will have had a positive effect for the long-term. With the objective of dethroning the former Real Madrid man, the Italian will have had no time to rest on his post-Euros laurels. Instead, he will have had to get his down and prove himself in a new club, and in a new country.

He notably featured in PSG’s flagship result of the season so far, a 2-0 win over Manchester City in the Champions League group stage, and kept five clean sheets before Christmas. His commanding presence – standing at 1.96m – and deceptively agile reflex-saves have been on show throughout the first half of the campaign as he sought to stake his claim as Mauricio Pochettino’s first choice.

The tide also seems to be beginning to turn in his favour, with Donnarumma being entrusted with a majority of the late-November and December matches. With Navas beginning to show a few weaknesses – his inability to stop Séko Fofana’s shot in the draw against Lens or his needless sending off against Nantes spring to mind – it would come as no surprise were the Italian to take over full-time duties moving into the second half of the season.

If all goes to plan, PSG have finally found a long-term solution to their perennial goalkeeping problems, in the form of Italy’s likely number one choice for the next decade or two.