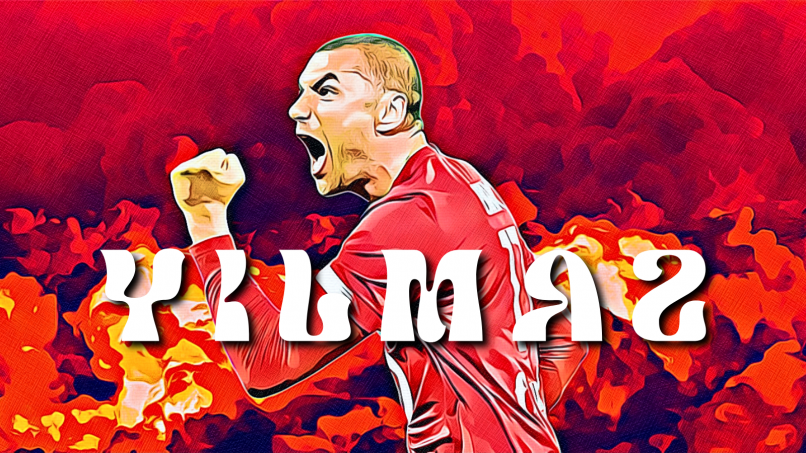 Going into the 2020/21 season Burak Yılmaz was a name that was given little attention, with Lille’s regional paper La Voix Du Nord calling him a replacement for outgoing Loїc Rémy. Not the biggest of tasks, given Rémy hadn’t reached 1000 minutes during the previous season. Coming in on a free, Yılmaz was very much seen as a back up man.

18 months later and the ‘Kral’, Turkish for ‘king’, can only be considered a monumentally successful signing. His Euro 2020 campaign may have been a career low point, and his form has admittedly stuttered since August. However, for a period of time, Burak Yılmaz was possibly the best player in France.

Up until January 2021, Yılmaz had been a modest success. Averaging a goal every 2.2 games, hitting seven before New Year’s day in Ligue 1, as more attention was paid to the struggles of his striker partner Jonathan David. Two games and nine days into the new year, Yılmaz had added two more goals. His consolation against Angers ended up being worthless, but a winner three days later against Nîmes proved more important. Disastrously though, Yılmaz picked up a calf injury which kept him out from January 10th all the way to the 14th of March.

After playing 12 minutes against Monaco, Lille were three points ahead of PSG. Yet following a shock 1-2 defeat in the return match against Nîmes, Les Dogues were sent back to second place. Too far behind on goal difference, Lille had to make sure every point counted with their talisman back. Yet he had only hit one of his six shots on target in 90 minutes against Les Crocos.

Christophe Galtier’s side then fought for a hard-earned win against PSG the following week, putting Lille back ahead in the table. However, Yılmaz was limited to just 17 minutes off the bench. Galtier had previously said he was anxious about rushing Yılmaz back and causing a repeat to his calf injury.

From then though, after defeating PSG and with seven games left of the season, Burak Yılmaz became red hot. He rolled the years back to the days of 2012, when he scored 32 goals in a season for Trabzonspor. Yılmaz made French Football his stage for the most dramatic of plays, one where he was the main protagonist.

Free-falling Metz were the first to face his wrath, as he belted in Renato Sanches’ pass into the near post in a 0-2 victory for Lille. Another 90 minutes followed against Montpellier, where Yılmaz’s attitude on the pitch helped galvanise Lille to a late equaliser. He constantly barked for the ball in shooting positions. If Benjamin André symbolised the unattractive good work of Les Dogues in 20/21, Yılmaz symbolised the pugnacious bark and bite.

Ligue 1’s public image undoubtedly took a hit or two in the latter half of last year. The 20/21 season was a high point for the league though, and Lyon game with Lille on the 25th of April got the world talking. At 2-0 down and struggling towards half-time, Lille’s title run looked done and dusted. PSG won the previous day. Should Lille lose, they would have sat two points behind Paris with just four games to go.

A free kick from 25 yards held little threat to Lyon in the added minutes of the first half. It was only when Yılmaz pelted the dead ball into the top left hand corner that Rudi Garcia perhaps sensed what was coming. Just under 15 minutes into the second half, Yılmaz broke into the box before squaring to Jonathan David for Lille to equalise. It was his fifth and final assist of the season. Then, with five minutes left, a long ball forward from Sven Botman flicked off the head of Yusuf Yazıcı, in behind on to Yılmaz. One on one, he summoned the speed of a man a decade younger to charge away from Lyon’s defenders, before cutely lobbing Anthony Lopes.

While the performances against Nice, Lens and Angers lacked the dramatics of the comeback in Lyon, they boosted the momentum of Yılmaz’s incredible end to the season. His left-footed screamer against Lens left Jean-Louis Leca cemented to the ground, helplessly watching a shot awarded goal of the year by the UNFP sail into the top corner.

His penalty against Angers ended up as the winner that decided the Ligue 1 season. Yet he still couldn’t rest until the whistle was blown. After Angelo Fulgini scored to cut Lille’s lead to 1-2 with minutes to spare, an anxious Yilmaz, draped in a Turkish flag, itched up and down the touchline. The ferocity and will to win lasted right up until the end of 20/21, making him all the more endearing to his adoring fanbase.

That same fanbase felt the frustrations of Yılmaz a little under a month later. He captained a buoyant, optimistic Turkey to Euro 2020, but sadly his national team career hit a new low as Turkey finished bottom of their group with three losses.

After hitting 16 goals and six assists in his debut season, Yilmaz has since added just seven goal contributions in his 16 Ligue 1 games this season. He’s even been called into question by Lille fans, after he stormed down the tunnel following his substitution against Brest in mid-October. He’s missed some gilt-edged chances too, quite unlike Yılmaz.

The name Yılmaz in Turkish is linked to the English word ‘indomitable’; impossible to subdue or defeat. After the sky-highs of 2021, the more frustrating lows threatened to dampen the now-36-year-old Yilmaz’s reputation. Living up to name though, he rose back up.

With Lille needing a win to top their Champions’ League group for the first time in history, the indomitable Turk popped up once more. A side-footed finish against Wolfsburg opened the scoring in Lille’s 3-1 win on the final day of Group G, and once again cemented Burak Yılmaz’s name into the Lille history books.