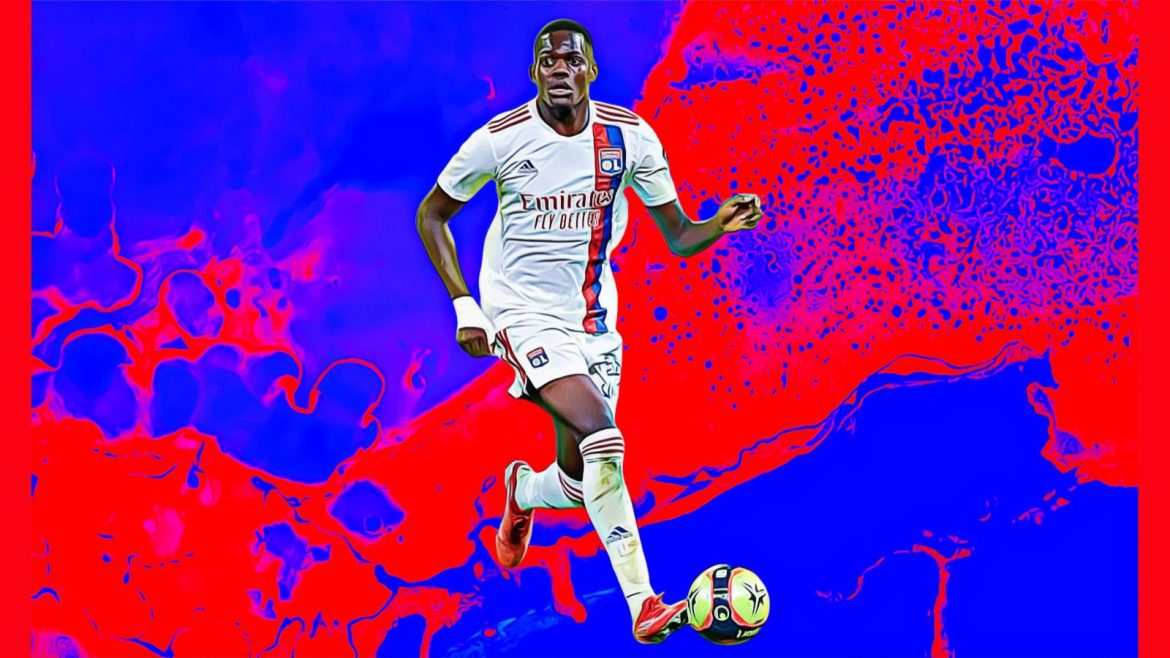 The latest talent to emerge from Lyon’s academy is 19-year-old centre back Castello Lukeba, who, despite his young age, is already proving to be one of the best centre-backs in Ligue 1. Lyon will have to work hard to convince the defender to stay at the club long term though, with attractive offers from Europe’s elite no doubt on their way.

Born in Lyon in December 2002, Lukeba grew up an OL fan, joining the club’s academy in 2011 at just eight-years-old. Also Angolan in heritage, the defender has opted to play for France and was called up to long-term coach Sylvain Ripoli’s France under 21s squad in September, having made his debut for Les Bleuets back in March. Speaking to local paper Le Progrès, a former coach at Lukeba’s youth side in Saint Genis Laval described how the coaching staff immediately recognised his talent, even at such a young age. This same can now be said for many Ligue 1 observers.

Boasting a prolific academy, Lyon are renowned for their ability to produce and nurture young talents and the fledgling centre-back made his debut for Les Gones on the opening day of the 2021/22 season in a 1-1 draw against Brest. In a torrid season for Lyon, Lukeba proved to be one of few positives for OL fans and was nominated for Ligue 1’s Young Player of the Season award, such were the quality of his performances during his debut year in the division.

Primarily featuring as a left-sided ball-playing centre back, where his progressive nature and forward thinking are key to his game, Castello ranks highly against his peers from Europe’s top 5 leagues in all areas. By the start of November, the French defender was is in the top 13% of centre-backs across those divisions for passes attempted per 90 minutes (71.14) over the last year. His pass completion was at 89.2% for the same period while the teenager made the continent’s top 15% in terms of progressive passes (3.42), interceptions (1.65) and dribbles completed per 90 (0.41) as well as making the top 12% for ball recoveries, according to FBRef. The young defender plays with his head up, looking for dangerous openings or Maxence Caqueret and Corentin Tolisso ahead of him in midfield to help spring an OL attack.

However, Lukeba’s maturity has been the most impressive aspect of his rise, as praised by both teammates and coaches. Earlier this year, French international and former Lyon captain Léo Dubois, now at Galatasaray, said “he’s a young player, though there’s a lot of maturity in his game. He’s a great listener, he’s hungry to learn. He’s a player that’s showing his qualities, I’m happy for him.”

However, standing at just 6’0, Lukeba is far from the most physical of presences at the back and this is reflected in his aerial stats where he manages to win just 2.15 aerial duels per 90, placing the 19-year-old in the bottom 30% of centre-backs across Europe’s top five leagues in the last year. From a defensive perspective, some lingering naivety to Lukeba’s game, understandable for someone so young, is slowly ebbing away. Positionally, he’s usually in the right place at the right time and, even when he isn’t, the centre-back is able to rely upon his recovery pace, which has rescued him and his team on a few occasions since his emergence at OL.

Nevertheless, as a young, French, ball-playing centre back out of Lyon, comparisons have already been drawn with France World Cup winner, Samuel Umtiti, who emerged from the OL academy in 2012. However, the two player’s respective trajectories were somewhat different. France knew of Umtiti’s talents well before he ever played for the first team and anticipated his rise to the top but Lukeba is something of an unexpected success. Of this generation, attacking midfielder Rayan Cherki has received much more attention. Even so, with Damien Da Silva aging, Thiago Mendes out of place as a defender and Jérôme Boateng underperforming, it’s no exaggeration to say that Lyon’s defence is now led with some authority by Lukeba.

Without European football on offer, interest in Lyon’s better players will be rife, with Lukeba one of the more attractive targets as quality young left-footed centre-backs are hard to come by. With his contract running until 2025, Lyon will be desperate to hold on to their star talent after losing key players Bruno Guimaraēs and Lucas Paquetá in the last two transfer windows, as they aim to avoid a second consecutive season without European football for the first time since the 1990s.

As a result, Lukeba’s current £18m Transfermarkt value would likely fall well short of OL’s asking price this coming January should interest turn into concrete offers and interested parties such as Borussia Dortmund, Real Madrid, Chelsea and Manchester United would have to lodge a sizeable bid to convince Lyon to sell their teenage defensive prospect. Regardless of that potentially high price, the 19-year-old Frenchman is a smooth operating, technically gifted, powerful centre-back who has displayed remarkable maturity and he would be worth every penny.