FEATURE | Lucas Paquetá – The Warrior and The Dancer 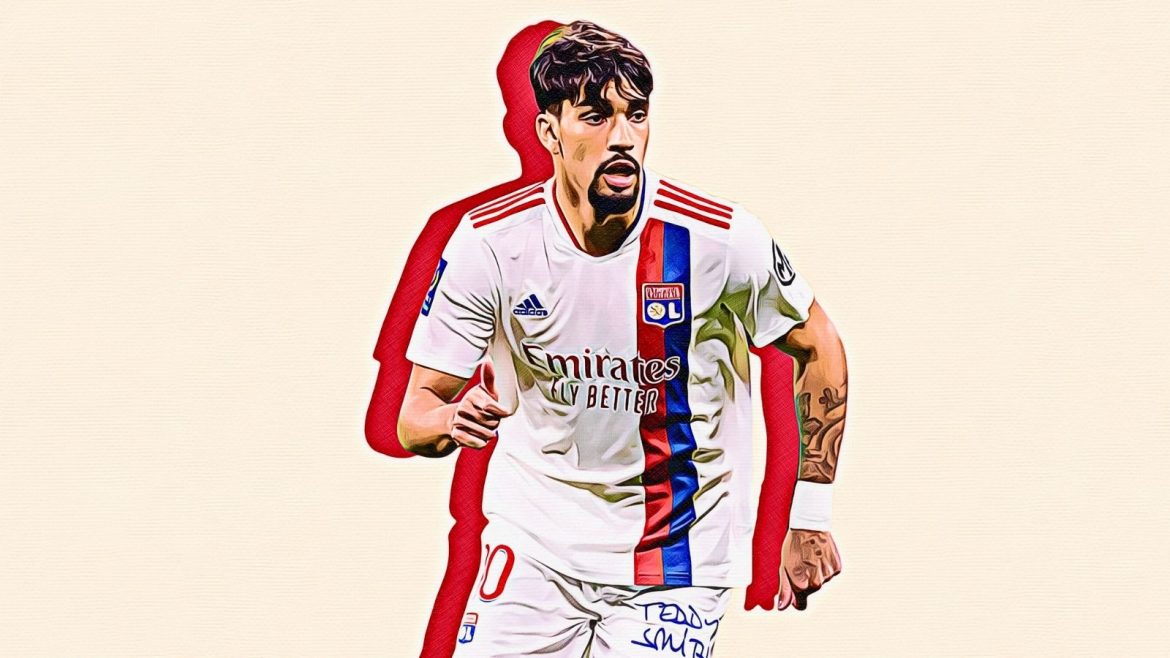 “I love to dance, I’ve always loved it,” Lucas Paquetá told L’Équipe. “My celebration is my trademark, I’ve always done that – it’s a funk step. I love funk.” The Brazilian sees himself as both a dancer and a warrior. It’s an apt description of a player who’s both bewitched and riled the opposition during his two years in Ligue 1. “I was trained at Flamengo, where you have to show great desire on the pitch,” the 24-year-old midfielder continued. “I’ve always been someone who liked to win all the time. I’ve always had that warrior willpower inside me. It can’t be taught.”

Dubbed ‘Craqueta’ by Lyon fans, Paquetá’s dogged, slippery, all-action style has made him the team’s creator-in-chief, low-key enforcer and passionate heartbeat under both Peter Bosz and Rudi Garcia. Such was the Brazilian’s 20/21 form for Garcia, over long periods he was the front runner to be named player of the season in France before Lille eventually won the Ligue 1 title.

The Brazilian has been used across the OL attack and his ability to adapt has proven key. Seen nominally as a number ten, where the majority of his longer-term future likely lies, at Lyon or elsewhere, some of the Brazilian’s best football came deeper in central midfield during the 20/21 campaign where his precise passing, underrated physicality and tight control made him difficult to dispossess and allowed him to orchestrate play.

Surprisingly broad, Paquetá adjusted well to a false-nine role too, where he played a handful of games last season amid an injury crisis. Despite protesting to Bosz, who agreed to change tact, and minimal goal contributions in that spell, the Brazilian held up play aggressively and proved a useful focal point, working hard to link with midfield runners such as Houssem Aouar, who enjoyed the extra freedom created by Paquetá.

That tenacity is underlined by the fact that the midfielder conceded the second most fouls in Ligue 1 last season, as Bosz’s side attempted to press high, leading to the OL man to make France’s third-most pressures while winning the sixth most tackles too. When asked about his best position by L’Équipe last year, Paquetá explained: “The best position is on the field… I feel good in all positions in the middle of the pitch.”

There’s something classical about Paquetá’s upright, shoulders-back, angular style, which gives him the appearance of a midfielder from the now distant past. Although blessed with velvety skill, it’s unusual to see him lower his centre of gravity and drop a shoulder to skip past defenders like Brazil teammate Neymar – who enjoys a strong understanding with Paquetá at international level. However, the wily midfielder was still the sixth most fouled player in Ligue 1 last season and made the top eight for number of players dribbled past too. Instead, he prefers to outmanoeuvre and turn away from his opponents using his slight of foot, given his relatively average pace. Comparisons with Kaka are well-earned.

As Lyon’s attacking and creative focal point, best illustrated during the 20/21 campaign when a freewheeling Lyon led by the Brazilian somehow failed to challenge for the title under Garcia, Paquetá breeds danger in a variety of ways. A genuine goal threat, having scored 18 Ligue 1 goals in 65 matches and managed the sixth-most shots in France last season, his finishing is calm and precise. Although not a speedy dribbler, Paquetá regularly embarrasses opponents with his graceful, classically Brazilian, trickery – he was even ludicrously booked for flicking the ball over a Troyes defender’s head last season.

A tally of just 13 assists in 78 OL games in all competitions underwhelms, but his astute use of the ball and deft passing is often best used a little deeper to provide the pass before the assist or by starting moves from a withdrawn position – Paquetá placed ninth for through balls across Europe’s top five leagues last season according to FBRef. There’s an intensity to his play that drags his team forward, it can feel like the Brazilian wants to win possession in midfield, pick a defence-splitting pass and rifle home the finish all by himself. Sometimes, over the course of a game, he does just that. “The Paquetá style is a mixture of fighting to recover the ball and playing with joy,” he told L’Équipe.

However, the 24-year-old’s attitude has been questioned after complaining to Bosz over being moved around the team and wrestling the ball away from designated penalty taker Houssem Aouar when 4-0 down at Rennes last November. As a child, the player’s mother often said he needed to show more grace when losing. Nevertheless, Paquetá’s hunger to apply himself is undoubted, often insisting on playing for OL immediately after an international break regardless of a tiring overnight flight from South America and having little to no training following an early morning qualifier (European time) with Brazil just a day or two before.

Unfortunately for fans and teammates, it’s likely Paquetá has played his last OL game. Having missed out on European football for next season, both club and player are keen to move on. Paquetá rejected the chance to extend his contract in December and has since asked to be sold with club president Jean-Michel Aulas confirming the club have already received offers this summer. Canal+ reported a €60m bid, made by an unnamed top five Premier League side, was rejected in January. Newcastle are long-term admirers and have been trying to convince Paquetá to join his good friend, and former OL teammate, Bruno Guimarães, at St. James’s Park since the winter after he rejected their advances. With his countryman Leonardo sporting director, PSG were also eyeing a move this summer, but Luis Campos’ arrival as Paris’ ideological spearhead has cooled any interest. Arsenal, Manchester City and Tottenham have also considered moves in recent weeks but it’s West Ham who are now front runners to sign the Brazilian before September.

Having failed to develop as hoped at AC Milan, both the warrior and the dancer have resurfaced at Lyon and, as Paquetá admits, the sideways move to France was a necessary step in his career. “At Milan, I put a lot of pressure on myself, too much,” he explained. “So, when I arrived here in Lyon, I told myself that I wouldn’t put up with it any more.” After a much-hyped €40m move to Italy from Flamengo in January 2019 as a 21-year-old, it became clear Paquetá wasn’t ready for such change. Three years of funk step later, Paquetá’s time has finally arrived.