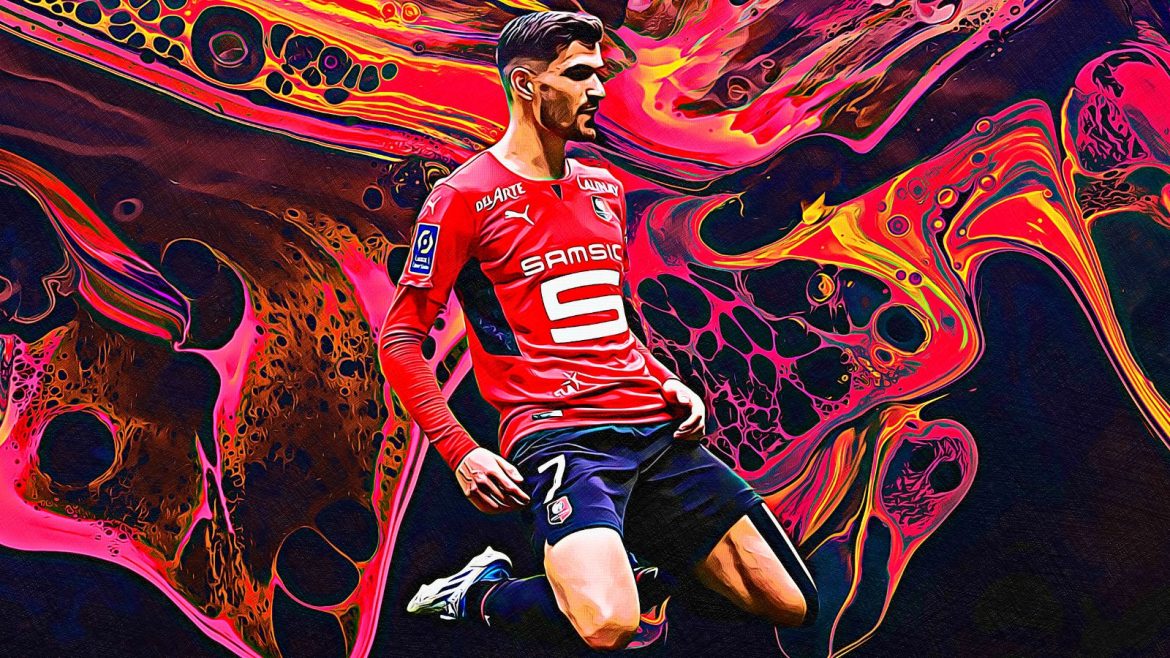 Few players in European football have improved as much as Rennes’ 25-year-old versatile forward Martin Terrier in recent seasons. Terrier has been a well-known name in Ligue 1 for a while now, representing four top-flight sides to date, but his move to Rennes had brought a major uptick in his output. Just three goal contributions were provided in 23 games for Lyon during the 19/20 season but his last 50 Ligue 1 outings for SRFC have seen 36 goals and assists. The exponential upward curve could soon take Terrier well beyond Ligue 1.

After breaking through at Lille and finding his feet with Strasbourg, the forward found his first opportunity at the top level with Lyon. Often used as a wide forward, the 25-year-old was never able to find the form that many believed he was capable of. Terrier did show some signs of promise at OL towards the end of the 2018/19 season, as he managed to net six goals in seven games, becoming a pivotal part of the attacking line as an inside forward arriving late from the left or bursting in behind with inverted runs. The following year, however, he wasn’t able to replicate the same form, scoring just one league goal.

After three seasons at OL and a loan move to former club Strasbourg, many believed the former France under 21 international had missed his chance in the upper echelons of European football. However, Rennes still believed that the promising talent, that excited many in his youth, could still be nurtured. Two seasons and £10.8m later, sporting director Florian Maurice signed Terrier for Rennes. Reunited with former manager Bruno Genesio, Terrier ascended to a whole new level.

In the 2021/22 season, the focus has been stolen by Kylian Mbappé and Moussa Dembélé’s goal-scoring exploits, with Terrier’s performances and impact going under the radar but, as his role transformed from being a threat in the final third to the penalty area, Terrier quietly became one of Ligue 1’s most prolific goal scorers. His 21 goals in 37 league appearances last season was six more than the last two seasons combined in all competitions while his first 18 games this season produced another 15 goals and assists. The improvement in his underlying numbers shows why there’s been such an upshift.

In taking 2.75 shots per 90 minutes last season, Terrier averaged a whole shot more a game than the previous campaign – showing the progression of his role in the attacking phase. There was also a noticeable improvement in the forward’s accuracy with a further 13% of his shots finding the target, up to 50.3% overall. This is despite fewer touches in the opposition box, showing growth in efficiency as he matures. His accuracy of finishing was among the best in Europe. With an expected goals of 13.6 and an overall tally of 21 goals, Terrier outperformed his xG by 7.4.

At Lyon, Terrier was often responsible for trying to split opponents with progressive passes and carries, but without end product while assists have been less frequent. However, the forward has since shown an improvement in his decision-making with greater involvement in overall build-up play and transitions at Rennes. He managed a career-best five assists across all competitions last season.

Foraying runs and ball-carrying have always been key attributes for complete forwards, whether featuring through the middle or in the wide areas. Terrier has always tended to drift into areas of restricted space, stopping attacks from flourishing, but, in the last two seasons, this part of his game has evolved. Last season, Terrier proved to be a key ball carrier last season, often launching Rennes into promising counters, his 5.4 progressive carries per 90 improved from 1.88 the previous season. An increase of 0.3 shot-creating actions per 90 is also testament to this. These aren’t massive numbers but show a continuous improvement of his effect in the final third with goals now his primary objective.

Terrier has proven throughout his career that he’s able to operate in various roles. Naturally a wide forward, the former Lille man has featured across the front line at Rennes to brilliant effect. Stylistically, Terrier suits a counter-attacking system. Running in behind high lines and breaking the offside trap comes easily to the Frenchman as he’s blessed with considerable pace. This could make him a good addition to a Premier League team looking to break into the top six and challenge for Europe – Leicester City come to mind with their ability to break at speed.

Tottenham have also been interested in the 25-year-old and, Terrier’s versatility could be a great option for Antonio Conte while Liverpool have also been linked. The Bundesliga’s high tempo would also suit his style where RB Leipzig are known for taking forwards to the next level. However, unless one of the top three clubs were to take a punt on the Frenchman, he may view a switch to Germany as a sideways step. Whether he stays or goes, Terrier has proven he belongs in Europe’s upper echelons and that his name could soon become a well-known one well beyond Ligue 1. This current rate of development will only see him continue to rise.

Kylian Mbappé would like to try striker partnership with Hugo Ekitike

Presnel Kimpembe injured again in blow for France and PSG