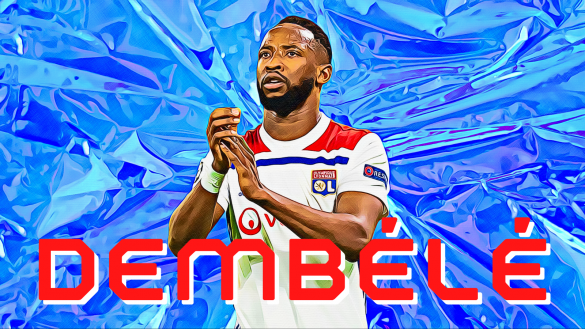 Ibrox, March 11th, 2018. From just inside his own half, Celtic midfielder Scott Brown launches a speculative ball towards his centre forward. Despite the relative lack of danger, panic ensues in the Rangers defence. I’ll let Hugh Burns of Rangers TV take over the commentary from this point: “WHAT’S THE GOALIE DOIN’ TOM? WHAT’S THE GOALIE DOIN’? Dembélé gets Celtic back on level terms…”

After some slapstick defending from the Rangers rear-guard, Moussa Dembélé, then wearing the green and white of Celtic, poked a lobbed finish over the onrushing Wes Foderingham. The Frenchman has made a career of scoring this sort of goal, and revels in ruffling the feathers of opposition players and supporters.

Such was his knack for doing this, not to mention his all-round impressive form for Celtic, that Lyon prized him away from Glasgow in the summer of 2018. The €22m transfer represented a record sale for a Scottish club at that time, surpassing the €15m Southampton paid Celtic for Virgil Van Dijk in 2015. That fee, payable over five years, required some creative engineering from both parties as the then Celtic manager Brendan Rodgers was reluctant to sell his main striker without a ready-made replacement so close to the transfer deadline.

Fearing the move may not materialise, Dembélé took to twitter to fire some cryptic shots at his manager. “A man without his word is nothing. A real man keeps his word.” The jab at Rodgers was telling, and spoke to the determination Dembélé had to return to his native France. Twenty goals in his debut season at Lyon, and 24 during the following year, justified the price tag and led to interest in the forward back on the British Isles prior to the COVID-19 pandemic.

Frank Lampard, then manager of Chelsea, had been monitoring the striker since his days in Scotland and even touted Oliver Giroud as a makeweight in any potential move. However, the transfer failed to materialise and, with Lampard being replaced as by Thomas Tuchel shortly afterwards, Chelsea dropped their interest in Dembélé. The striker failed to replicate this form following the return from the COVID-19 lockdown and, following a slow start to the 20/21 Ligue 1 season where he only registered a single goal, he was loaned out to Atlético Madrid as a replacement for the departing Diego Costa. His time at the Wanda Metropolitano will largely be remembered for a worrying collapse during a training session due to a drop in blood pressure. He played only 95 minutes during his brief spell at the club.

Following the instalment of Peter Bosz as Lyon manager at the beginning of the 21/22 season, Dembélé returned to favour for Les Gones. An impressive return of 22 goals has resuscitated his reputation as a proficient scorer in one of Europe’s top five divisions. Still only 25, the striker of Malian descent has plenty to offer a Champions League level club and with Lyon failing to secure European football for next season, they may decide to cash in now as he enters the final year of his contract. A potential move to the Premier League has been mooted but there will be no shortage of offers for Dembélé as he enters the prime of his career.

An astute provocateur on and off the pitch Dembélé has lately been seen winking in jest at a West Ham sending off and further endearing himself to the Celtic faithful by goading Rangers fans following their recent Europa League final defeat. Off field antics aside, Dembélé has displayed enough scoring nous at this stage of his career to warrant respect. Still only 25, the best is surely yet to come from the former Hoops striker.