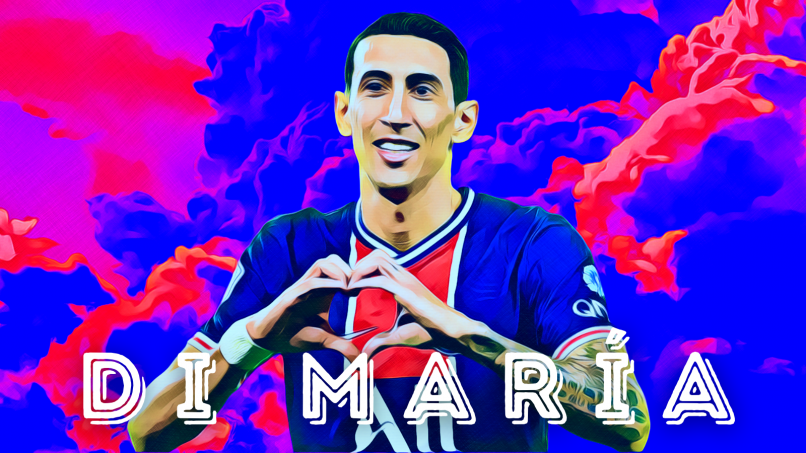 This time last year, Ángel Di María sat in fourth place in the Get French Football News 100, which concluded that he would ‘continue into his thirties as one of the game’s greatest unsung heroes’. If this was true before the arrival of his compatriot Lionel Messi in the City of Lights, it is even more so now.

Di María’s entire career has been marked by superstar teammates, both for his club and his country: Cristiano Ronaldo and Gareth Bale at Real Madrid, Kylian Mbappé and Neymar at PSG and Messi and Sergio Agüero with Argentina. You could argue that it’s a privilege to play with such talented players, as Di María said himself: “I have already played with Cristiano Ronaldo, Neymar, Mbappé,” but, “if I could play with Leo as well… I could happily retire after that.”

But, as it became clear in the early weeks of the 2021/22 season, the arrival of Lionel Messi only added more competition for places that are already scarce in the PSG starting eleven. And Di María, being the third of the front three, was, on paper, the obvious choice to move aside for Messi. However, this has not necessarily always been the case. Although the 33-year-old sits some way down our list in comparison to last year, in light of his circumstances this season, this ought to be considered an achievement in itself.

If Argentina’s victorious Copa América campaign this summer was anything to go by, you’d have feared for Di María going into the 2021/22 Ligue 1 season. It’s safe to say the tournament was a stage for Lionel Messi, whose four goals and five assists dominated the South American winter. Comparatively, Di María had a very quiet tournament, only being involved in a single goal in his five appearances leading up to the final.

The final, however, was the exception. He stepped up when needed, scoring his only goal of the tournament to beat Brazil and take home Argentina’s first Copa América trophy since 1993. And what a goal it was: a perfectly executed lob over Ederson from just inside the box. The skill, composure and technique displayed in that single moment is exactly why Di María remains such a valuable asset for both Argentina and PSG.

More importantly, these attributes are displayed on a regular basis by the South American. For example, forty days after his Copa-winning lob, Di María pulled off an almost identical finish against Brest, while the whole world was watching, waiting for Messi’s first minutes in the side. Indeed, Messi’s relatively inconsistent game time has been one of the headlines of PSG’s 2021/22 Ligue 1 campaign. In the four months following his signing, he only accumulated a little more than 500 minutes of Ligue 1 football, missing seven games altogether. Unexpectedly, this has left the door ajar for Di María, who managed eleven league appearances before Christmas, nine of which were starts.

While he has not blown sides away this campaign, he has been consistently useful, particularly when his fellow forwards fail to turn up. In the league, Messi has so far amassed a single goal and three assists, while Neymar has managed three of each. Di María matched Neymar’s attacking output in the first half of the season with 48 fewer minutes of game time and has also outperformed his compatriot.

A perfect example of this crucial role within the squad is Paris Saint-Germain’s game against Lille at the end of October. Before the winter break, PSG gave themselves an 11-point lead after 17 games, largely through the salvaging of points in the face of defeat. At the Parc des Princes against Les Dogues, it was Di María who led the comeback. A dismal first half display and a knee knock led to the half-time substitution of Messi, replaced by Icardi. With Lille leading 1-0 at the start of the second half, PSG were able to turn up the pressure and Di María’s contributions proved crucial. In the 74th minute, he cleverly found Marquinhos with a chipped cross, and the centre back was able to tuck it away to equalise. Fifteen minutes later, he buried a powerful shot past Ivo Grbić from just inside the box. It has been moments like these where it’s been impossible to ignore the impact of the unsung hero.

Despite his important contributions in the league, Di María has struggled somewhat in the Champions League. The Argentine failed to register a single goal in 2021. For a player so woven into the DNA of the competition, having won it with Real Madrid and registered the most assists just two years ago, this is certainly a surprise. In fact, the last time Di María had competed in the Champions League and failed to register a group stage goal was the 2012/13 season. Perhaps this is partly a result of Messi and Mbappé’s dominance: between them, they amassed fifteen goal involvements in the six group games. Indeed, it certainly has something to do with his three game suspension following the red card he received at the Etihad in last year’s semi-final.

Nonetheless, Ángel Di María defied the odds in 2021. Playing under Messi for both club and country can’t be easy, no matter how much of a privilege it may seem. While he may have been drowned out of the Champions League so far, he has been vital in the maintenance of PSG’s league campaign, a domain in which Messi and Neymar have, as yet this season, failed to shine. Should he keep performing the way he has, there is indeed nothing stopping him from maintaining his status as PSG’s unsung hero for the next few years. And, most likely, Paris Saint-Germain will need him to be just that.