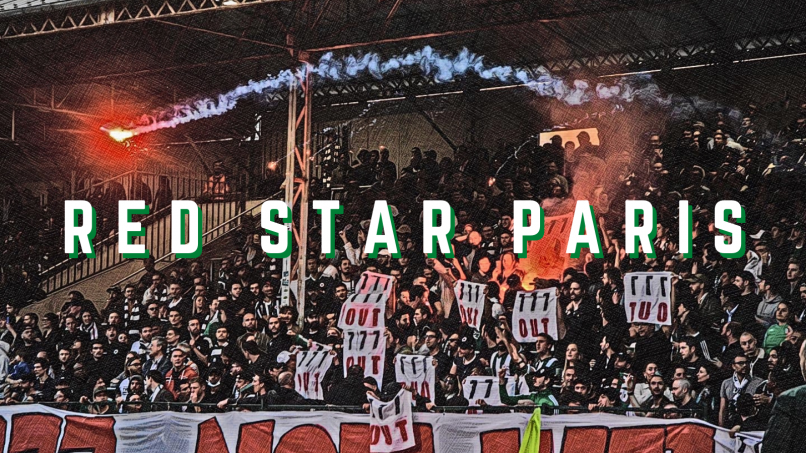 Red Star’s abandoned home game against FC Sète last week marks the start of a battle between prospective owners 777 Partners and fans that could make or break the future of the football club.

Whilst the mayor of Saint-Ouen, Karim Bouamrane, urged for “calm and collected talks” between all the parties involved, Red Star fans are determined that no concessions are made to 777 Partners. The club itself has already condemned the use of “pyrotechnic devices” in a statement that also criticised the behaviour of fans in the Rino Della Negra stand – where the most active and vocal sections of Red Star fans are housed – as “unprecedented and unacceptable”.

Red Star FC is a truly unique club in French football: its relationship with the social history of the Parisien suburbs and the fans’ political expression are distinct features of the supporter’s identity – which is under threat from a global multi-club business model. There is an understandable insecurity about protecting a historic club such as Red Star from the forces of capitalism, and the appropriation of its values into a kappa-marketing, shirt-selling machine. That the club’s values “are not for sale” is the ethos that is foundational to the Rino Della Negra stand, yet criticism of 777 partner’s proposition isn’t just limited to their breach of the fans’ principles.

There is undoubtedly profit-making potential in Red Star FC’s future academy, located in the “hotbed of talent” that the greater Parisien suburban area possesses. The meteoric rise of Kylian Mbappé and the French national team’s 2018 World Cup win has highlighted this potential within the Île-de-France region. 777 Partners can see this potential, and they’ve acted to monopolise on it. Red Star’s role in a multi-club model would be to serve as a feeder club that effectively trades talented youth players with Genoa, Sevilla, or Standard Liège without representing the club that has developed them since childhood.

What purpose does the development of Red Star’s training facilities have if the academy serves 4 other clubs? What use does Red Star’s social and youth programmes have if a young player cannot be allowed to authentically represent their local area at the highest level?

Patrice Haddad’s “business first, football second” approach has been counterproductive for Red Star on the pitch as they currently sit 11th in the Championnat National (D3), flirting with relegation for the majority of the season. 777 partners have already made it clear that their project aims to create a “sustainable financial profile which allows the business to have a glimpse of success” on a budget that “is determined by the league in which they find themselves”. The implication by CEO Josh Wander is that Red Star will find themselves bottom of the 777 hierarchy. This will be concerning news for any Red Star fan that wants the club to rediscover its historic place in French football.

777 Partners specialise in undervalued businesses that have “deep connections” to their fan bases, yet the firm’s €10 million investment has ironically already split open a rift between the club’s leadership and the most vocal sections of its support. The anger from the Rino Della Negra stand comes from a sense of betrayal, as fans were not consulted on the matter of 777’s exclusive negotiations with Patrice Haddad. It seems that the recent promise of openness and transparency from the club’s leadership made during the tense meetings over Stade Bauer’s renovation have been broken; and the most vocal critics of Haddad will not forget it.

Is there a possible path to success at Red Star FC?

A suitable investor for Red Star FC is indeed possible or perhaps even necessary for the club’s survival. The president of Collectif Red Star Bauer, Vincent Chutet-Mézance, accepts that “the club is on its last legs” and that there is a need for “new investors to avoid languishing in the third division” that must have “a genuine sporting proposal”. A legitimate investment into Red Star FC’s social and sporting project has to have the blessing of Red Star FC’s fanbase, and any potential new owner must have more than just a vague understanding of Red Star’s history and values. There is a path to success at Red Star FC – but it can’t come at the expense of the supporter’s identity, the youth of Seine-Saint-Denis, and the club’s own autonomy.

Currently, the club is in a form of stasis. It is caught between the grievances of Red Star fans and a determined 777 Partners who expect to conclude the €10 million transaction in the coming weeks and take total control of the club. In the meantime, Red Star will play at home against CS Sedan on the 29th April, still needing points to confirm their status in the third division for next season. Despite any events on the pitch, it is what is happening in the stands that could define the future of Red Star FC – for better or for worse.