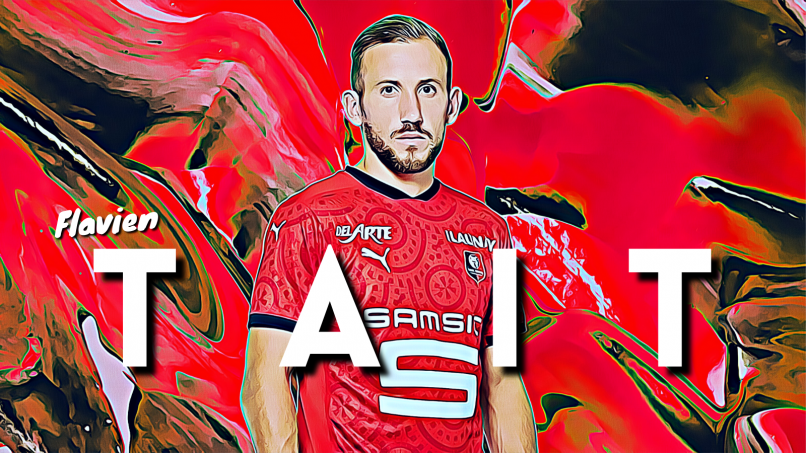 The summer of 2020 was a period of great upheaval in Stade Rennais’ midfield. With the departures of Eduardo Camavinga, Steven Nzonzi, and Clement Grenier, Les Rouges et Noir lost three important pieces in the spine of the team. Then without the three Frenchmen, there was significant pressure on Technical Director Florian Maurice to replace a midfield trio that had appeared in a combined 92 league matches the season prior. Leaning on the financial muscle of club owner François Pinault, Rennes brought in a talented midfield duo in Lovro Majer and Baptiste Santamaria. Despite the new arrivals, however, the midfielder that has best filled the void is one that was already at the club: Flavien Tait.

Tait signed from Angers in July 2019, appearing at the time to be a shrewd signing by then manager Julien Stéphan. The club shelled out €9m for the midfielder off the back of an impressive season for Les Angevins in which he netted five goals and provided seven assists playing as a number ten or, usually, on the left. Tait did not hit the ground running in Brittany, however, as he saw red in the first match of the 2019/20 season and was suspended for an additional three.

From his arrival to the end of 2020, Tait was used primarily by Stephan on the left-wing, a position he excelled in while at Angers. Different from the modern winger, Tait doesn’t possess blistering top speed, nor the flair and dribbling skills found in teammates Jérémy Doku and Kamaldeen Sulemana. Despite this, Tait is an excellent runner and ball carrier, two qualities that have shone in his transition into a freer, more central, deeper role over 2021.

If Tait struggled on the left flank under Stephan, then it’s under the tutelage of Bruno Genesio that the 28-year-old has truly excelled and rediscovered the best version of himself. Alongside fellow midfielder Jonas Martin, Flavien Tait has emerged as a key cog in Genesio’s 4-3-3 and 4-4-2 systems, seamlessly linking midfield and attack with his progressive play. Liberated by the solidity provided by a more disciplined holding midfielder, often Martin or Santamaria, Tait is allowed the freedom to patrol the left side of central midfield.

In an interview with France Bleu Armorique, Tait spoke to this repositioning and how it fits within Rennes’ midfield system. “What is good is that with ‘Jo’ (Jonas Martin), or with ‘Santa’ (Baptiste Santamaria), I play with profiles that are a little more defensive than me, so they allow me to get forward. I know that the balance behind is guaranteed. The coach also asks me to guide play, to dictate play, to try to be technically sound, to not lose possession too much. Even if failure is part of football, he always tells us to try again, try again, try again, and to take risks because it’s part of the game.”

While Tait is quick to credit Rennes’ system of play and his teammates’ ability within it, he’s equally heralded by these same teammates for his transformation under Genesio. Benjamin Bourigeaud, another key figure in Rennes senior team, praised “Flav” in an interview with Stade Rennais Online. “What he’s doing now is just the merit of his work. His beginnings here were very difficult. When he arrived, he was suspended, he had a hard time adapting, and people immediately criticised him. When he was subbed out, he was whistled. It was a really difficult period for him. Today, with a bit more confidence, he’s showing his talent and his qualities, and why he signed with us…When you see what he overcame, it’s not easy…He was able to stay strong, and today, he’s showing what he’s capable of.”

Alongside the recent praise, what has perhaps most vindicated Genesio and his confidence in Tait is the 28-year-old’s consistent ability to shine in Rennes’ biggest, most challenging matches. Tait’s industrious, all-action performances against PSG, Lyon, and Tottenham have propelled Rennes onto the podium of Ligue 1 while finishing top of their UEFA Conference League group. Of these, the most impressive display came against PSG in October, when the Frenchman played a major part in Les Rouges et Noirs’ 2-0 victory over a full-strength PSG side.

With just 34% possession, Rennes did not see much of the ball against the league leaders, but Tait’s directness meant that the home side made the most of their opportunities. During his 84 minutes played, Tait rarely lost possession, completing nine progressive carries and 92% of his passes, and put the hosts up 2-0 just after half-time. The goal, a clean half volley from the penalty spot, encapsulated some of Tait’s best qualities. Starting from the halfway line, the energetic midfielder followed play as Gaëtan Laborde broke down the right-wing. As he approached the box, Tait slowed his driving run to leave space between him and the goal. Laborde, often in Tait’s position in these attacks, was able to find Tait with a bouncing cross, which the 28-year-old directed cleanly past Donnarumma and into the far corner. Tait’s positional awareness, work rate, and vision all came into play in the goal that ensured Rennes two-goal upset.

Going forward, a busy fixture list and multiple first-team absences due to the African Cup of Nations await Rennes. If the Breton club is to navigate the next few months safely, Tait will undoubtedly be at the centre. For the 28-year-old, there have already been some injury concerns, as he missed four matches in December through a hip injury. If Tait can stay fit, however, then he will not just be challenging Lovro Majer and Jonas Martin for the title of best midfielder in Rennes, but also the likes of Téji Savanier and Séko Fofana for the title of best midfielder in France.