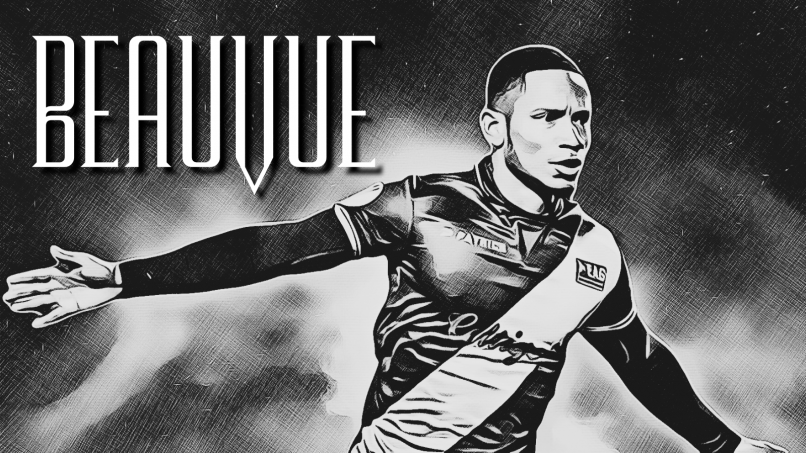 In this first episode of the brand new GFFN series, we will look at the one and only Claudio “Air” Beauvue.

Claudio Beauvue was a late bloomer. Born and raised on the Caribbean island of Guadeloupe, he spent the first half of his career in the French lower divisions with Troyes and Châteauroux. His career could have gone unnoticed but it took an unexpected turn in the summer of 2013. After a short spell at Bastia between February and May, he made a move to recently-promoted Guingamp that would change his career forever. At the time, the pocket forward was already 25-years-old, only had a six-months experience in Ligue 1 and had never scored more than three goals in an entire season.

During the following 2013/14 campaign, Guingamp managed two impressive feats: staying in Ligue 1 and winning the Coupe de France, beating local rivals Rennes 2-0 in the final with Beauvue showing glimpses of his talent. The Coupe de France title meant Europa League football in 2014/15. The future looked bright but the small club had to deal with several departures, forcing then-coach Jocelyn Gourvenec (now at Lille) to reshape his front line and play Claudio Beauvue as a striker alongside Christophe Mandanne in an old-school 4-4-2. A new position for Beauvue, who had spent most of his career on the wings.

This change of position completely transformed the player who would end up scoring 27 goals in all competitions, including 17 in Ligue 1 and four in the Coupe de France. Five goals came in the Europa League too, a competition in which the Roudourou side were underdogs but miraculously made it out of the group stages, partly thanks to a Beauvue brace against PAOK. That goal haul made him the 11th top European scorer for the 2014/15 season, above the likes of Arsenal’s Alexis Sanchez, Inter’s Mauro Icardi and Bayern’s Robert Lewandowski as well as the second best Frenchman, behind Lyon’s Alexandre Lacazette.

But what Beauvue will be best remembered for is his improbable ability in the air that earned him the nickname of ‘Air Beauvue’. People knew him to be an explosive player, quick with a good right foot, but nobody expected him to become such a dangerous player with his head. His 5’7 frame didn’t prevent him from jumping higher than most of his opponents. In fact, Beauvue compensated for his lack of height with a sense of timing that allowed him to place perfect headers from almost any position. One of his trademark moves was to run from deep on a set-piece and use his spring to powerfully head the ball home.

The paradox with Beauvue is that he was sometimes reduced to his heading ability despite having numerous other qualities. That was probably due to the fact that, out of his 17 league goals that season, six were headers (a record in the league) and that this type of strike was always easy to remember. Beauvue was also a real threat on the counter, using his pace to perforate defences and unleash powerful shots from almost every angle possible. The Guadeloupe man scored several eye-catching goals with his feet, including a wonder strike against PAOK after beating two defenders, a marvellous last-gasp free-kick against Concarneau in the Coupe de France and a Cristiano Ronaldo-esque slalom against Reims.

To reduce Claudio Beauvue’s career to this 2014/15 season alone would be unfair, but not unsurprising. After his exploits at Guingamp, he was offered a shot with Lyon in 2015/16 but never managed to replicate his previous performances. Looking back now, the OL move was the beginning of the end for Beauvue who was slowly forgotten. After several spells for struggling Spanish sides such as Celta Vigo, Leganes and second-tier Deportivo La Coruna, he came back to France with Ligue 2 side Caen. Today, aged 33, he plays for struggling third division side Boulogne. Nevertheless, no one who watched Ligue 1 during the 2014/15 season will forget Claudio “Air” Beauvue.