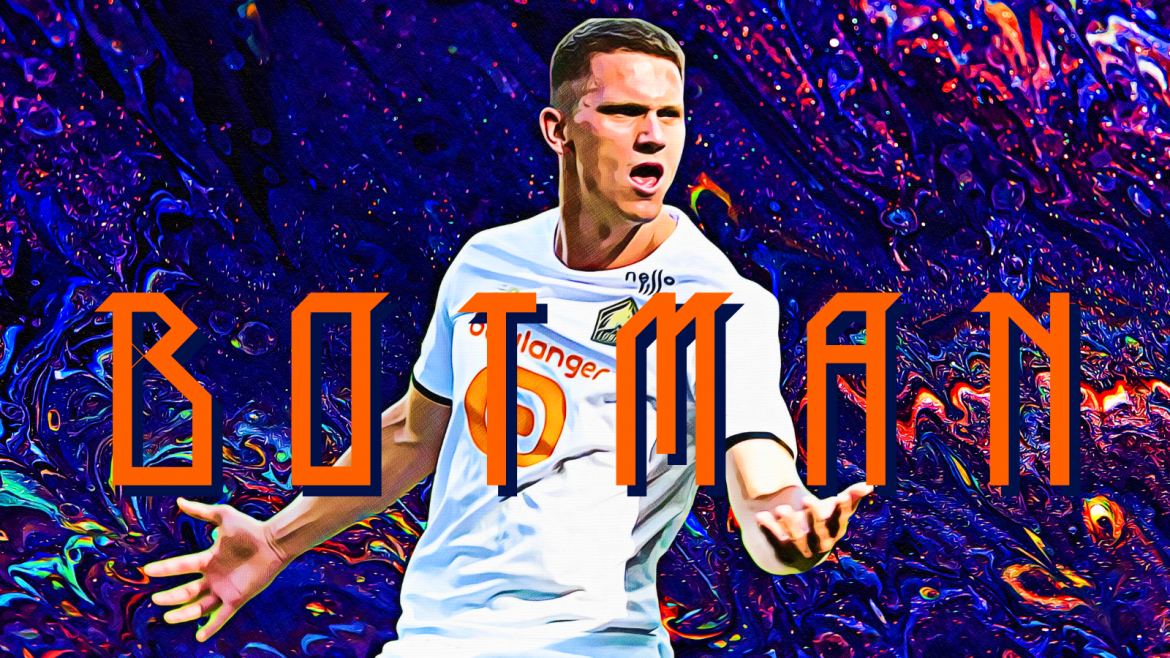 Over the last three seasons, few players across Europe have improved like Sven Botman. The 22-year-old Dutch centre-back joined an ambitious Newcastle United project this week from Lille for £35m. The Magpies are Botman’s fourth club in just over three years, a period in which he’s repeatedly made great leaps forward as a player but success in the Premier League will require Botman’s greatest jump yet.

After a season interrupted by injuries, statistically, Lille’s Ligue 1 title-winning season of 2020/21 is more representative of Botman’s place among France’s elite. The Dutchman made Ligue 1’s top ten for clearances that year, an impressive feat for a top-end side, and was seventh for aerials won, both in terms of raw numbers and in percentage success, underlining his imposing physicality, heading ability and increasingly adept positioning. This was especially evident when Lille defended deep with Botman at his best when his team are under pressure.

According to FBRef, the 20/21 season saw Botman finish eighth in France for progressive passes, sixth for passes into the final third and third for overall touches. As a left-footed centre-back, opening up a variety of unusual passing lanes, his ability to start moves and pick an incisive pass is low-key but increasingly efficient. Although Premier League football will test that area of his game, as he’s little more than proficient technically in relative terms and he could be forced into errors by an aggressive press, Botman’s passing is useful when given time to execute, as those numbers underline.

The more confident and well-rounded Botman of today took a while to emerge, however. Before Christmas 2020 especially, Botman was occasionally, but noticeably, wayward and uncertain in his defending. Veteran centre-back partner José Fonte was crucial in expertly coaching Botman through games, nurturing his talent. Without the Portuguese, things might have been different. Although Botman admittedly had just one season (shortened by Covid) at senior level to his name before joining Lille, with Heerenveen in Holland, former West Ham and Southampton man Fonte, now 38, was the far more assured, bullish and reliable of the pair.

Despite missing 14 games injured, 2022, however, marked an evolution for Botman as Lille floundered without title-winning coach Christophe Galtier’s charisma, strategic nous and rigour under his replacement, Jocelyn Gourvennec. Botman was one of the few players, alongside striker Jonathan David and midfielder Renato Sanches, to continue to his upward curve. Although Fonte eventually grew into the season, Botman quickly became his equal as a mature and imposing defensive leader, despite the 16-year gap in experience. While it should be noted that, per 90 minutes, the 22-year-old also improved on all major defensive metrics this season, that’s at least partly due his increased workload as Lille struggled in midtable in defence of their title.

Overall, Botman’s rise has been steep. In just 26 Dutch league games, he jumped from Ajax’s youth team to an €8m transfer to Lille before now joining Newcastle two seasons on for nearly five times that amount. In that time he progressed from centre-back apprentice to defensive leader via a title win and adapting neatly to Champions League football. However, at 22, he’s still relatively inexperienced after 109 senior games. Fellow Ajax academy graduate and centre-back Matthijs de Ligt, now of Juventus and also 22, has made 272 senior outings, for example. As a result, Botman will need to make another leap forward in England.

Both Galtier and Gourvennec deployed relatively pragmatic approaches which suited Botman – Fonte defined Lille’s DNA as “not conceding goals” – but Eddie Howe’s more possession-focused and expansive style could expose the Dutch defender’s average pace and agility. At the very least, Botman will need a quicker, proactive covering partner, another mentor to guide him as Fonte did. Transitioning from the relatively stoic Ligue 1 to the more entropic Premier League will stringently test Botman’s composure in possession and defensive focus.

Botman will be aware of this, having faced similar issues with Heerenveen in 2019, after joining from Ajax’s youth team, where errors were made before he settled. “The pace was faster, so my speed of action had to go up. People might have thought: ‘I don’t know if he can handle it’ – but it went well,” the player recalled. Having joined Lille, Botman met similar challenges, this time highlighting Fonte’s guidance in his success: “José is very important to me, he has a lot of experience and coaches me a lot. I need it, even more now, in a new more physical and more tactical league. I like having this support, and I thank him for it.”

Having deftly headed the opener, Botman’s standout display this season came in drawing at Marseille. Botman was imperious as Lille defended for an hour with ten men, proving typically unbeatable in the air while making several key interventions when facing his own goal with his team suffering long periods of suffocating pressure. However, that type of game played to the Dutchman’s strengths. Although Newcastle will also be under siege at times, especially early on in this new cycle, the club’s new investors have far more ambitious aims for the team which will require Botman to improve technically in the longer term.

Despite the €37m fee, a mature season in France and obvious progression, his quality and potential notwithstanding, Botman’s talent remains a developing one. Although speaking back in 2020, former Ajax teammate Kaj Sierhuis’ assessment remains apt as Botman heads to England. “He was never considered a special talent,” Sierhuis explained. “He doesn’t fit the prototype of an Ajax defender… he’s big and a very good defender, but he needed to learn to not be afraid, to play, to dribble”. That process will need to continue at Newcastle.

During the title run-in last season, Botman himself conceded to The Athletic that: “I have to improve my speed on the ball, my movement with the ball… knowing what I’m going to do before I get the ball, thinking two steps ahead… I’m tall but, if you want to perform at a level like this, you need to be fast. Especially in big competitions, where there are a lot of good attackers who are really quick in the first 10 to 20 metres. I can improve on this.” Improve Botman has, but lapses remain.

Botman has had to adapt to new circumstances in all three of his senior seasons, but joining Newcastle is his biggest challenge yet. Despite this astute firefighting style of defending, commanding physicality and relentless improvement overall, success is far from guaranteed, and it will likely take the right partner, an understanding coach and more than a little time for Botman to make his greatest leap yet.