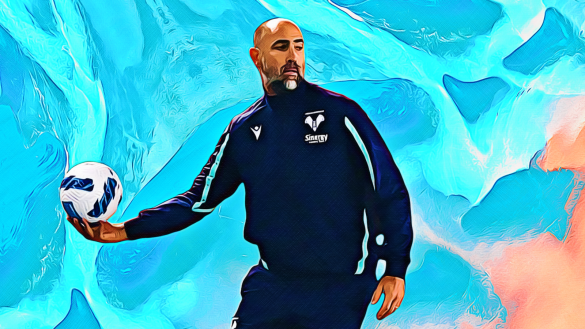 In his seminal history of football tactics, Inverting The Pyramid, Jonathan Wilson discusses the practice of kicking about a round-shaped object that gave birth to football. Over the years, the game has witnessed the rise of different aspects – coaching principles, players’ adaptability and fan demands. Football is seen differently nowadays, with fans, who often aren’t interested by success with a pragmatic approach, continuously yearning for the injection of aestheticism. The appointment of Igor Tudor at Marseille aspires to bridge the gap between the pressure to delivering results and the fans demand for pleasing football.

“Every coach is different,” Tudor explained during his OM presentation. “I want courageous and intensive football, not only uniquely based on the defence. I want people who come to the stadium to be entertained and not disappointed. It’s inevitable that there’s a part of Italy in me, because I worked there for long time. You have to pick players that are adapted to the game with passion and desire – I’m sure we will get to that point.”

Although centre-back by trade, Tudor’s philosophy was influenced by his younger days. After moving to Juventus from Hajduk Split in 1998, Tudor stated: “I come from the Hajduk school, where specific teaching is very important. It’s an aspect that’s considered a lot in Croatia, while, in Italy, the focus is more on strength and tactics.” Back then, one could envisage he would be become a coach.

At just 30, Tudor retired due to injuries having won two Serie A titles after being crowned Croatia’s 2001 player of the year, the first defender to win the award in 17 years. His coaching journey began at Hajduk Split, winning the Croatian Cup in the 2012/13 season before joining Greek club PAOK then Turkish sides Karabükspor and Galatasaray, but he never stayed more than a season before two stints with Udinese ended in misery.

The promise of a young coach, only seven years older than Cristiano Ronaldo, had begun to fade away. Following his second spell with Split, Tudor became new coach Andrea Pirlo’s assistant at Juventus in the summer of 2020. Juventus won the Coppa Italia that season but Italian reports claimed Tudor bore little credit as Pirlo would hardly listen to his pitch side suggestions.

Pirlo, and Tudor, were soon removed by Juve but, having sacked Eusebio Di Francesco after just three games last season, Tudor was soon appointed as coach of Hellas Verona. Given his patchy record, the Croatian was expected to struggle with the club’s severe situation but Tudor quickly turned Verona’s fortunes around, losing just one game his first ten league fixtures.

With Tudor at the helm, an attacking Gialloblu team ended the season with more points than in the previous campaign under Ivan Juric while forwards Giovanni Simeone, Antonin Barak and Gianluca Caprari all reached double figures in Serie A. Simeone racked up 17 goals from 35 appearances, Barak, on the right, and Caprari, on the left, netted 12 and 11 respectively. Collectively, Verona ended up scoring 65 in 38 matches, just five fewer than Scudetto winners, Milan.

Defensively, however, Tudor’s side lacked robustness, conceding 59, one less than relegated Genoa, but his playing style, often dominated by well-orchestrated counter-pressing, made Verona a neutral’s favourite. However, despite some memorable moments, Tudor left Hellas earlier this summer amid disagreements with the club hierarchy.

At Verona, Tudor stuck with Di Francesco’s 3-4-2-1 formation and that three-man defence should re-appear at Marseille. Replacing William Saliba, who returned to Arsenal after a loan spell, could prove key given his importance on the right side of Sampaoli’s asymmetrical system which jumped between a three man and four man defence. Under the Croat, both full-backs will have an important role in the team’s defence, attack, and press too. Tudor’s pressing philosophy replicates Antonio Conte’s, closing down the opponent in a blink of an eye, aggressively trying to take possession. The method appears hasty but it’s been successful.

The 44-year-old Tudor deserved this step up after his success at a cash-strapped Verona. A full pre-season to impose his tactical ideas on the squad will be crucial, after that, only time will tell whether this move to Marseille turns out to be a blessing or a curse the Croatian coach should have avoided.