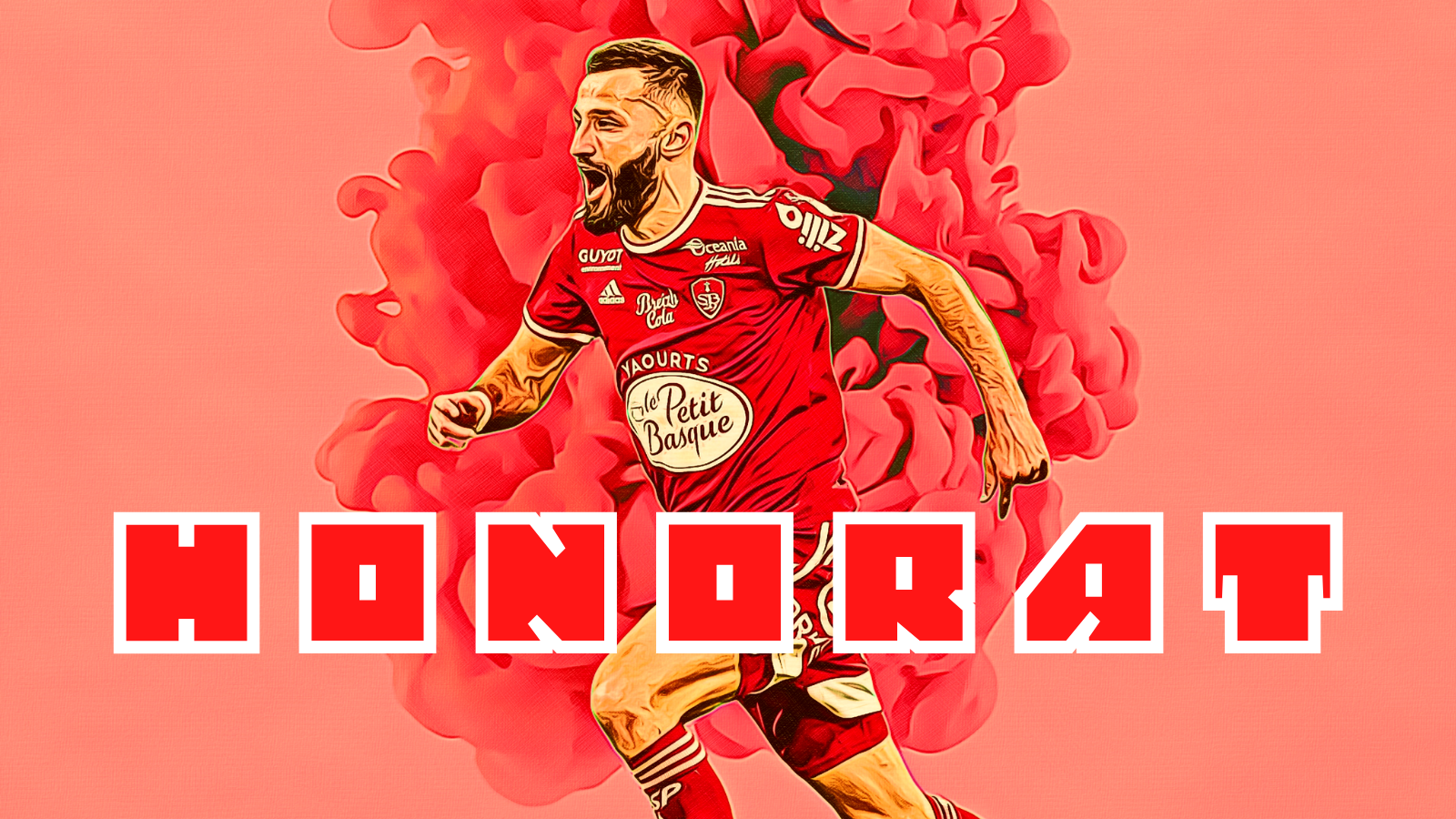 Brest don’t often get any recognition, other than via an innuendo or two. Now, however, there’s a little more buzz around the club thanks to midfielder Romain Faivre and his incredible potential. For teams like Brest, not widely watched by neutrals, players other than their biggest star fade into the background, regardless of their performances. That player casts a shadow over others. For Franck Honorat, this has been his reality for some time.

If you were to list Ligue 1’s most underrated players, Honorat would be near the top. For all the quality that the inimitable Faivre brings to the side, it’s Honorat who has been Brest’s X-factor. Calling him the perfect side-kick would do his talents a great disservice, as he carries too much of a threat on his own. He’s a menace operating down the wings with his ability to smartly receive the ball and get it into the more dangerous areas with his explosiveness.

When he isn’t progressing the ball into the final third, he’s getting it into the penalty area and causing chaos. Eight goals last season in Ligue 1 – one behind top scorer Steve Mounie – shows his eye for goal. In fact, he better his xG by a tally of 4.4, the third-highest difference in Ligue 1, according to FBRef. Considering the fact that fellow forwards Irvin Cardona, Romain Faivre and Gaëtan Charbonnier were all within 1.0 of their xG, it’s easy to see his importance for them.

For long, those who have watched Honorat consistently – specifically in Ligue 2 – have been aware of his potential. There was always the question of whether he could reproduce his Clermont from for a Ligue 1 side and a short spell at Saint-Étienne didn’t assuage those doubts. It is at Brest, however, that he has truly come into his own. His debut season gave him much needed continuity, with 36 league appearances in total, 28 of which were starts.

His eight goals, four assists didn’t quite capture his excellence all season long, with those assist numbers failing to reflect his creative work for a side that finished 17th. There was still ample evidence of his importance, however, with 14 big chances created, making him the joint 5th best final ball creator in the league. Only Memphis Depay, Ángel Di María, Florian Thauvin and Farid Boulaya created more. Perhaps if his teammates could finish more effectively, he would have had double figures in assists and gotten the recognition he deserved.

This season, Honorat has picked up from where he left off. His brilliant start has been one of the reasons why Brest became the form team in the division recently after six straight wins before the winter break. The most impressive performance of that run came against Marseille at the Vélodrome where Honorat scored the winner – a thumping effort after neat interplay with Jérémy Le Douaron and a smooth run down the middle. The goal showed all that Honorat is about: the explosiveness, his smart movement, his accurate shooting and his ability to combine smartly with teammates.

The most striking thing about Honorat is his strong technical ability, which is backed up by his deceptively good close control. Despite not being a volume dribbler or one that completes many dribbles, he’s still able to do a lot of ball-carrying thanks to his skill set. If he were a number nine, he would be halfway in the Karim Benzema mould – it shows when he goes on one of his runs. He obviously doesn’t have the supreme quality of the Real Madrid man but there are similarities in how he carries the ball and draws opposition players to him.

Whenever Faivre does leave Brest, Honorat would be expected to shoulder a lot more responsibility. On this evidence, there’s no doubt he’s a capable replacement. Brest look likely to remain in the division once more and may not even have to deal with any relegation struggle under the guidance of Michel Der Zakarian. In Honorat, they have a player who guarantees an offensive threat and who continues to be the X-factor that all mid-to-lower table teams need.

2021 has been the year in which Franck Honorat really came into his own. The potential he carried finally started to show at the level required. There’s a lot more to come from him in 2022, and it’s looking increasingly likely that he will start to command a lot more attention beyond France. More eyes will be on him as the season progresses. At 25, it’s the right time to take a look.