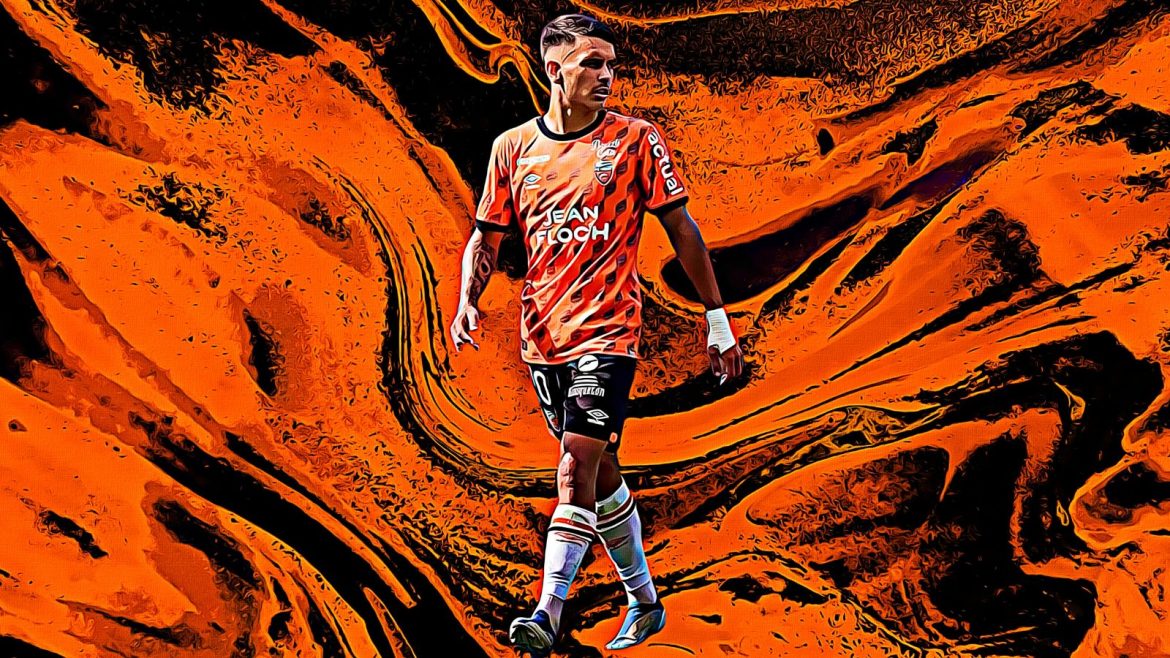 “He’s a player I love, Enzo is the heart of our team,” explained Lorient captain Laurent Abergel in September. With FCL keeping PSG honest at the top of Ligue 1, such praise was natural as graceful 22-year-old creator Enzo Le Fée led Les Merlus’ charge but it shows how much has changed for Le Fée. In just a few months, the Frenchman has gone from a talented but ineffectual number ten to dominating one of Europe’s form sides. His rise, however, has only just begun.

Despite his youth, there had been growing suspicions since Lorient’s return to Ligue 1 in 2020, that Le Fée might fail to reach his lofty potential. During FCL’s three years in Ligue 2, Le Fée established himself as one of France’s most exciting prospects but 18 months in Ligue 1 failed to bring notable development. Although his technical ability and vision fleetingly impressed, Le Fée was unable to truly affect games consistently and often proved lightweight in a physical division. A miserly 36 points saw Christophe Pélissier’s team crawl to safety last season following a run of 15 winless games. The margin of two points was just enough the year before.

Pélissier deployed Le Fée as a number ten, a deeper central playmaker and out wide, all to minimal success and the youngster lost his starting spot in February, coming off the bench for five successive games. Although far from sure to start the year before too, as Lorient badly struggling, there was a sense Pélissier might be giving up on his most talented player. However, that period seemed to motivate Le Fée. His return for the run-in coincided with Lorient’s season-saving uptick in form. Le Fée’s first game back brought a 2-0 win at Clermont before orchestrating a pivotal 6-2 mauling of fellow relegation candidates Saint-Étienne. The reverse score line would have seen the clubs swap places in the final table and Lorient enter the relegation play-offs.

Previously, Le Fée was often ponderous and meek but his intensity noticeably amped up on his return, forcefully imposing himself on games, rather than being swept away by what is an increasingly open and pacey division. There was new steel to Le Fée’s demeanour, as if he’d suspected Pélissier’s wavering faith and resolved to prove his coach wrong. That newfound aggressiveness and proactive style allowed Le Fée to apply his considerable talent more effectively. By May, Lorient’s number ten was fast becoming the dominating creator his talent dictated. However, with dynamic new coach Régis Le Bris installed, this season has seen the young midfielder’s development take another leap.

Despite few major signings, Le Bris’ Lorient have become one of Ligue 1’s most exciting, fluid and attacking teams. A run of just one loss in their first 12 games this season, including six consecutive wins, meant FCL kept pace with PSG and, despite three games without a win afterward, they continue to show Europe is a realistic aim. Both sides of Le Fée’s game have improved under Le Bris. Often used deeper in midfield, that newfound intensity has been channelled into effective pressing and defensive work. By November, the Frenchman had made the second-most tackles in Ligue 1 having led the division for number of pressures up to October, an impressive switch for a player (whose name aptly translates to English as ‘The Fairy’) long pigeon-holed as a lithe but lightweight number ten.

However, the 22-year-old remains Le Bris’ creator-in-chief, making the fifth most key passes in Europe’s top five leagues by the start of November as well as the continent’s sixth most shot-creating actions. For comparison, Le Fée’s game now resembles that of Newcastle United midfielder Bruno Guimarães in that his intensity, mobility and vision allow him to both take control of midfield battles while also driving his team’s creativity with his passing and interplay. Crucially, the last six months have seen Le Fée evolve where Lyon’s similarly able midfielder Houssem Aouar hasn’t. Aouar, now 24, has failed to apply his talent consistently and often remains an elegant but ineffectual passenger having never mustered the same spirit Le Fée now shows in confidently directing his team while retaining his traits as a velvety creator.

Having been moved further from the goal, Le Fée’s output is a little underwhelming, however. Despite Lorient’s lightning start, his first 13 league games this season produced just two goals and two assists. However, he managed just five goals and assists in each of the previous two Ligue 1 seasons and, as his key passes tally shows – Le Fée also makes France’s top ten for progressive passes and crosses, the midfielder is providing assists for assists or intelligent passes to breaks lines rather than directly setting up shots. Goals could be seen as an issue for potential suitors, however. A strike in that 6-2 defeat of Les Verts in April was only his second senior career goal and he managed just four in 119 games for Lorient up to the start of November.

Those 119 senior appearances are perhaps Le Fée’s greatest asset, however. This is his fourth full senior season, his third in Ligue 1, a run that has afforded him meaningful experience while developing his game away from the spotlight other young prospects struggle with. Ligue 1’s ever-growing reputation as a proving ground for young players can be counter-productive in that burgeoning talent is being lured away increasingly early, often under-baked. Having avoided making a hasty move overseas amid Bundesliga offers last summer, 2023 interest could be perfectly timed for the player’s development. The 22-year-old creator-turned-destroyer has always had the ability to succeed amongst Europe’s elite but, as Abergel pointed out, he’s now proving he has the heart to match.