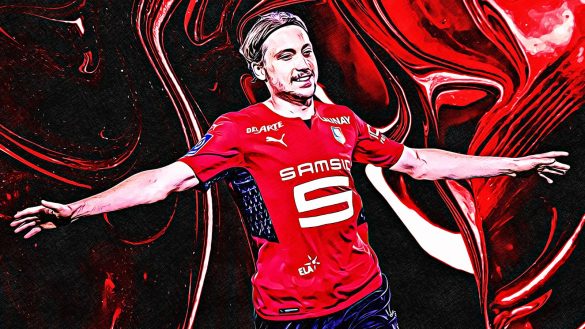 With most elite teams in world football now playing a variant of either 4-3-3 or 3-4-3, the number ten position has slowly been ebbing out of the game in recent years. This acute tactical swing has ensured that the most technically creative and naturally gifted forward players must often either move out wide or drop deeper into a number eight role with more defensive responsibility to be sure of a start. One such player who still naturally fits the bill as a traditional number ten is Rennes’ Croatian midfielder Lovro Majer.

Even so, far from one-dimensional, the 24-year-old has adapted his game to become an elite right-sided number eight too, and his influence is by no means limited by where he’s situated on the pitch. This adaptation has arguably brought out the best in the Croatian whose technical proficiency, match intelligence and vision enables him to operate in deeper positions, dropping in to pick up the ball and float passes in behind or unlock deep blocks with intricate interplay around the area. A player who seems to have time and space on the ball whenever he picks it up, Majer is able to slow the game down to his tempo before bursting into life with a defence-splitting pass or a mazy dribble.

As a result, it’s no surprise that Arsenal have sent scouts to watch the ‘new Luka Modrić’, the two Croatians bear a striking physical resemblance as well as similar playing styles, despite the fact the 24-year-old hasn’t been a guaranteed starter for Rennes at times this season as Bruno Genesio searches for the right balance. Genesio’s recent move to 4-4-2 hasn’t suited Majer, who naturally operates best in a midfield trio rather than as part of a double pivot. As a result, Baptiste Santamaria and Flavian Tait have been preferred more regularly than the Croatian, with Genesio opting for stability in midfield, flanked by the creativity of Benjamin Bourigeaud and Martin Terrier out wide.

Rennes are stacked in forward areas and competition for places has become a barrier to Majer’s development. However, he remains one of Ligue 1’s most aesthetically pleasing and elegant players, ticking the statistical and eye-test boxes. Majestic on the ball, Majer has a glue-like dribbling technique, meaning he always looks to be in complete control of his surroundings. He may not be the paciest player on the pitch but the speed of his movement and quick feet ensure he always seems to be one step ahead of his opponent, often fooling defenders into lunging challenges before dancing away. His speed of thought is equally impressive, with Majer able to quickly adjust the angle of his body to open up different passing lanes upon noticing a third-man runner.

Majer was perhaps the least heralded of Rennes’ group of eight figure transfers last summer and the now 24-year-old, who joined late in the transfer window from Dinamo Zagreb, struggled with fitness upon arriving in France. As a result, Majer didn’t make his first Ligue 1 start until November 7th. However, the Croatian’s quality was immediately obvious as a bewitching display led to Rennes to a 4-1 rout of Lyon, a score line that flattered OL. The rest of the campaign was punctuated with a series of omnipotent Majer performances as Genesio’s free-wheeling Rennes scored 82 league goals and became France’s premier attraction. A 5-0 win over Saint-Etienne and another mauling of Lyon stood out as Majer quickly became one of Ligue 1’s stars players.

That form has encouraged Barcelona to express an interest in the Croatian, with coach Xavi Hernández reportedly a huge admirer of the midfielder, while PSG, Real Madrid, Atlético Madrid and Sevilla have also been linked. Potential suitors aren’t in short supply, and for good reason. Possessing a splendid mixture of final third goal contributions and ball progression, Majer has the blend of qualities that any midfielder in world football would wish to have, and his underlying numbers back this up.

Despite his intermittent use at Rennes of late and a fairly small sample size of Ligue 1 performances, Majer is already becoming one of Europe’s elite creators and is arguably already deserving of a move to one of the superpowers on the continent, something that could well happen in the not-too-distant future.