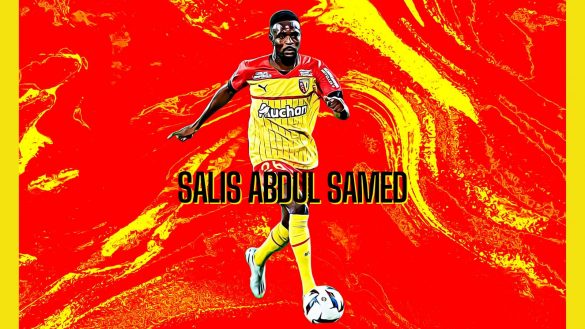 At 18-years-old, Salis Abdul Samed made the 500km voyage from Ghana to the Ivory Coast to join the JMG Academy, a training centre set up by former France international Jean-Marc Guillou – hence the self-titled acronym. Academies such as JMG have provided vital pathways for African talent to forge a career in Europe’s top five leagues. JMG’s most notable former graduate is former Lyon defender and Belgium international Jason Denayer.

If you told an 18-year-old Abdul Samed that he would be representing Ghana at the World Cup only three years later, he might have dismissed the possibility as little more than a dream. If you added that he would be playing for an exciting and ambitious Ligue 1 side chasing a star-laden Paris Saint-Germain at the top of the table, he would have probably laughed at you.

However, that dream is now becoming reality for the defensive midfielder. The move from Ghana to the Ivory Coast was the first step before a 4500km voyage to the central French town of Clermont Ferrand and then a more recent five-hour motorway journey north to the historic mining town of Lens. However, the 6000km voyage from Lens to Qatar has topped the lot.

Covering distance isn’t only something which characterises the midfielder’s story, it’s the essential hallmark of his playing style. On signing for Lens for €5m in the summer, the young midfielder was described by the then-sporting director Florent Ghisolfi as the “complete midfielder” with attributes of “a player who has a lot of pace, a lot of running and a lot of intensity”.

Ghisolfi was proved right just before his departure to OGC Nice in October as Abdul Samed was ranked second in Ligue 1’s distance covered metric, covering an average of 12.2km each game for Lens. Of course, there’s a lot more than just running to his game. At 22-years-old, the Accra-born midfielder has slotted seamlessly into the much-adored Cheick Doucouré role, who that Lens fans grew to love last season at the base of Franck Haise’s midfield. He completes underrated work in positional play, ball retention and passing that has acted as the springboard for Lens’ deadly attacking play this season. No Doucouré? No problem.

It may seem rather silly now, but there were some doubts over Haise’s side during pre-season. Questions were being asked over whether Lens could cope with the loss of some of their key players such as wing-back Jonathan Clauss and indeed current Crystal Palace man Doucouré. Lens had finished seventh in Ligue 1 and many season previews only saw them maintaining, or even slightly improving on, that position. Even the most avid believers in the Franck Haise project underestimated the power of its continuity.

That continuity is seen in the stability of an established system at Lens. Firstly, this manifests itself via Franck Haise’s system’s on-field tactical set-up and the power of an established structure that all the staff and players hold an absolute belief in. A simple idea but one that’s missing in a lot of underperforming Ligue 1 sides.

Secondly, continuity is seen in the system’s resilience to the harsh realities of modern football – a big team with a lot of money will come and buy your best players, your manager and your coaching staff. What do you do when a Premier League side comes knocking? What’s the ‘continuity’ plan?

Lens has provided a lesson in resilience this season that speaks to the trials and tribulations of the former mining community it represents, and Samed is the on-pitch manifestation of that. Abdul Samed is both the product and the purveyor of Lens’ determined and continued success this season and his success and continued upward trajectory can feed into Ghana’s World Cup campaign to aid national team manager Otto Addo.

The World Cup is often a showcase for young underrated talent such as Abdul Samed, who should expect plenty of minutes in the Black Stars’ midfield in Qatar. That’s despite Samed already refusing a place as a reserve call-up for Ghana’s last round of international fixtures. He’s a young man with ambition and his performances in Ligue 1 have more than merited a potential place alongside Arsenal’s Thomas Partey in midfield.

Ghana have a tough group, facing Uruguay, Portugal, and South Korea, but they could be an outside tip to sneak into the knockouts as one of Ligue 1’s best-kept secrets is let loose on the biggest international stage for the first time. Can Ghana’s rising star become a driving force behind a potential Group H upset?