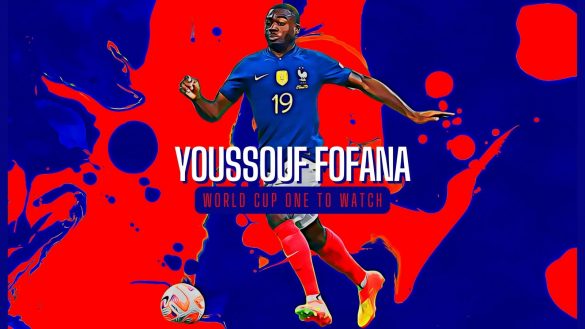 Without a club at the age of 15, Youssouf Fofana almost quit football entirely on two occasions at the age of 17, and only signed his first professional contract at the age of 19. Until September this year, the now 23-year-old had never been called up to the France squad. Not only will he now travel with Les Bleus to Qatar, he could start.

In the words of Fofana, he left through the “small door” of France’s national academy, Clairefontaine, and returned through the “big door”. At 18, the Monaco midfielder left INF Clairefontaine with his dreams of becoming a professional footballer in tatters. Retrospectively regretful of his misplaced assumption that, by virtue of where he was, he would make it in the game regardless of the work he put in, his World Cup call-up is a recognition of a hard but ultimately fruitful self-reflection.

Having delivered pizzas to make money as a teenager and having devoted himself to his studies since leaving Clairefontaine three years prior, Fofana was given a second-chance at Strasbourg. Following a trial at the Alsace club, he was offered to play with the reserve side, an opportunity he steadfastly seized. However, in that moment, there was a newfound determination – a result of his previous squandered opportunity. “The owners at Strasbourg told me: “We’re going to put in place a train ticket system so that your family can come often.” But I told them very clearly: “No, thank you. They’ll come and see me when I’ve signed a professional contract, and not before,” Fofana told L’Équipe earlier this year.

Since, Fofana has enjoyed an incremental rise, firstly at Strasbourg where he spent just one year with the professional squad, racking up 41 appearances, and then at Monaco. Since joining the Principality side in January 2020, Fofana has made 115 appearances, and is now enjoying his best season yet. Last season, Fofana was overshadowed by his midfield partner Aurélien Tchouaméni, whom he is now set to play alongside for France. But, following the former Bordeaux midfielder’s €100m move to Real Madrid, Fofana has flourished, or perhaps more accurately, he is being increasingly recognised.

Earlier in the season, Monaco sporting director Paul Mitchell reflected on Fofana’s performances, telling Get French Football News’ Luke Entwistle, “I think Aurélien was rightly recognised for some really big and important performances with us last season, and maybe the shadow was cast too much over the quality of Youssouf’s performances for this club, not only last season but the season before.” Tchouaméni is undoubtedly a world class player, and his enormous transfer fee is a testament to that, as is the way in which he has quickly become irreplaceable, not only on a domestic level, but also internationally. However, as Mitchell told GFFN, “there was always a second actor in that midfield configuration.”

This season, in Tchouaméni’s absence, Fofana needed to step up, and he has. Throughout last season, and the start of this, he has taken on the mantle of being Monaco’s progressive force from deep in the midfield. In that sense, in a midfield pivot, he’s the perfect compliment to a more traditional number six, a role Tchouaméni can play and one that Mohamed Camara has been seen in since his arrival from RB Salzburg this summer. That stability playing alongside a well-performing number six, has allowed Fofana’s quality to shine. Like all players to an extent, Fofana is a system player, whose slick functioning is contingent upon the correct pieces being placed around him.

Tchouaméni and Fofana can certainly be described as mutually complementary pieces, and that’s why they will likely start together at the World Cup, representing a stratospheric rise for a player whose career was almost over before it ever began. There is a certain well-founded logic in reconstructing last season’s Monaco midfield pivot in the World Cup. With a limited time to construct automatisms, Fofana and Tchouaméni aren’t building up from ground-zero. Didier Deschamps’ tactical decision to revert back to a four-man defence means that another player will be added to that midfield mix. Given that that area of the pitch has been haphazardly reconstructed following injuries to Paul Pogba and Ngolo Kanté, it will be important to establish some kind of continuity, the tested formula and the former Monaco teammates represent that.

From out of the blue, Fofana has therefore found himself in what would have seemed like an improbable scenario even just a few weeks ago, of being a likely and deserved starter at the World Cup. Given the speed of his emergence as an international-level player, it would be reasonable to assume that Fofana got carried away when hearing his name during Deschamps’ televised squad announcement. But his irregular pathway has taught him to react differently. “I told myself that, in a career, you can’t aim higher than playing in such a big competition like the World Cup with the French national team. I thought about everything that I came through to get here. That allowed me to come back down to earth and keep clear-minded,” said Fofana following his selection.

Whilst Fofana believes that his selection perhaps changes people’s perception of who he is as a player, he says that that doesn’t bring added pressure. In such a whirlwind environment as a World Cup, blocking out external and internal pressures will determine whether or not he’ll be a success. Fofana isn’t going to Qatar as a passenger. France desperately need him to perform.