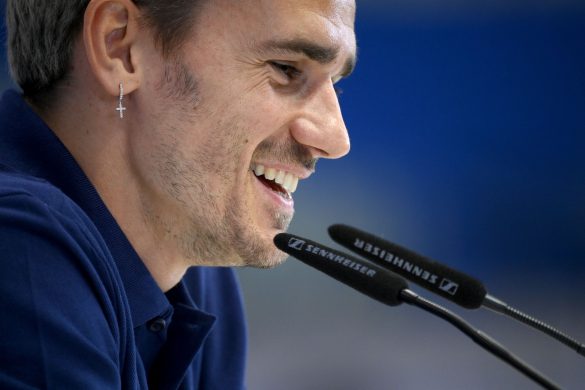 In France’s press conference, covered by L’Équipe, Antoine Griezmann spoke about his new role in France’s midfield. The Atlético attacker, more accustomed to a forward role had this to say, “It’s quite freeing, being there in the relationship between defense and forwards. Defensively and helping my teammates offensively, putting them in the best condition.”

This change in positioning for Griezmann may have happened for a few reasons. While Griezmann is still a great player, it may be difficult to justify starting him ahead of some of the other French attackers. However, Griezmann has alway been a player who tracks back and plays deeper which allows him to still be effective and gives France balance. In response to France’s attack-heavy roster he had this to say, “There are more attacking players, but we need to be balanced. Without a great defense, you don’t win the big competitions. We’re all focused on that, even if we have attacking players.“

The only downside to the World Cup winner playing in a deeper role is France loses him in the attack. When asked about playing so far from goal he stated, “I had the opportunities. I may be less close to the opponent’s final third but I play good matches. I’m not a player who will shoot 50 times per match. I don’t get headers in relation to the goal. The team needs me more in the heart of the game.”

At 31-years-old Griezmann returning to the World Cup is unlikely, but he did not rule out the possibility stating, “We’ll have to see with my performance. We’ll see. If it happens, I will have gained extra pounds and I won’t be able to play in the next World Cup. You also have to perform well at club level, so we’ll see.”

Griezmann is right. Balance is critical to move forward in this tournament. The World Cup winner has been efficient on both sides of the ball. In the match against Denmark for example, he recorded 6 duels won, 4 tackles, 2 interceptions and an assist. Deschamps move to put Griezmann in the midfield may end up being the key for France’s success in the World Cup.