INTERVIEW | Gaëtan Laborde: “We know that we can do better, but I think we’re on the right track.” 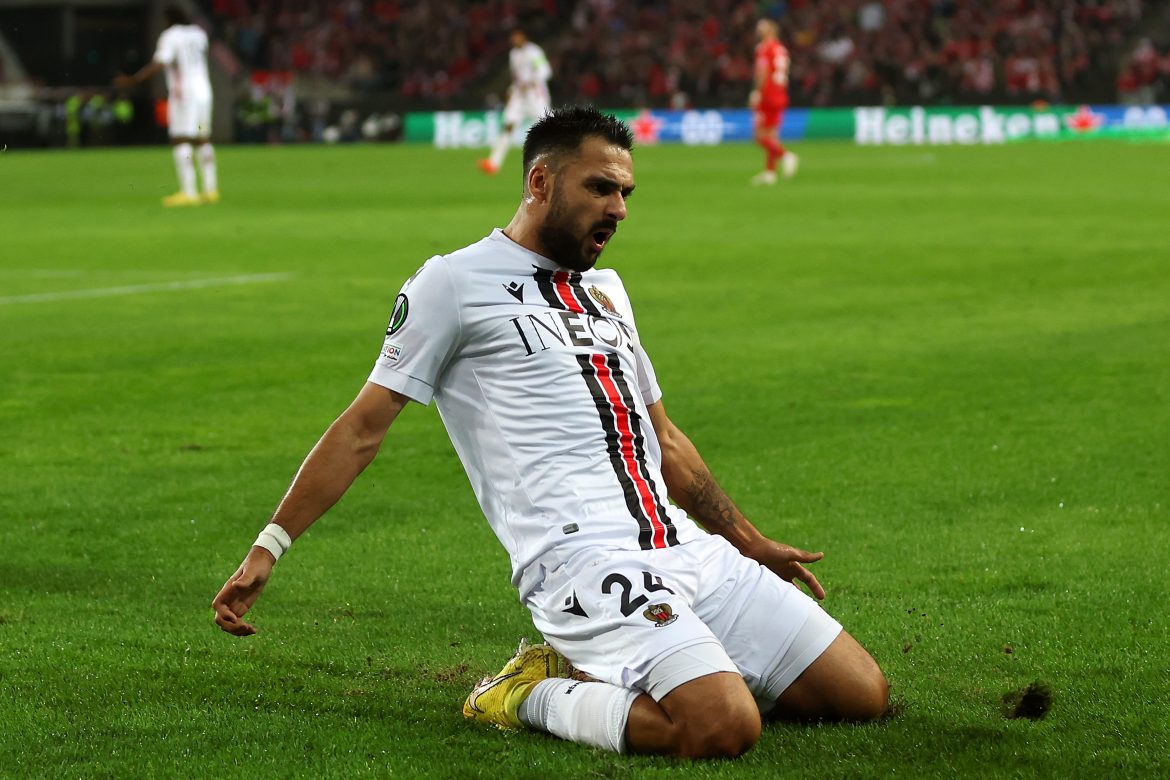 Speaking in an interview with Get French Football  News’ Luke Entwistle prior to the World Cup break, OGC Nice striker Gaëtan Laborde (28) reflected on his start to life with Les Aiglons, refinding his “magic” with former striker partner Andy Delort, the quality of Arsenal loanee Nicolas Pépé and the areas for improvement heading into the second half of the season.

On a personal level, how do you evaluate your start to life at OGC Nice?

I didn’t have too much success when I first arrived, the goalkeepers made some good saves, but since, things have gotten better. I’m starting to provide what I need to the team: lots of good runs, a strong mentality and goals. That’s starting to change. It’s never easy changing clubs, getting used to a new dressing room and within a new context. I think today, everything is slotting together nicely. I think on the pitch things are going quite well.

How do you explain your slow adaptation relative to how quickly you hit the ground running at Rennes?

I was speaking to Andy (Delort) and he said that in the first matches, I hit the post twice, and I would have had a couple of assists as well if my teammates hadn’t hit the post as well. If those go the other way, you say that I’ve had an exceptional adaptation. In terms of stats, things would then look different. I look at more things than simply statistics. Now that things have begun to turn, the report is quite positive.

Could that difficulty in adapting also be partially attributed to the club’s form and difficult dynamic prior to your arrival?

It’s true that when you’re in a team that is struggling, you can’t revolutionise the game either. It’s one of the reasons for that start, It’s not necessarily me, another player, or another. Compared to Rennes, it was difficult, because the situation was completely different. It’s obviously a lot easier to fit into a team where everything is working well. The dynamic of the team is important when a player arrives.

With your former strike partner at Montpellier, Andy Delort, out injured, it must have been disappointing not to rekindle that on-pitch dynamic.

Of course. Everyone knows the link that I have with Andy both on the pitch and off it. His injuries haven’t helped. Every time we have managed to play together, there have been little things that haven’t gone our way, for example, the red card after 10 seconds against Angers. The matches that we have had together have been good, but it’s a partnership that is also reliant upon the organisation of the team. We’re slowly refinding it though.

To refind our magic, we have to play together. You saw in the match that we played together against Köln, I should have scored from his pass, but I hit the bar, then I provided a pass and he could have scored. But we haven’t had lots of matches. It’s frustrating. We’re telling each other that we want to play together because we have fun when we’re both on the pitch. We both know that when we’re both on the pitch, things will go well.

You have often been partnered with Nicolas Pépé in recent times. What have you made of his performances since his arrival on loan from Arsenal?

He is coming out of a bit of a difficult period, so he needs a bit of time as well. Nicolas doesn’t have to prove anything to anyone. In terms of his quality, he is an extraordinary player. I think it’s maybe a new role for him. He has to adapt to that. He is more of a winger, and now he’s playing more centrally. But with his qualities, he can play wherever and play well.

Did the international break for the World Cup come at the wrong time for you?

Not especially. We have played a lot of matches as well, so physically, it does us some good to relax a bit. It’s true that it’s always good to finish well so that we can go on holiday a bit calmer and more positive mentally and then to come back without being too detached. There’s not really a good time or a bad time to stop. It’s good that the team has reacted well, and that I am having more success as well, but it’s not that everything is going to shift

Do you think that the well-being of the players is being neglected with the sheer quantity of matches being crammed into the schedule?

I think that those who make the schedules don’t necessarily have much choice. On the pitch, we adapt. We like to play matches so on a physical level, it is up to us to optimise our recovery and all of that. Today, we’re managing to do it. The best period we are having is when we’re playing the most matches to play. But, of course, it increases the risks with so many high-intensity matches, but that is football. If you ask a player what he prefers, he will say he prefers to play matches than to train. It’s true that the heavy run of fixtures suits us, even if it is physically difficult.

How do you account for your uptick in form?

I think there are lots of factors. I think success has turned in our favour a bit as well. I don’t think we had a lot at the beginning. I think we’re now having a bit more success. I think we’re showing better things on the pitch. I think what we’re showing isn’t bad, even if I think that we can do even better. We have a big margin for progression.

Was the talk about Lucien Favre’s potential departure a big distraction for the group?

Those are things out of our hands. What we want to do is to be on the pitch and just give everything we have. We know that in football there are rumours everyone, things that could happen, and fake news. When we were in the dressing room, when we heard the rumours we laughed about it. What we want to do is just perform well and win matches.

Can we expect to see the Laborde from Rennes in the second half of the season?

I hope so! I’m doing everything to ensure that’s the case. Five goals in Ligue 1 isn’t nothing either. Things are going better after a difficult arrival at Nice, so I’m hoping to keep this dynamic for as long as possible and score as many goals as possible. Nowadays, a striker is judged by whether he has scored or not, although I think I bring a lot more than just stats.

OGC Nice are currently ninth in Ligue 1, what is your mid-season review of the team’s performance?

Do you have the feeling that it was your form in the Europa Conference that gave you momentum in Ligue 1?

Auxerre in talks over loan deal for Marseille’s Isaak Touré