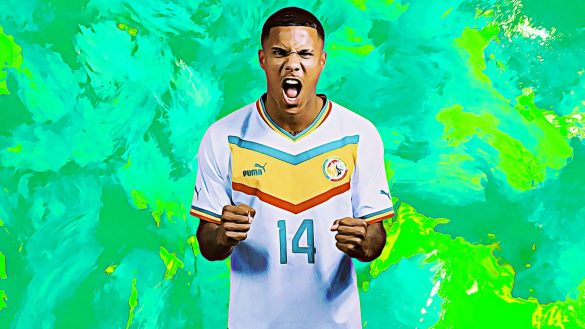 Ismaïl Jakobs’ (23) build-up to his first World Cup has been unusual, and from the outside, highly disruptive. the AS Monaco full-back looked set to miss the competition altogether through an administrative banality. The former Köln player made the relatively recent decision to represent Senegal rather than Germany at international level and featured for Aliou Cissé’s side for the first time in the final international break before the Qatar World Cup.

However, FIFA were yet to process his paperwork, throwing his whole tournament into doubt just a matter of hours before Senegal’s opener against the Netherlands. Luckily for Jakobs, and for Senegal, his switch of allegiance was processed in time.

Prior to his departure for Qatar, Jakobs spoke with Get French Football News’ Luke Entwistle in a roundtable interview in La Turbie and explained his decision to opt to represent Senegal.

What does this first World Cup mean to you?

I’m excited, and I’m proud. I’m just excited to go there and see what awaits us.

Why the choice to play Senegal?

It is a decision from the heart when you choose to represent Senegal. It’s not a decision against Germany. Senegal is my father’s country and I felt a lot of love from the country and from the people. It’s very special to represent Senegal. It’s not like perhaps in Germany where when you leave the national team, you’re just a club player. In Senegal, everyone just supports the national team. It doesn’t matter where you play your club football. It’s really nice.

It’s crazy because I’ve only played once for the national team and it was in Europe. The players have told me that when we play in Senegal it’s amazing, but even when we played in Orléans, there were 10,000 people and it was unbelievable. I also wanted to get closer to my father’s country. Now I’m going to go to Senegal more often. Because of football, I couldn’t go often, but I’ve been a few times.

You’ll have to learn French now?

I’m taking French lessons, and I’m already improving. Everyone speaks English well, including the coach. When there are meetings in French, I understand them. It wasn’t a problem to adapt. Sadio Mané has said he’ll help with the French and I’ll help him with the German. He spoke a lot to me. Arriving here, everyone was nice and it was easy to connect. All the big players like Kalidou Koulibaly were so nice.

In the newspapers, there was already a lot of talk about switching allegiance, but I always said that if the coach rings me then I will think about it. When he called me I said I’d talk with my family and with my agent, but I made the decision pretty quickly. Krépin Diatta helped as well. He said positive things and he gave my number to Aliou Cissé.

Is there pressure coming into the World Cup as African champions?

I don’t feel that pressure yet. I think in general, we have a very good squad and high ambitions. I don’t think that we have pressure, just ambition.

How is Aliou Cissé as a coach?

He was a hard player and he is a hard coach. I think he has a similar ideology as Monaco: he wants a physical team. The training is really hard. Off the pitch he is a nice guy. The coach wants to win the World Cup. He’s very ambitious.

Do you feel as though you have his confidence?

How does it feel to face the host country?

I was actually in Qatar with Köln in 2014/15 and they were already building the Aspire academy. We were playing against the youth team, who are now able to play in the World Cup. It’s kind of crazy because I was there playing against the academy and now I’m going back there for the World Cup. It’s nice to play the host country. It doesn’t bother me if the whole stadium is against us.