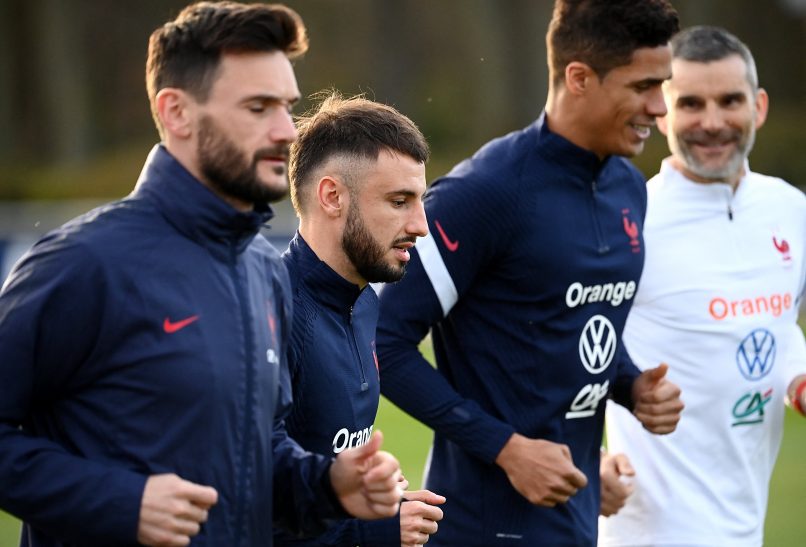 After his first call-up to the French national team, 30-year-old right-back Jonathan Clauss described his week with the squad in an interview with RMC Sport, detailing the relationship he formed with Raphaël Varane and Didier Deschamps, as well as his intentions to remain in the squad.

On Raphaël Varane taking him under his wing:

I don’t think it was an instruction from the coach. I think it was the man instead. I’m thirty, I had the impression that I was the protégé of all the players. Whether it was Varane or all the others, of course he made it easy for me, because he was the first person I spoke to, I found my feet with him, it’s very easy when Varane takes you under his wing. You’re not seen as any better or worse, but just someone who is part of the life of the group, and it’s so great.

On the quality within the squad:

The first training session we did on the Tuesday and we did the famous 11-a-side with the leaning goals. And at the end of the session, I said to myself, ‘right, ok I understand where I am.’ It goes very fast, it’s very accurate, is always the right decision? When you don’t have the ball, you have to work hard physically because, to get it back, you have to give ten times more than usual. The difference is huge at this level.

What was Didier Deschamps’ speech about?

It was a speech about coming in with confidence, by telling me that I was there. Now that I’m here, I have to show what I know I can do. But he had no doubts because I’ve been doing it for a year and a half. This aspect of confidence and legitimacy, you have to take it into account and tell yourself you deserve your place. Take advantage, try to relax as much as possible. It was a father-son speech, or that’s how I took it, I know what you’re going through. But I can also tell you how things can eventually go if you do things right.

On his future with the French squad:

It would be a lie if I said [I don’t want to return]. Obviously I’m thinking about it now that I’ve tasted it. I want to do everything to come back. But, there are deadlines coming up, I have to manage to do each part of things. If I think too much about the French squad, I’ll fly too close to the sun and hinder my own progress. You have to be able to separate the two situations, even if it’s in the back of my mind.