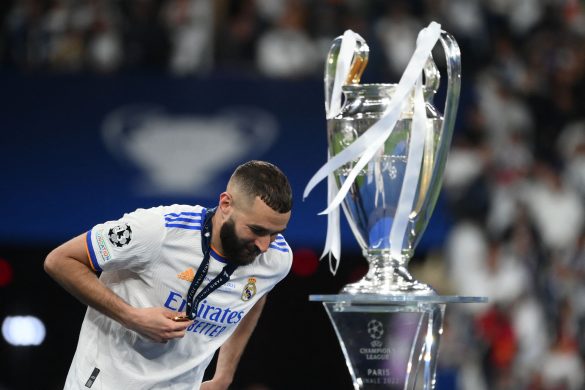 In an interview with Téléfoot this morning, France striker Karim Benzema discussed winning his 5th Champions League with Real Madrid, capping off a potential Ballon d’Or-winning campaign as he scored 49 for club and country.

The former Lyon man pointed to the La Liga side’s previous opponents as evidence that this year had been the hardest of the five to win, and thanked goalkeeper Thibaut Courtois for his man of the match perfomance.

“I’m happy, I’m proud, I’m full of emotions. I don’t think it’s sunk in yet. But you think back to the whole Champions League campaign.”

“It’s been the hardest out of all the ones I’ve won, because we’ve only played big teams from the knockouts.”

“A team needs a goalkeeper like that, who can pull out a save when it’s almost a goal. So now we’re thanking him.”

“[On him and Vinicius] It’s clear that this year we’ve scored a lot of goals and had a lot of assists which is good. But that’s because we’re up front. We had a great season, but so has everyone.”