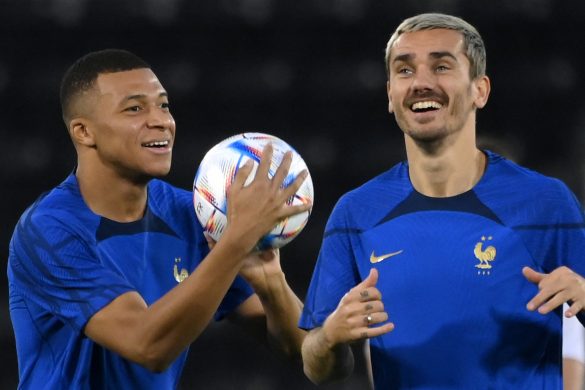 L’Équipe report that both Kylian Mbappé and Antoine Griezmann will be rested for France final group stage match, against Tunisia this afternoon.

The Paris Saint-Germain forward was seen in training yesterday with a bandage around his left ankle, in what was reported to be a lingering issue from a knock he took while playing for his club, which emerged again in the win against Denmark. He was nevertheless able to complete the training session.

However, France’s top scorer so far at the World Cup has asked Didier Deschamps to rest him for today’s game, which the manager has agreed to  – although Mbappé could still come off the bench at some point during the game.

Griezmann, who has been adapting to a new all-action midfield role, is also set to be rested, having played the entirety of Les Bleus’ first two games. As a result, Mattéo Guendouzi could be in line for a start while Kingsley Coman will partner Marcus Thuram in attack. L’Équipe also add that Axel Disasi will make his first start for Les Bleus, from right-back.