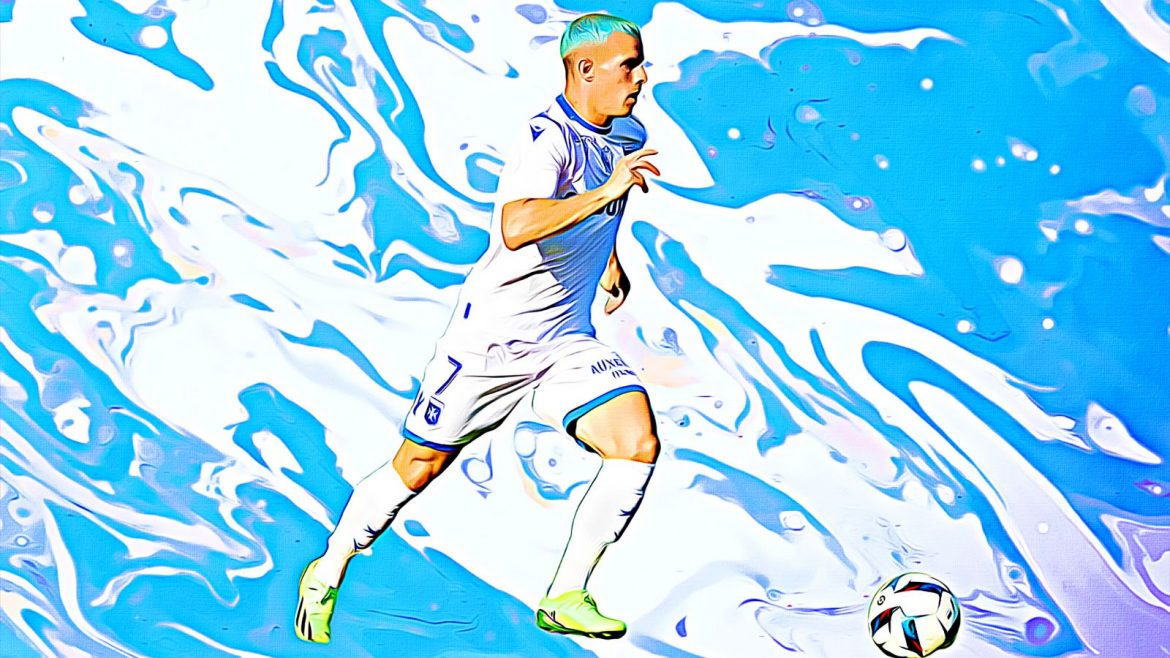 This article is taken from GFFN’s FREE 2022/23 Ligue 1 Season Preview Guide, which will be available to download in full this weekend. Keep an eye on Get French Football News for our team’s analysis of every team and much more.

Key Man: Gaëtan Charbonnier – Gaëtan Charbonnier was Ligue 2 top scorer last season, just behind Toulouse’s English forward Rhys Healey, and Auxerre will be banking on their striker to score the goals to keep them in the top flight this year. His 17 strikes amounted to Charbonnier’s second-best league campaign, behind the 27 goals he managed during the 2018/19 Ligue 2 season. Back then, Charbonnier was at Brest, the fifth club of his career, and it was hoped he could continue such prolific form against stiffer opposition upon promotion. However, as at Montpellier and Reims before, the 6’3 striker failed to score more than six Ligue 1 goals the following year. That’s worrying Auxerre fans, but Charbonnier has improved with age. The former PSG man excels at bringing others into play and holding off France’s most physical defenders. Of course, unlike in the second division where Auxerre were dominant in possession, AJA will likely be forced to sit back more often this year and the now 33-year-old may struggle with being further away from goal. His heading ability should remain an asset, however, after he hit five from crosses and corners last season.

Signing To Watch: Kays Ruiz-Atil – Arriving on a free from Barcelona, after the club terminated his contract in May, the French-Moroccan Kays Ruiz-Atil is the latest former ‘Titi’ (PSG academy player) to look to build a career away from Paris, in Ligue 1 and overseas. He’ll hope to replicate the success of Mattéo Guendouzi and avoid the fate of Adil Aouchiche, who gambled on joining a struggling side in Saint Etienne in 2020 – aside from lacking form and game time, the 20-year-old now faces a year in Ligue 2. Ruiz-Atil may not have been prolific at youth level for PSG or Barcelona but he’s a highly-regarded, talented youngster who carries the ball forward effectively while adding creativity and skill. Unlike many a PSG youth product, the 19-year-old was seen briefly in Paris’ first team under Thomas Tuchel, playing seven games in the 20/21 season, showing his quality on the ball and looking at home alongside Paris’ stars.

Squad Analysis – Incredibly, despite letting go of six players and signing five others, Auxerre haven’t officially spent or received a single euro in the 2022 summer transfer window so far. Ruiz-Atil joins alongside 35-year-old Ligue 1 stalwart goalkeeper Benoît Costil, midfielder Youssouf M’Changama from Guingamp and defender Dénys Bain from Brest. Between the latter pair plus full-back Brayann Pereira, who joins from Lens, those three signings have just 19 career appearances in Ligue 1. That inexperience is a more general concern too, especially considering the losses of marauding right-back Carlens Arcus to Vitesse and 26-year-old centre-back Gautier Lloris who joined Le Havre. As a result, Ligue 2 specialist coach Jean-Marc Furlan will have to make do with what is effectively a second division squad after a fairly uninspiring window so far.

Strengths – Despite their lack of proven Ligue 1 quality, Auxerre’s midfield boasts significant creativity and vision. The technical but explosive M’Changama has long been one of Ligue 2’s premier creative midfielders while forward Mathias Autret deserves another chance in Ligue 1 after an underwhelming season at Best in 19/20 having become prolific in Ligue 2, providing 25 assists in his last three seasons as well as 21 goals. Both ensure that Charbonnier, another second-tier specialist, is likely to get sufficient service. But perhaps AJA’s biggest strength is their supporter base. This historic club return to the top flight for the first time since 2012, a period in which legendary coach Guy Roux led the club to the 1996 Ligue 1 title as well as two Coupe de France wins in the mid-2000s. AJA were the fourth-best supported club by attendance in the second tier last season, and Stade de l’Abbé-Deschamps’ 18,500 capacity will hopefully be jam-packed this season.

Weaknesses – Auxerre were one of the biggest long-range-shooters in the second tier last season, just two sides attempted more shots from outside of the box, and that’s a tactic that is less likely to lead to goals against higher-quality keepers in Ligue 1. Meanwhile, in joining a league famed for producing young players, Auxerre are relying heavily rely on their experience and pragmatism. They were the third-oldest side in Ligue 2 last season and nine regulars are already into their thirties. Even if Furlan and his team were to avoid one of the four automatic relegation places this season, this squad is built for the very short term.

Verdict – It’s hard to place Furlan’s side anywhere above the bottom five. Ligue 1 has improved significantly since the last time Auxerre resided in the top flight, with bottom half teams Reims and Clermont boasting notable quality. The best this side can hope for is hard-fought survival but, with a raft of teams in similar positions in the bottom half of the table, they stand more than a fighting chance.