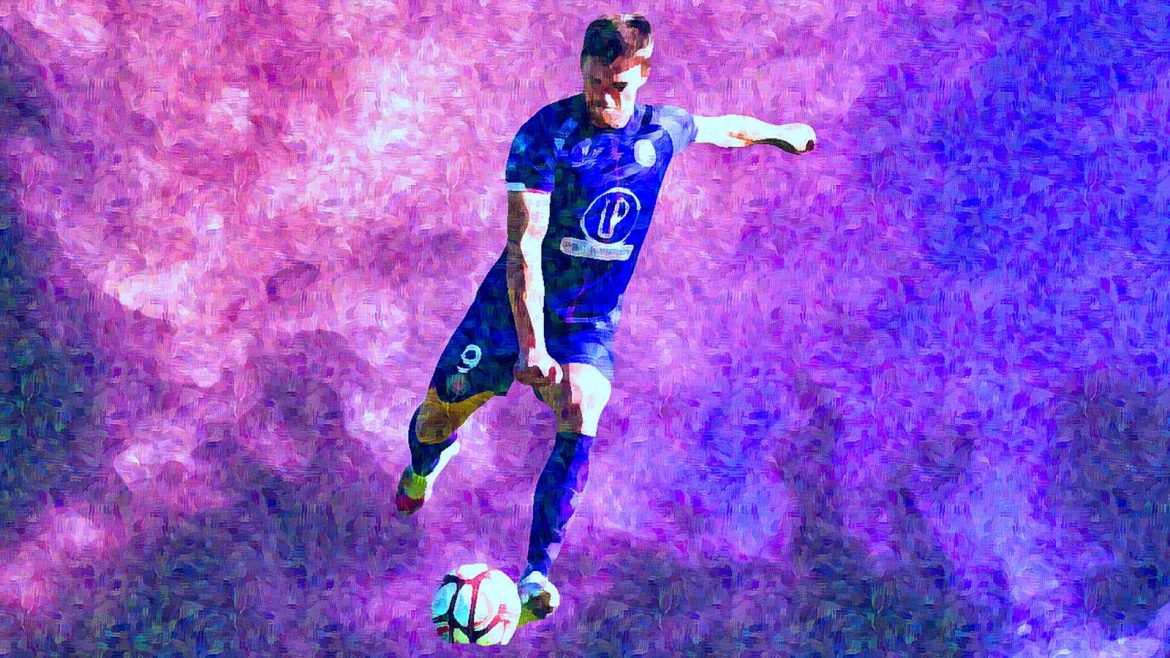 This article is taken from GFFN’s FREE 2022/23 Ligue 1 Season Preview Guide, which will be available to download in full this weekend. Keep an eye on Get French Football News for our team’s analysis of every team and much more.

Key Man: Rhys Healey – Becoming Ligue 2’s leading scorer last season was, until now, the culmination of a unlikely journey for English striker Rhys Healey. Costing just £500,000, Healey unexpectedly arrived in France two years ago from League One MK Dons after 11 goals in 18 games during the 2019/20 season. Healey had struggled for form across six loan spells away from Cardiff City, taking in Dundee, Torquay and Colchester. Now 27, Healey’s 35 Ligue 2 goals in 65 games, including 20 last term, suggest he’s finally found a home. A poacher with a keenness to think outside the box while usually playing within it, Healey’s eye for space and controlled finishing has made him a menace for Ligue 2 defences. Although he’s clinical in the classical sense, Healey is capable of manufacturing goals his rival couldn’t via a series of flicks and shimmies – he even scored while sitting on the turf. Having already played in the top five English divisions as well as the Scottish and Welsh top flights, in large part thanks to his precise finishing Healey count now add both Ligue 2 and Ligue 1 to his list. More goals will be needed if he’s to avoid another change of divisions.

Signing To Watch: Zakaria Aboukhlal – Although left-back Oliver Zanden (20) has been brought in from Swedish club Elfsborg alongside Dutch second tier Excelsior’s forward Thijs Dallinga (22), both are likely to be little more than cover. As a result, Moroccan international forward Zakaria Aboukhlal is TFC’s only major addition this summer so far. Typically a wide forward, the 22-year-old managed nine league goals in 69 games for AZ Alkmaar who finished fifth in the Eredivisie last season after he graduated PSV’s youth system in 2019. Despite some good European experience and 11 Morocco caps, including four at January’s AFCON, considering the lack of options in the rest of the squad, Aboukhlal’s signing seems odd given he’ll face stiff competition from a host of in-form forwards in the deepest area of the group. However, while it’s likely coach Philippe Montanier intends to strengthen other areas in time too, the Moroccan’s arrival suggests the coach is considering switching to a 4-2-3-1.

Squad Analysis – Toulouse enter the new campaign with an almost identical squad to their promotion season. Although TFC were comfortably the second tier’s most effective side, they won a weak division and Montanier had less to work with than Patrice Garande, who’s incarnation finished third the year before. As such, cover for a stable back four is almost non-existent while Australian international Denis Genreau is the only reliable option off the bench in midfield. There’s more attacking versatility in the forward positions that support striker Healey but Montanier’s squad is precariously thin overall. Unless TFC plan to trust a raft of promising but largely untested youngsters, like 20-year-old high-regarded Cameroonian midfielder Steve Mvoué, signings are desperately needed before September to add depth. However, an eleven which almost picks itself has poise, vision and skill throughout, although holes could quickly start to appear.

Strengths – Despite Healey’s importance as a goal threat for Montanier, three others made double figures in the league last season. Free-kick specialist, technical midfielder and the second tier’s standout player, Branco van den Boomen managed 12, while wide forwards Rafael Ratão and Ado Onaiwu managed 11 and 10 respectively. Rapidly developing winger Nathan N’Goumou (22), who supplanted the skilful pair as Healey’s first choice support act at the end of the campaign, managed eight and will be one to watch this season. Montanier’s fluid and positive 4-3-3 allows for plenty of chance creation via a trio of midfielders with vision and intelligence. Van den Boomen is joined by fellow Dutchman Stijn Spierings and Belgian Brecht Dejaegere, who can be swapped out for another forward or play further up himself. With goal threat and creativity provided by so many sources, Toulouse will be a fun watch this season.

Weaknesses – So few signings means that this TFC squad is largely devoid of Ligue 1 experience which could be exposed defensively at this level. Left-back Issiaga Sylla carries the majority of the squad’s top flight appearances but he’s proven a liability for TFC in Ligue 1 previously, while a loan with Lens also didn’t work out. Goalkeeper Maxime Dupé has seen notable first team action with Nantes but Toulouse were reportedly worried about his suitability for Ligue 1, despite another solid season, and were looking to replace him. Valerenga goalkeeper Kjetil Haug has been added as competition. Toulouse’s eclectic recruitment (they’ll likely pick 11 different nationalities at one point this season) has proven deft in recent years, adding starters from Danish football, the J-League and Slovakia to consistent success. However, whether those players are ready for such a jump in quality of opposition is uncertain.

Verdict – If Montanier can replicate his expansive, attractive style of last season, few will be as fun to watch as Toulouse in France. Led by Healey, Ngoumou and van den Boomen, they have goals, ingenuity and skill but the party could be ended by even a moderate injury crisis due to lack of depth, while even their talented first eleven is almost completely unproven at this level. However, much of the bottom half of the table is in a similar position with three promoted sides replacing the underachieving Bordeaux and Saint-Etienne this year. Within that group of clubs, few have the guile or boldness of TFC and, despite the four relegation places, Montanier will be confident of survival.