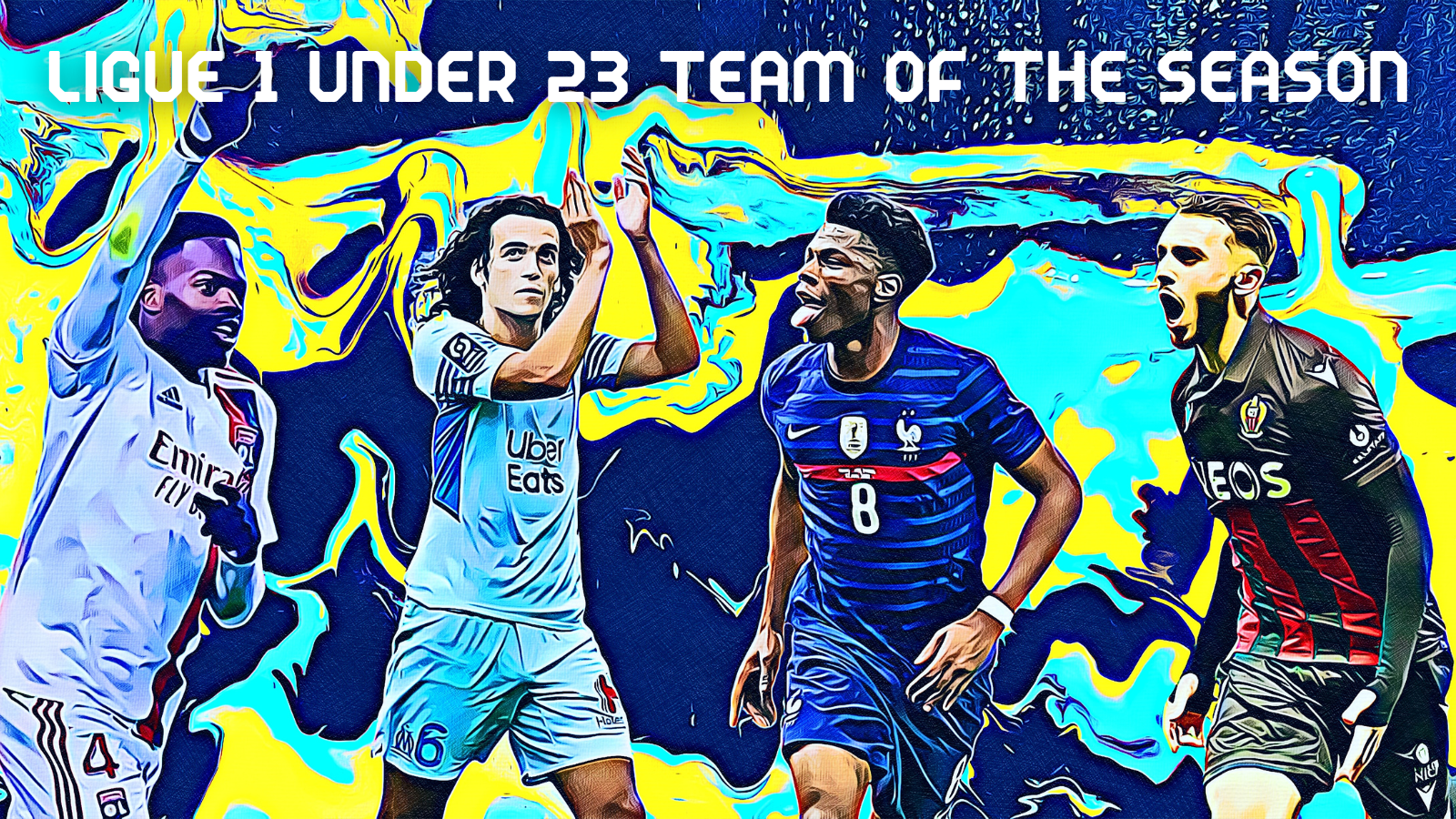 GK, Alban Lafont (Nantes, 23) – After an uncertain spell with Fiorentina, Lafont’s return to France with Nantes has been triumphant. His cat-like reflexes and improving command of his area have been complemented by a newfound confidence and consistency, making him a contender, admittedly behind AC Milan’s Mike Maignan, to be France’s next long-term number one. He provided the season’s standout goalkeeping performance in saving six one-on-ones and a penalty against PSG, for which L’Équipe awarded him a ‘keepers first 10/10 since 1997.

RB, Vanderson (Monaco, 20) – Monaco’s shock Spring resurgence coincided with both Philippe Clement finding balance in his squad and Brazilian right-back Vanderson settling into the first 11. It’s difficult to say which had more impact. A €10m January signing from Gremio, little was expected of the 20-year-old so soon, but his power, speed, positivity and vision have propelled the principality club forward in 2022. Broad but technically gifted while equally effective at right-wing or right-back, Vanderson is a rare gem and unusually refined for one so young. Monaco may struggle to keep him for much longer.

CB, Castello Lukeba (Lyon, 19) – The landscape of talent across the self-styled ‘League of Talents’ evolves considerably between August and May. At the forefront of the 21/22 cohort is Lyon defender Castello Lukeba. The 19-year-old Frenchman is a smooth operating, technically gifted, powerful centre-back who has displayed remarkable maturity at key moments this season when others have been easily flustered. With Damien Da Silva ageing, Jason Denayer often injured and Jérôme Boateng badly underperforming, Lyon’s defence is now led, with some authority, by the teenage Lukeba. Should his development curve continue, next season should see him grow into one of France’s leading defenders.

CB, Jean-Clair Todibo (Nice, 22) – Having spectacularly emerged in 2018 with Toulouse at just 18, showing graceful passing, a supreme ability to breeze past pressing forwards and a developing defensive acumen, Todibo’s career stalled after a hurried move to Barcelona. Despite playing very little since, Todibo’s resurgence with Nice in the last 18 months has been just as impressive. Although fewer risks are taken nowadays, a more stripped-back and assured style of defending remains alongside his technical ability and finely-tuned passing. Todibo has been one of Ligue 1’s leading defenders this season as part of a well-organized and rigorous unit. He’s now ready for the move that was rushed into at 18.

LB, Nuno Mendes (PSG, 19) – As PSG’s only senior player under the age of 23, Mendes’ youthful intensity and raw ability has been a refreshing addition to an often sluggish Paris team. With fellow left-back Juan Bernat struggling to recover form and fitness after a long injury, Mendes is now undisputed first choice and has often impressed with his burgeoning maturity, defensive nous and havoc-causing forward charges in some of the club’s more important Champions League games. Typically for a teenager, occasional issues with consistency and decision-making remain but the €40m option to buy PSG will soon active in the Portuguese defender’s loan arrangement from Sporting Lisbon has become an increasingly good deal this year.

DM, Aurélien Tchouaméni (Monaco, 22) – Despite a slight adjustment to his role in the team, moving from midfield dynamo to sentinel which took a little while to coalesce, 21/22 has been a breakout season for Tchouaméni. Now Europe’s premier young midfielder, a big move – accompanied by an even bigger fee – is likely this summer. Wherever he lands, Real Madrid and Liverpool are the most likely destinations, the striding Tchouaméni’s combination of astute, varied passing, defensive intelligence and perpetual midfield mobility, not to mention a focused and grounded attitude, make success among the continent’s elite more than likely.

CM, Matteo Guendozui (Marseille 23) – Morphing into the torchbearer Marseille fans have long desired, willing to fight for everything and anything, Guendouzi has become a real leader this season. His belligerent on-field persona has done as much to win midfield battles as his ability in possession. Guendouzi has always had heart but it’s not always been channelled effectively. With OM, the perfect marriage of club and player, a like-minded coach in Jorge Sampaoli has helped focus his intensity while forgiving rougher edges. Having successfully broken into the national team, this season has felt like the start of Guendouzi’s career proper.

AM, Amine Gouiri (Nice, 22) – Gouiri’s season has been split in two. Before the end of January, with Nice favourites to take a hard-fought second place despite struggling with attacking balance, the former Lyon forward had managed seven assists and 10 goals in Ligue 1. Just two goals have been added since, both in the cup. Nevertheless, Gouiri’s exacting and skilful but somewhat individualistic skillset often makes him Nice’s leading creative outlet, even if his output has stalled of late. That’s arguably more down to Nice coach Christophe Galtier’s inability to fit him, Andy Delort and Kasper Dolberg into the same 4-4-2, with Gouiri often pushed too far from the goal as a left midfielder. If Galtier wants to get the best from his precociously talented forward he may have to abandon his title-winning formation next season.

WF, Kylian Mbappé, (PSG, 23) – Despite arguably being the World’s best player right now, Mbappé’s name is one of the more surprising on this list simply due to the realisation that he’s still just 23. Mbappé has already tallied 180 Ligue 1 games, scoring 131 goals and adding 58 assists. In 53 Champions League matches, he’s managed 33 goals and 23 assists while, having been a France international for over five years already, 54 caps have been massed, scoring 26 goals in the process. That’s more caps or goals than Eric Cantona, Dominique Rocheteau or Raymond Kopa managed in their entire international careers. Although the numbers don’t necessarily show it, this season has been comfortably his best yet, never has Mbappé played with such focus, maturity or authority. What would do PSG without him?

WF, Randal Kolo-Muani (Nantes, 23) – The balletic forward play of Randal Kolo-Muani may be this season’s best kept Ligue 1 secret. Despite Nantes’ challenge for Europe and run to the Coupe de France final, Antoine Kombouaré’s team in general have gone similarly unnoticed outside western France, having been tipped for a relegation battle in August. Usually deployed as a central striker, Kolo-Muani’s deft touch, slight-of-foot and intelligent use of the ball cast him more as a creative midfielder but, as his dance through Angers’ defence earlier this season showed – which saw the rangy forward casually sit several opponents down before slotting home – he can both create and finish chances. Often at the same time.

ST, Mohamed Bayo (Clermont, 23) – Reliable goal scorers are rare in Ligue 1, especially in the bottom half, but Bayo’s 12 goals have proven that, despite relatively limited chances overall, he can translate his 22 goal Ligue 2 promotion campaign to a much higher level. Without the Guinean international’s astute movement and often clinical finishing, Clermont would be in far deeper relegation trouble. Although his output has slowed to a trickle since Christmas, as Clermont’s refreshingly gung-ho style has been rumbled by competitors with more quality, Bayo is certain to stay in top-flight football, in France or abroad, one way or another next season.

Lille’s USA international Timothy Weah “not happy” with his form