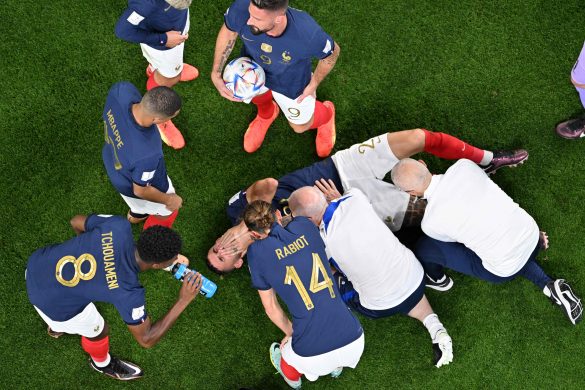 RMC Sport, L’Équipe and AFP are all united tonight in reporting that Lucas Hernandez’s World Cup is over after suffering an ACL rupture in his right knee during the first 20 minutes of France’s opening match of the tournament against Australia.

Les Bleus ended up winning 4-1, and Lucas’ brother, Théo Hernandez, who came on to replace him, had a fantastic game, achieving a beautiful crossed assist for Adrien Rabiot’s equaliser.

Hernandez’s withdrawal reduces the France squad to 24 individuals, after Karim Benzema pulled out over the weekend and Didier Deschamps decided not to replace him.

Deschamps is not able to replace Hernandez as the deadline to replace injured players was on Monday night, 24 hours before France’s first match.

Lucas Hernandez was an integral part of France’s 2018 World Cup win, producing outstanding performances in the knockout rounds of that tournament against Argentina and Belgium in particular. It will fall to his brother to bring back a second World Cup for the Hernandez family.

It leaves France with 1 recognised left-back in the squad, although midfielder Adrien Rabiot has played in an albeit expanded left-wing-back role for Les Bleus before and could fill in if absolutely necessary.

The injury to Lucas further raises questions about Deschamps’ decision to bring just one out and out full-back to Qatar in Théo Hernandez. At right-back, Benjamin Pavard and Jules Koundé, who both play as central players at club level, are expected to perform for Les Bleus during this tournament.

Olivier Giroud on Les Bleus’ poor start to the match: “What needs to be improved? The entire start of the match if we want to be better.”

Dayot Upamecano: “I am very happy with my first victory with the team and above all, my first in the World Cup”