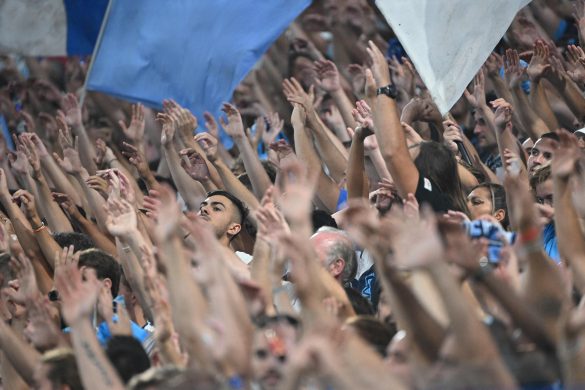 According to RMC, Tuesday’s Champions League match between Marseille and Frankfurt has been placed on the highest level of a security risk scale. Fears pre-date, but have been increased by, the recent events during the Nice-FC Köln match at the Allianz Riviera last Thursday.

3,300 Frankfurt fans have tickets for the match against Marseille at the Orange Vélodrome on Tuesday, but including those without tickets, as many as 5,000 may make the trip to the south of France, according to estimations from local police. Frankfurt also have a reputation, earned during last season’s Europa League clash at the Camp Nou, for buying out tickets in the home end.

However, measures have been taken to avoid this, and therefore avoid confrontations within the home sections of the stadium. RMC report that the French club believes that it has prevented the mass purchase of tickets for the match by German fans. Should Frankfurt fans find their way into the home section, they will either be sent to the away stand or if it is full, they will be taken to a more secure section of the stadium to watch the match.

Marseille have also decided not to sell 1,500 tickets so as to allow a large gap between the away section and the home fans. On a scale of risk that ranks from 1-5, 1 being the lowest risk and 5 the highest, the match has been ranked as a 5. It had been ranked as a 4 before Thursday’s clashes between Nice and Köln fans.

Police sources have expressed concern about the event, despite the reinforced security, and there are fears that the German presence in the city on the night has been underestimated.