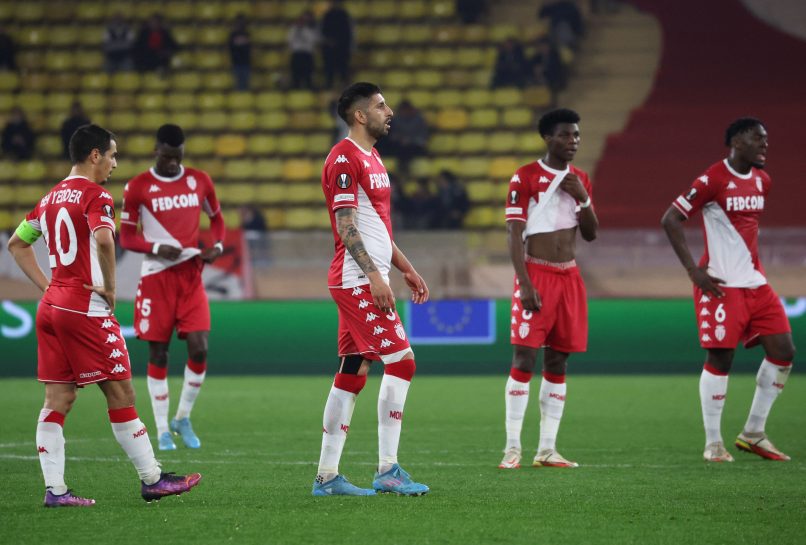 An unflattering draw against Braga (1-1) meant a promising European season ended in a whimper for AS Monaco, an impotent performance over two legs (1-3) putting to waste the good work done by now former manager Niko Kovač in the group stages.

A banner reading “Qualification or holidays: It’s up to you to decide,” was unfurled in the Ultras section of the Stade Louis II pre-match. Monaco chose the latter. A once promising looking season has come unstuck in a tragic couple of weeks for the Principality side as defeats against Ligue 1 relegation candidates, a Coupe de France semi-final defeat to Nantes, and now expulsion from the Europa League leaves Philippe Clement’s side with limited prospects heading into what should have been an exciting run-in.

The implosion has been spectacular, and, from afar, blockbuster entertainment. For Monaco fans however, it has been anything but, and they must now console themselves with a battle for the Europa League/Europa Conference places. That movie is however, much harder to flog and the buy-in from the fans can’t be taken for granted if the boos that rung around the stadium at full time are anything to go by.

As it did in the first leg, which Braga won 2-0, the away side’s pragmatic approach once again reaped its rewards early on. Just as he did in the first-leg Abel Ruiz inflicted the damage upon the Ligue 1 side. This time however, his goal came in much more fortuitous circumstances as a handy Vanderson deflection took it past Alexander Nübel in the Monaco goal.

Post-match, Clement spoke about the mental impact the goal had on his side.“The belief seeped away especially after the first goal for some players and that only intensified.” Braga continued to sit in a low-block exposing once more Monaco’s lack of creativity and incision against defensive sides, just as Bordeaux, Lorient and Reims have done successfully in the league.

Monaco, now in search of three goals just to take the game to extra-time, continued to retain sterile possession. So often they look like a side with only a first and a fifth gear. Either they build-up tediously, with limited ball progression and without end product, or have a verticality comparable to that of a Sam Allardyce side at its pomp. Although that direct style of play worked against a high Lyon line a few weeks back, it was entirely ineffective against a low-sitting Braga side who had no difficulty clearing their lines. In trying to shift from first to fifth the Monegasque machine inevitably stalls.

Monaco would have their chances to reignite the clash, but they were repeatedly extinguished by Matheus in the Braga goal. Good saves either side of half-time denied Kevin Volland and an uncharacteristically quiet Ben Yedder.

The second half was played at a fairly pedestrian pace that more closely resembled a pre-season friendly than arguably Monaco’s most important match of the season. A triple substitution, which saw the introduction of Aleksandr Golovin, Myron Boadu and Guillermo Maripán failed to spark a revival. With little fight being shown, fans began heading for the exits with over 25 minutes left, those that stayed became increasingly vocal in their disapproval of Monaco’s long-ball football.

Handed what many believed to be a relatively easy draw, Monaco have fallen at the first hurdle in the knockout stages. That strong performance under the now-unemployed Kovač has gone to waste as Clement fumbled the baton, and failed to build on the favourable position that was inherited. That surprise decision to change manager at the start of the year now comes under increasing scrutiny.

The emptied stadium had acquired an extra banner after the full time whistle. Only the word “holiday” remained on the initial banner that was unveiled pre-match; a symbol of a derailed Monaco season that had promised so much. A trophy or even Champions League qualification may be beyond them, but if they are to travel the continent next season, there is still a lot of work to be done.