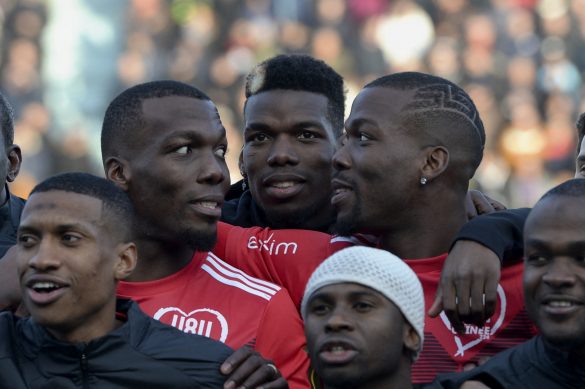 Mathias Pogba has published an open letter to his brother Paul on Twitter, which accompanies the 30 videos which detail allegations of witchcraft and more regarding the Juventus midfielder, which were automatically posted while Mathias remains in provisional detention.

“A message to my little brother”

“As expected I am where you wanted me to be, Paul. When you got Adrien arrested by lying, I already knew that you wanted to get me arrested and that it would happen.”

“This was confirmed to me when Massiré and Doudou passed on your message to the others (childhood friends) so that they could tell me to come crawling to you to beg you not to crush me. You wanted to crush my honour and my spirit, do you really think I was going to accept it? Is honour not sacred?”

“And I really knew that you were ready to do anything to keep me quiet when they suggested to our childhood friends forget the criminals who are after us, to spare themselves from your anger by abandoning me and blaming everything on me, by accusing me of being the only one responsible. So that you could tell everyone and especially your family that I’m the bad guy. Well done my brother, you must be happy with yourself even if you’ll hide it in front of others. But you can mislead others, but the family knows you who are and who I am.”

“So yes I started to speak out in the knowledge that you wanted to end it like that, in the knowledge that you would be able to mislead your world and that I would without a doubt end up where I am now. So it’s not a surprise. Even if I admit that I thought you were planning to take me out when you sent me that foreign-speaking group of people who watched and followed me, showing me that they could make me have an accident whenever they wanted, the day I went to see our mother down in the south.”

“In fact, the authorities might be able to identify these individuals on camera given that they followed me all the way to the airport. In any case, a so-called victim deploying their henchmen against people with no means to intimidate them is a weird story, I would say. Just like the fact that friends’ and family visits to the club [training ground] become so-called ambushes, just because you say so, even though it wasn’t the first time that friends, family, or even I came to see you. I had hope for you, now I know how things really are, it’s sad, my brother.”

“It’s just like your explanation of this story about being under protection for years, where everything became true based on your word alone. Well done. So either what you’re saying is true and you were very lucky for all these years, going under the radar despite your fame. Being able to walk around everywhere without bodyguards. Or you’re lying and you were protected during all these years by a mutual agreement.”

“Or maybe your protection was working for free all these years, and in the end was sick of it and asked you for payment. But what kind of thug works for free for years? So what’s the most logical explanation my brother, that, actually, you know these thugs, or the opposite? Oh yes, because you’re rich and famous, no one gives a toss about logic and truth. It’s like with your childhood friends, because you want to reduce them to silence so much, for all the wrong you’ve done to them, but you have nothing to justify your accusations, that you’re prepared to resort to the worst.”

“Now you claim, you and your supporters, that the few gifts that you gave to them for their birthdays, marriages and baptisms for years, since the start, in front of witnesses and our families, with a smile and while dancing, where actually just cases of extortion. You’ve stooped very low, my brother.”

“Not to mention Mam’s, who you exploited off the books like a slave for years, who you now want to pass off as a robber, to hide all the dirty tasks he reluctantly did for you. How much did you say he stole from you again? €200,000? With a bank card that had a limit of €2/3,000 per month which was meant for groceries and fuel? Having worked for you for 6 years? You didn’t do the maths before lying and you didn’t think about it either! Because you forget that he had permission on your bank accounts to take out €100/150,000 on your behalf every month for your witch doctor – wouldn’t it have been easier to help himself [to the money] at that point to disappear or send a big chunk to the Bahamas?”

“But yes, because Paul Pogba said it, it must be true.”

“My brother, why do you want to keep digging yourself a hole? In the neighbourhood you were saying he stole €100,000 from you, now it’s €200,000? This so-called case happened more than two years ago, now the date changed and was brought closer? Isn’t that strange? No – I’m an idiot – your level gives you the right to rewrite reality, so it’s as you say, even if things have changed and can still change.”

“Or still with me, as didn’t you say that you’d recognised me when you got held up, thinking I was one of the armed men, daring to think that I would point a gun at you – you have really disappointed me, my brother. Even though I was miles away from there with our sisters and friends that came round from the USA, with whom I stayed constantly during their stay of around ten days. Or will the story change again like with the witch doctor.”

“On that day, I didn’t even know that you were coming to the opening night, because we were on bad terms and hadn’t spoken in a while. So I also ask myself, how are you going to implicate me in this story? I hope you won’t have the audacity to claim that I was the only one to know where you were going or something like that, while you talk about your entire life to those close to you and your friends every day. I say that, but in the end it wouldn’t surprise me, coming from you.”

“But wait, if you had your hearing at the end of August, it means that if these two accusations are put forward, it means that you indeed set out a nice trap my brother – either I was there on the day you got held up, in which case I have a good alibi, [or] I would supposedly be the one who gave the information to the criminals (information which I couldn’t have had given that we were barely talking, something which the whole family including our brother can confirm). So I’m stuck in any case – well played.

“What’s more, you know very well that before June/July I wasn’t aware of your problems that you had involved everyone in. And now I’m being made out to be the mastermind!? I had to experience that to comprehend at what level of vice you had fallen to. Now I see clearly, to my detriment. Anyway, you nearly pulled it off Paul, because I have to be locked away somewhere right now, and our childhood friends must be in cells next door, but injustice and ingratitude in the long run and the Final day [judgement] is arriving.”

“Enjoy this temporary earthly success and kiss my nephews.”