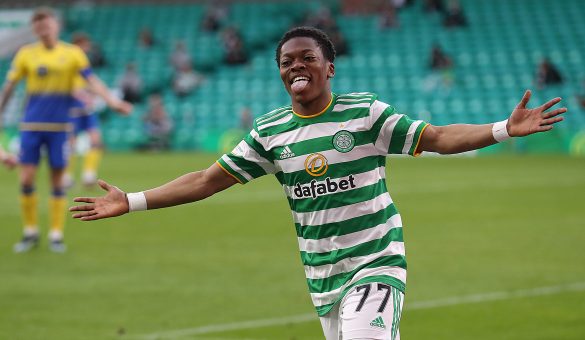 Brest announced this morning the signing of Celtic’s Karamoko Dembélé (19) – who signs a four-year deal at the Breton club after being released by the Glaswegian side, where he famously signed a contract with the first team at the tender age of 15-years old.

Karamoko said in the official club communiqué: “I’ve come to Brest because I saw that the project presented by Greg Lorenzi was good. It’s something that suits me and I think I can get playing time here. It’s a great opportunity that came my way and I was interested”.

On his own playing style the winger said: “I’m very explosive, I play on the right or as a number 10 but I like to have fun and give the fans pleasure and of course I like to score and win.”

The English right-winger has struggled to make a big impact on Celtic’s first team, after making his reserve debut four years ago. Last season the London-born one-time capped England U18 International only made 10 appearances in Scotland, scoring one goal in 132 minutes.

Born in the suburbs of London to Ivorian parents, Karamoko has played youth internationals for England and Scotland but remains eligible to play for Côte d’Ivoire, as does his brother Siriki who plays for Premier League side Bournemouth.