Olivier Giroud: “I did not know that Indians supported France.” 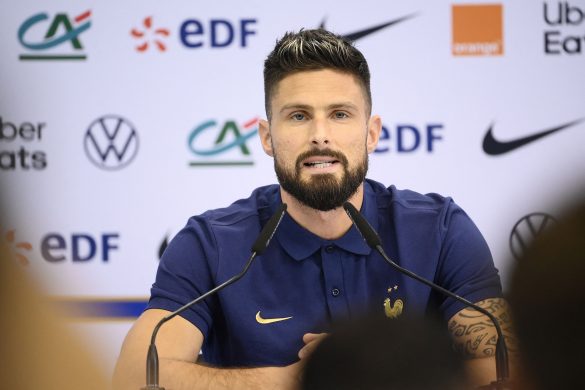 Speaking at the first press conference held by France upon arrival in Doha, Qatar, for the 2022 World Cup, French attacker Olivier Giroud was interrogated on a number of issues, including his role as a pivot and how that facilitates Kylian Mbappé, whether or not he will start vs Australia on Tuesday, how he would deal with playing second fiddle to Karim Benzema if that were to occur and much more.

On the facilities that Les Bleus will be using at Qatar:

We knew that the federation had done everything possible to put us in the best conditions. Having supporters tonight is good, we have the chance to train in a 12,000-seat stadium, it’s nice to have the support of the fans.

On whether he will start vs Australia:

We have not had a normal full training session. We arrived last night, we don’t know what team will start next week.

On his desire to score at this World Cup:

I already scored a few goals during EURO 2016, but it’s true that being able to score in the top competition is important. I’m going to be at 200% to help the team.

On his role in the team:

I’m already very happy to be here, it’s a great source of pride. Everything is clear with the coach as it pertains to my role. As soon as I’m needed, I’ll try to bring my knowhow.

On Indian fans greeting France upon arrival in Qatar:

It’s always nice to feel welcomed like that. I did not know that the Indians supported the France team, it is a serious thing given that they have a billion people.

On the key leaders in the squad:

We will miss Paul Pogba a lot, like Kanté and Kimpembe. “Paulo” has been a serious force in this France team with his personality, but I am convinced that there are other young leaders who can emerge. I too will play my role of big brother for the youngest, be available to them and speak up when necessary.

On if he is in the best form of his life:

My best form? I don’t know, in the past I also did Zlatanesque things, I like acrobatic goals. I feel good physically, in my game, in my club and in the France team. It’s a rich period for me. It’s a gift to feel like this at 36.

On preparing for this major tournament:

This is my sixth major tournament. It’s unique to have a World Cup in the middle of the season, but we are all in the same boat. It’s as if we were continuing in the wake of our domestic leagues, the players are ready, they are in good shape. You have to be vigilant with regard to physical hiccups, the staff of the France team is aware of this.

On if he will retire from international football after this competition:

I don’t set myself any limits, it could be my last competition but I don’t want to announce anything, we’ll see after the World Cup. My motivation to stay at the highest level is intact.

On the weather conditions in Qatar:

It’s stifling heat, we haven’t been out too much in the afternoon, we’ll have to get used to it. I remember that, in 2014, we played a match against Nigeria at 1 p.m. and it was 30 degrees.

On the risk of being injured in training:

You have to be careful in training and give everything on matchday. The coach tells us this too. But there is always a bit of exposure in relation to injuries, so [I] try not to think about it and train normally without worrying about it.

On his relationship with Kylian Mbappé and ability to play as a pivot:

I think I am a striker who has the qualities of a target man, with a part of my game where I can play like a pivot, make lay-offs to people. Throughout my career, players have always liked playing alongside my profile. It’s something that Kylian likes, it’s a plus.

On being back with France:

The French team is the golden egg, to go there you have to make an impact and be important in your club. This was the case with Milan, I felt very good. When I came to the national team I produced the goods, that’s what allowed me to be here. With regards to Kylian, it’s always nice to hear praise from your peers.

On how he rates France’s chances:

It’s a childhood dream, when you have the chance to participate, you want to make it to the end. I was lucky that it came true in 2018. Having the opportunity to play a third with this young talented group gives us a lot of hope. We have a lot of hope but also humility, we do not make ourselves favourites. We know that there are very big teams in this World Cup. I have a lot of confidence in this squad.

On if he is prepared to play an understudy role to Karim Benzema:

Being professional means preparing as if you are going to start the match, being ready at any time to jump in is crucial. The preparation must remain the same. You have to have the energy to bring something extra when you come into play. The more we advance in the competition, the more the bodies will be put to the test, the impact of the players who will enter the game will have to be more and more decisive.