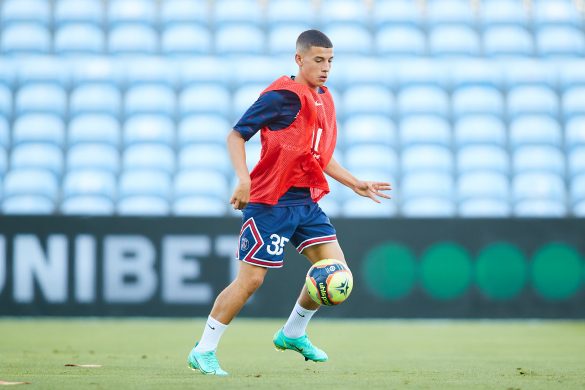 Is PSG wasting another youth prodigy? With the success of players like Kingsley Coman, Christopher Nkunku and most recently World Cup call-up – Xavi Simons since it is easy to ask the question. The next young Parisian to turn heads is 18-year-old Ismaël Gharbi. The midfielder has been lethal at the U19 level, but has only managed one appearance with the senior team.

Obviously, it can be difficult to get playing time for a team that has the list of stars and budget that PSG have, but at some point you have to wonder if PSG missed out on too many stars who were right under their noses. To PSG’s credit Ismaël Gharbi did sign a professional contract in June. However, as we have seen with other young star players, that is not always good enough. Players want to play.

Ismaël Gharbi is a sensational midfield playmaker, who can create his own chances. In his last game alone he scored two goals and an assist against JA Drancy. His technical ability on the ball makes it extremely difficult to dispossess him and his timing and range of passing is at a pro-level. He is creative and athletic. From a statistical point of view he is outplaying the U19 category and would be better served getting a chance with a senior team.

Paris is a hotbed for young football talent and Ismaël Gharbi is one of its best products. PSG have one of the best academies in France, but without an outlet for their players to showcase their talent on the senior level their development has slowed. However, this is an issue that the club has discussed as something they want to improve on.

For Ismaël Gharbi specifically, one would hope his time will come soon. The question of what the PSG project looks like without Kylian Mbappé, Neymar and Lionel Messi might be easily answered if the club took notice of the type of players available on their own training ground at PSG’s Centre de Formation.