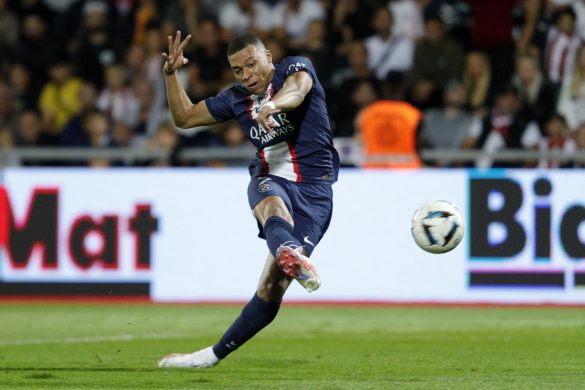 Paris Saint-Germain were made to wait before putting the game beyond Ajaccio’s reach, but ended up securing the three points to bring their lead in the league table over second-place Lorient to six points, provisionally.

The visitors initially struggled to find any attacking incisiveness, with the relegation contenders as ever proving a tough opponent when at home in Corsica. Kylian Mbappé eventually made the breakthrough as the ball was won back in midfield and Lionel Messi threaded through a ball for the Frenchman to finish in trademark, sweeping fashion.

The goal hardly opened the floodgates, though, as the forward then went on to miss an open goal after Achraf Hakimi squared the ball, having made one of his lung-bursting runs up the pitch. Ajaccio continued to hold firm, and even if all of their attempts to mount attacks came to nothing, they caused frustration for the PSG defence and saw Marco Verratti pick up his customary yellow card early on.

PSG continued to struggle to break down a resilient home side in the second half, but the resistance finally broke down in the final quarter of an hour as Messi and Mbappé once again combined for a goal each.

Achraf Hakimi  – 6 – Much more positive than in recent weeks – the Moroccan was back to his lung-bursting best as he continuously covered ground down the right, nearly grabbing an assist but for Mbappé’s open-goal miss in the first half.

Fabián Ruiz – 7 – The Spaniard clearly excelled in the three-man midfield, and has yet again impressed after his good performance in last week’s Classique. Constantly involved in PSG’s attacks.

Renato Sanches – 4 – A poor first half – rarely on the same wavelength as his midfield partners – but somewhat improved in the second, replaced on the hour mark by Vitinha.

Carlos Soler – 3 – Started in a playmaker role behind Kylian Mbappé and Lionel Messi but it was the latter who dominated creative proceedings, with Soler hardly involved. Replaced by Pablo Sarabia on 70 minutes.

Lionel Messi – 8 – Irresistibly good from PSG’s attacking leader. Every goal came from his understanding with Mbappé, and was at the heart of every attack from the away side

Kylian Mbappé – 7 – Back to goalscoring form although fairly wasteful with the chances that came his way for much of the game, including an open goal. Involved in a sensational move for Lionel Messi’s goal and got his double as the pace picked up towards the end of the game.

Benjamin Leroy – 6 – Pulled out some good saves to keep the score down, including a fantastic reflex stop from Lionel Messi’s deflected free kick early on.

Youcef Belaïli – 6 – The star of the show for Ajaccio – from feints on Hakimi to long-distance shots to test Donnarumma, the former Brest man was at his silky yet languid best.