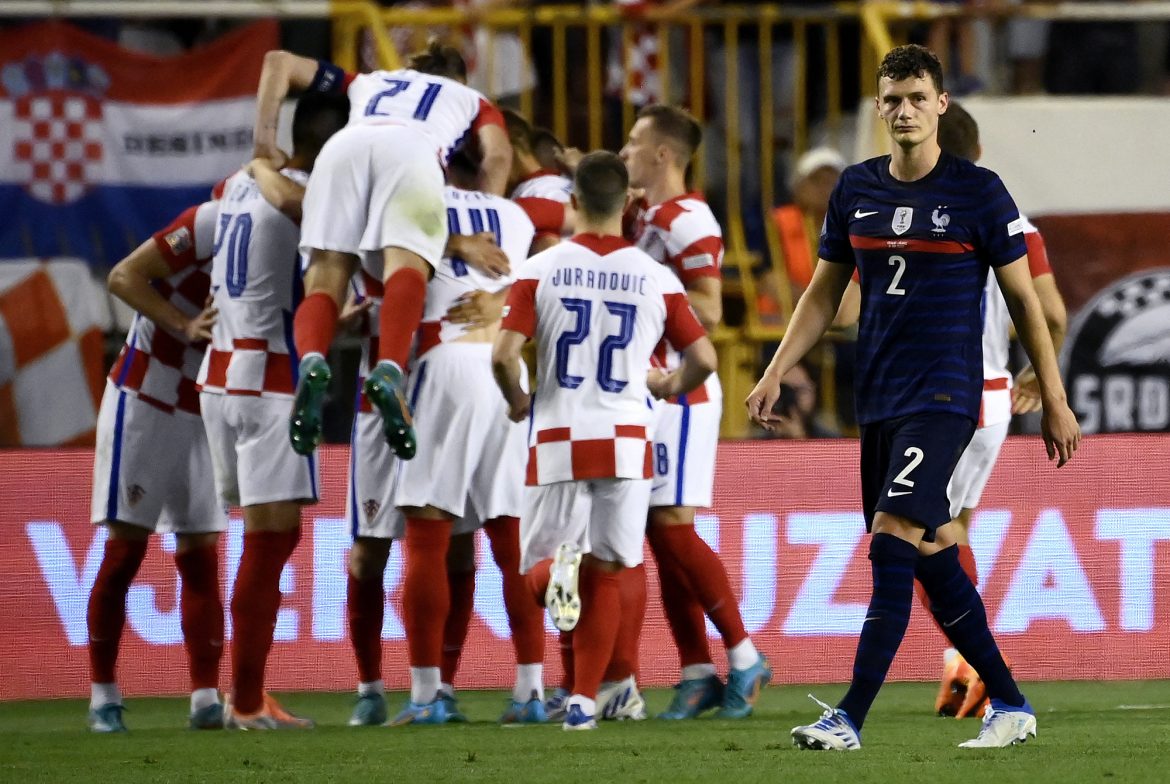 Adrien Rabiot opened the scoring early on in the second half with an assured finish from the left hand side, but their solitary point means France remain 3rd in Group 1, as Denmark beat Austria to go top.

Mike Maignan, 7 – Very quiet game, almost without a save to make until the 70th minute, when Modrić fired a dangerous effort in from outside the box, which was well parried. Also did well to come out to the feet of the Croatian striker before being tricked by Kramarić’s stuttered penalty runup. Followed up by making another important save in the final minutes.

Benjamin Pavard, 4 – A very quiet game from the French right-back, who played in a back four for the first time this year. Was still able to progress up the pitch as he could as a wing-back, but unable to contribute much to the French attack.

William Saliba, 6 – The recently confirmed Arsenal centre-back supplied a solid performance at the heart of the novel back four: a couple of important and very well-timed tackles prevented Croatia from nearing the French goal, particularly in the first half.

Presnel Kimpembe, 6 – His block early in the first half proved crucial to stopping Croatia registering a dangerous effort on goal. Continued to protect Maignan well, particularly through his aerial presence.

Lucas Digne, 4 – Pushed higher than fellow full-back Pavard in possession and was able to interact with the French attack somewhat more, but still unable to contribute anything of significance.

Moussa Diaby, 6 – The 22-year-old’s electric pace threatened the Croatian back line on a couple of occasions, despite coming to nothing. Could perhaps have done better with his chance late in the first half, which he kept on target but couldn’t put past Livakovic.

Mattéo Guendouzi, 6 – A promising performance from one the French next generation. Displayed his impressive vision on a couple of occasions, providing Moussa Diaby with some nice through balls to chase. Dropped into defense to create a back three when France had the ball.

Aurélien Tchouaméni, 4 – Had a shaky first half, in which he gave the ball away in midfield on multiple occasions, but did threaten the Croatian goal from distance late in the first half. Alternating with Guendouzi, he dropped into the back line to form a back three when Les Bleus were in possession.

Adrien Rabiot, 7 – Minimal involvement in the game from the left of midfield until his goal just after half time, which was impressively taken first time and with a striker’s composure.

Christopher Nkunku, 5 – One of the few Frenchmen to genuinely threaten in the first half and the only player to put the ball in the back of the net, with a beautifully composed chip over Livakovic, which was then ruled out for offside. Much less involved in the second half.

Wissam Ben Yedder, 6 – Almost unnoticeable in his role leading the French attack, partly the result of less French possession, until his beautifully weighted through ball to Adrien Rabiot in the 51st minute, which took out two Croatian defenders and provided the perfect opportunity to take the lead.

Mauro Icardi says he want to stay at PSG