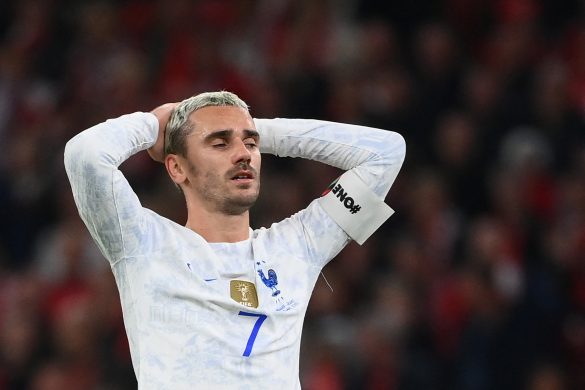 France were unable to carry over the momentum from their win over Austria by turning in a flat, uninspired performance in Denmark tonight. An admittedly heavily rotated side was unable to deal with the likes of an in-form Christian Eriksen and Andreas Skov Olsen, with an inexperienced defence ultimately costing them dearly.

A positive first twenty minutes soon gave way to a defensive shipwreck, as Les Bleus’ inexperienced back three were unable to deal with the hosts’ dynamic combinations. First former Nice man Kasper Dolberg beat Alphonse Areola at his front post after getting on the end of a Skov Olsen cross, before the assister soon doubled the lead on the volley after France were yet again unable to negotiate a set piece situation.

There was scarcely any improvement at the start of the second half as the hosts continued to press relentlessly and catch France out – Youssouf Fofana’s cameo somewhat stabilised the midfield after Eduardo Camavinga’s poor first half showing, while Adrien Truffert made his first appearance for the senior French side. Ultimately, though, Les Bleus will have Croatia to thank for beating Austria in the group’s other game tonight, as Les Bleus have avoided relegation by the skin of their teeth having won only once across the Nations League campaign. Drastic changes will need to take place before they face the Danes again in Qatar in two months’ time.

How the French fared

Alphonse Areola, 6 – Looked shaky to start with but made a string of saves towards the end of the first half, amid a period of Danish dominance, which helped his side stay in the game. His defence did him no favours but the West Ham man was France’s best player.

Benjamin Pavard, 3 – The defender once again looked at sea in the right wing-back position, none of his crosses reaching the intended target. Somewhat improved when he went into a more familiar right-sided centre-back position but still looked shaky.

William Saliba, 3 – The usually excellent Saliba looked visibly uncoordinated in the absence of Varane – hauled off at half-time for Clauss as Pavard was tucked into the right centre-back role.

Eduardo Camavinga, 3 – Looked less at ease alongside his club teammate in the midfield pivot than Fofana on Thursday, and put in a fatigued and inaccurate display. Replaced by the Monaco man at half time, which stabilised the France midfield to an extent.

Kylian Mbappé, 4 – A few sparks of life in the second half indicated that a comeback could be on, as the PSG man saw three shots in quick succession saved by Schmeichel, but on the whole a misfiring and disappointing performance, especially after the heights of the Austria game.

Olivier Giroud, 4 – Some good instances of hold-up play in the first 20 minutes but was unable to do much in the midst of Denmark’s waves of attack afterwards. Could have done better on the Skov Olsen goal from a corner, with France generally looking lost on set-pieces tonight.