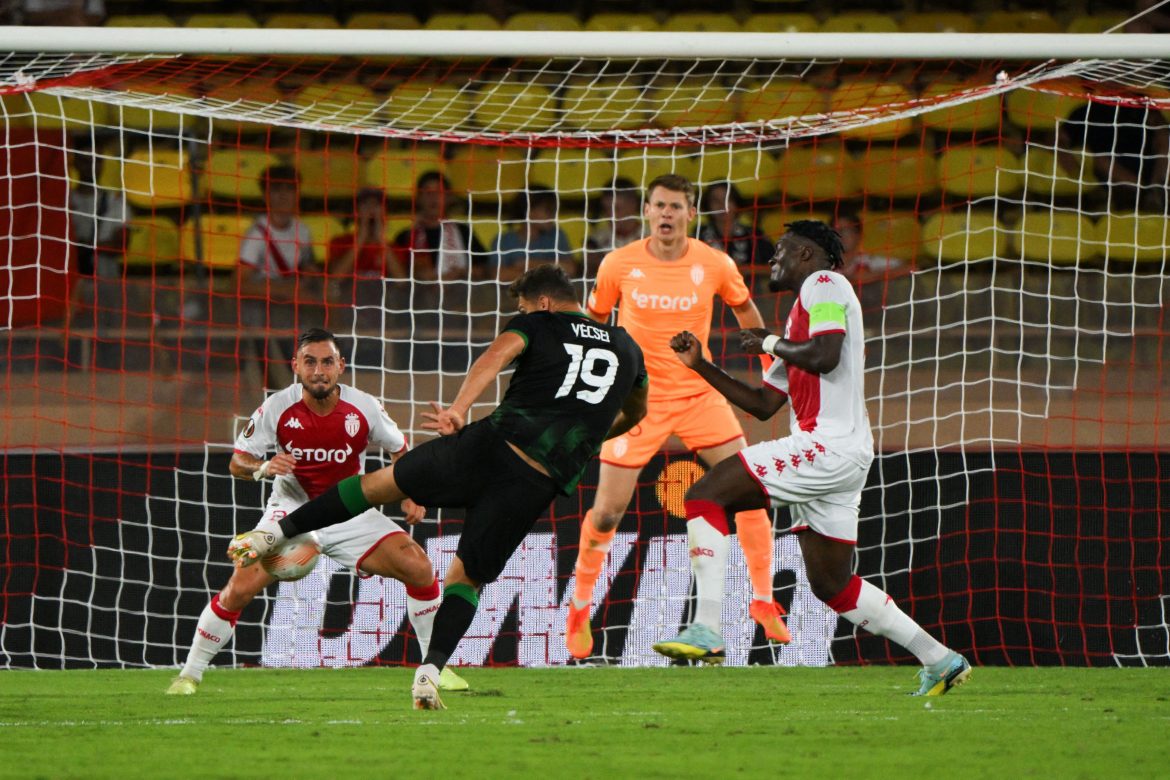 Hungarian champions Ferencváros edged a low-quality affair a the Stade Louis II. Both sides struggled to create clear-cut chances throughout the tie. Monaco’s biggest chance arguably fell to the wrong player in Ismail Jakobs, who should have scored when the ball dropped at his feet unmarked and in space just five yards out. That miss was punished minutes later when Bálint Vécsei’s deflected volley wrong-footed Alexander Nübel, who could only parry onto the post and ultimately in.

Ferencváros now have two wins in their opening two Europa League ties, whilst Monaco are on one win and one loss after beating Red Star in Belgrade last week.

Vanderson – 4 – The Brazilian has yet to repicate last season’s form this season. Although still defensively solid, he currently lacks the cutting edge in attack that made him such an unpredictable opponent of Philippe Clement’s at offensive unit. He was substituted at half-time, although in fairness to the Brazilian, any number of Monaco players could have been hooked at the break.

Wissam Ben Yedder – 3 – A day that the Frenchman will be in a hurry to forget. Just hours after missing out on Didier Deshcamps’ final squad selection before the World Cup, he had a largely anonymous appearance against Ferencváros and was subbed just after the hour mark. Beaten only by Kylian Mbappé to the golden boot in Ligue 1 last season, he has yet to register in domestic competition this campaign, and nor has he scored in Europe. A mishit shot on the rebound, that last year you would perhaps expected him to score, eptimosised his current form. It isn’t just his position in the France squad that is in doubt.

Jakobs – 3 – Fresh off the bench, the match’s most glorious opportunity presented itself to him and he couldn’t capitalise. Just five yards out, with space and time, he had to score, but he couldn’t beat the outstretched leg of Dibusz.

Dénes Dibusz – 7 – Rarely called into action but present when he was. His save from Jakobs at close-range was the crucial moment of the match. Just moments later, Ferencváros took the lead of the tie.

Aïssa Laïdouni – 7 – Technocally proficient in tight spaces, he allowed Ferencváros to manipulate space in the first-half in particular. His cross/ shot was one of very few occasions where either goalkeeper was forced into action in the first-half.

Tokmac Nguen – 7 – A livewire throughout his time on the pitch, he punctuated what was a flat game with moments of quality. A well-balanced and slight runner, his mazey runs troubled Monaco’s back three until his substitution around the hour mark. He almost made a more decisive mark on the fixture, but his composed finish past Nübel was ruled out for offside.