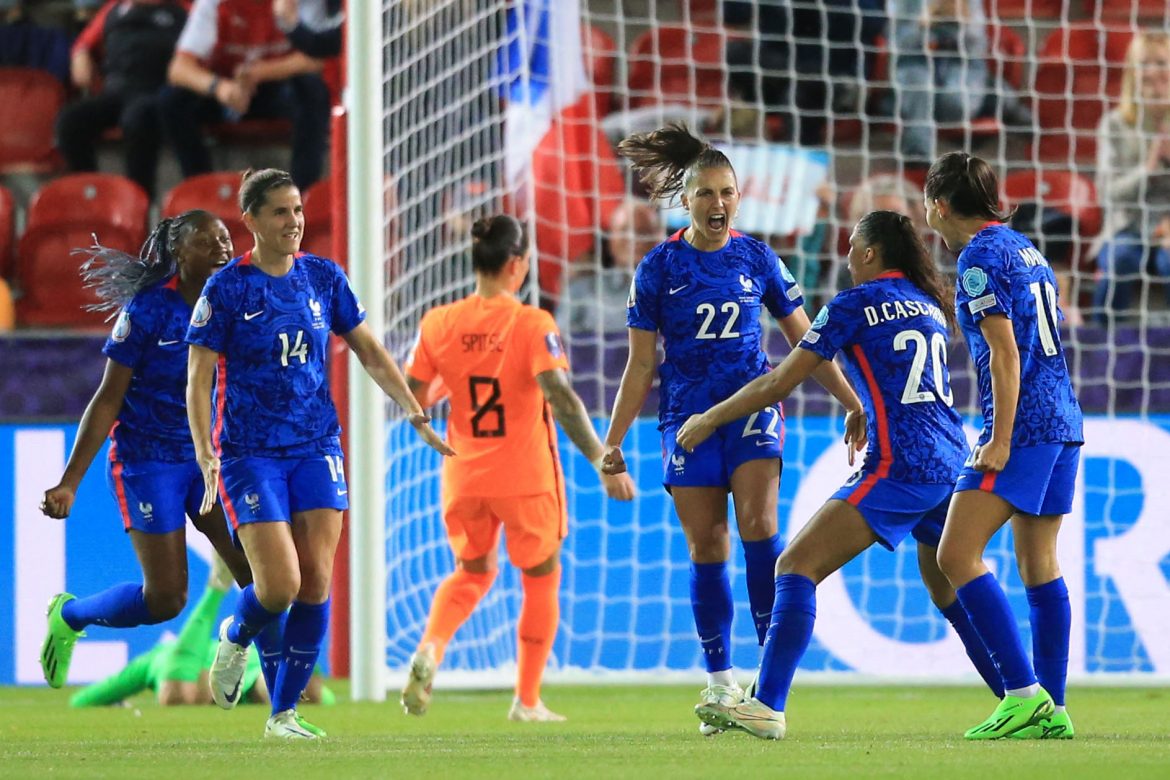 Following a swathe of opportunities, France required an extra-time penalty to squeeze past the 2017 title holders, the Netherlands. Having made a meal of overcoming their opponents, despite being the stronger side throughout the match, France have finally broken the ‘curse’ of the quarter-final, qualifying for their first Euro semi-final in their history.

Pauline Peyraud-Magnin, 5 – Very little to address, as a result of the poor Netherlands build up and her centre-backs’ important work.

Ève Périsset, 6 – Another strong performance from Chelsea’s right-back, who once again combined well with Diani up the right wing. Her touch and intricate passing helped build French attacks. Held her nerve well to convert from the penatly spot in extra time.

Wendie Renard, 5 – Typically dominant in the air with her towering presence in both boxes, but ought to have threatened with more of her headers in the Dutch box, having been targeted with almost all of France’s ten corners. Was unlucky not to have put France through with a header in the dying moments of normal time.

Griedge Mbock, 7 – Strong defensive performance from Lyon’s centre-back, who provided the last line of defence against the Dutch attack. Seemed to be omnipresent in the French defensive third.

Sakina Karchaoui, 6 – No disappointment from PSG’s roving left-back, who linked up with left winger Cascarino wonderfully on many occasions, providing overlaps throughout the game.

Sandie Toletti, 4 – Average from the midfielder returning to the starting line-up, but wildly missed a golden opportunity in the first half when the ball fell to her inside the box, which could have given France the lead.

Charlotte Bilbaut, 6 – Good passing from the veteran midfielder, who pinged the ball across the pitch accurately on a couple of occasions, one of which leading to Malard’s first-half opportunity inside the six-yard box.

Grace Geyoro, 4 – Quiet game from the first group game’s hat-trick hero. Should have put France through in the last minutes of normal time with a point-blank header before being subbed off.

Kadidiatou Diani, 6 – Typically wonderful footwork from the PSG winger, who impressed with her balance and touch, even producing a wonderfully executed roulette in the first half. Created a couple of chances from the right but nothing concrete. Seemed to lose her spark in the second half, particularly after moving inside into the number nine position.

Melvine Malard, 4 – Found herself in good positions throughout the first half but failed to convert more than one golden opportunity inside the box. Was subsequently substituted around the hour mark, having failed to fill Katoto’s shoes.

Delphine Cascarino, 7 – Yet another impressive performance from Lyon’s winger, whose positivity and confidence going forward threatened the Netherlands throughout. Having hit the target with a wicked shot from outside the box, she also found the woodwork in the first half. Very unlucky not to have scored.