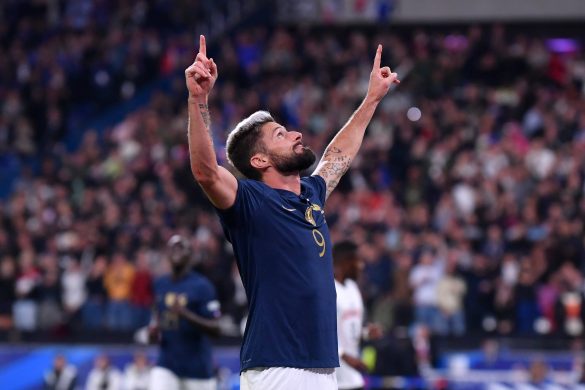 Les Bleus were desperate for a first win of their Nations League campaign tonight as they looked to stave off relegation and find a moment of solace amid a whirlwind of off-the-pitch controversies involving both the players and the FFF.

Didier Deschamps’ men started the game brightly and created a host of free-flowing attacking moves, with Kylian Mbappé notaby finding the net early on before his strike was ruled out for offside.

The team’s injury woes continued as Jules Koundé and Mike Maignan had come off by the time the second half started. Les Bleus were able to find their finishing touch though, as Olivier Giroud played it to Mbappé for the PSG man to go on a slaloming run through the defence before an emphatic finish to open the scoring.

Before long, Giroud doubled the lead with a thumping header past Patrick Pentz from a pin-point Antoine Griezmann cross. The final scoreline may well have been more convincing if not for some slighty wayward finishing, but the impressive build-up play was enough to show that Les Bleus were back to their best.

WIth the hosts seeing out the game comfortably – having been scarcely troubled by a tame Austrian side –  their first win since March lifts them off the bottom of their group and makes for a reassuring night with less than two months to go before the World Cup. The increasingly crowded treatment room, though, will remain a concern.

How the French fared

Mike Maignan, 6  – Was replaced at the break as a result of a calf issue, but in the 45 minutes he played was rarely called into action by a blunt Austrian attack. Replaced at the break by Alphonse Areola, who similarly had little to do, and keeps his clean sheet on his fourth cap for France.

Jonathan Clauss, 7 – Constantly posed an attacking threat down the right with his crosses, although many of them were wide of the mark – nevertheless growing into the all-important right wing-back role in Deschamps’ new system.

Jules Koundé, 6 – The Barcelona defender went off at the 20-minute mark and was unable to make a mark, although he performed well enough the few times he was called into question – replaced by Arsenal’s William Saliba, who put in an equally confident performance.

Benoît Badiashile, 7  – An assured performance from the Monaco man for his debut, who scarcely broke a sweat against an ineffectual Austrian attack and always looked to break the lines.

Aurélien Tchouaméni, 7 – A sensational overhead kick in the first half which was just about pushed onto the bar by Pentz, and an overall performance which has seen him well and truly claim his spot in the France midfield.

Youssouf Fofana, 7 – Another Monaco debutant who impressed, as he thrived alongside Aurélien Tchouaméni again in a dual performance reminiscent of last season.

Kylian Mbappé, 8 – Was dangerous throughout the first half but saw his finishing touch desert him – the PSG forward made things right in the second half though, scoring the opener before the hour mark.

Olivier Giroud, 8 – Was at his pivotal best and consistently set up Mbappé and Griezmann in the first half with his flicks and headers, before assisting the PSG man’s opener and then scoring from a thumping header.