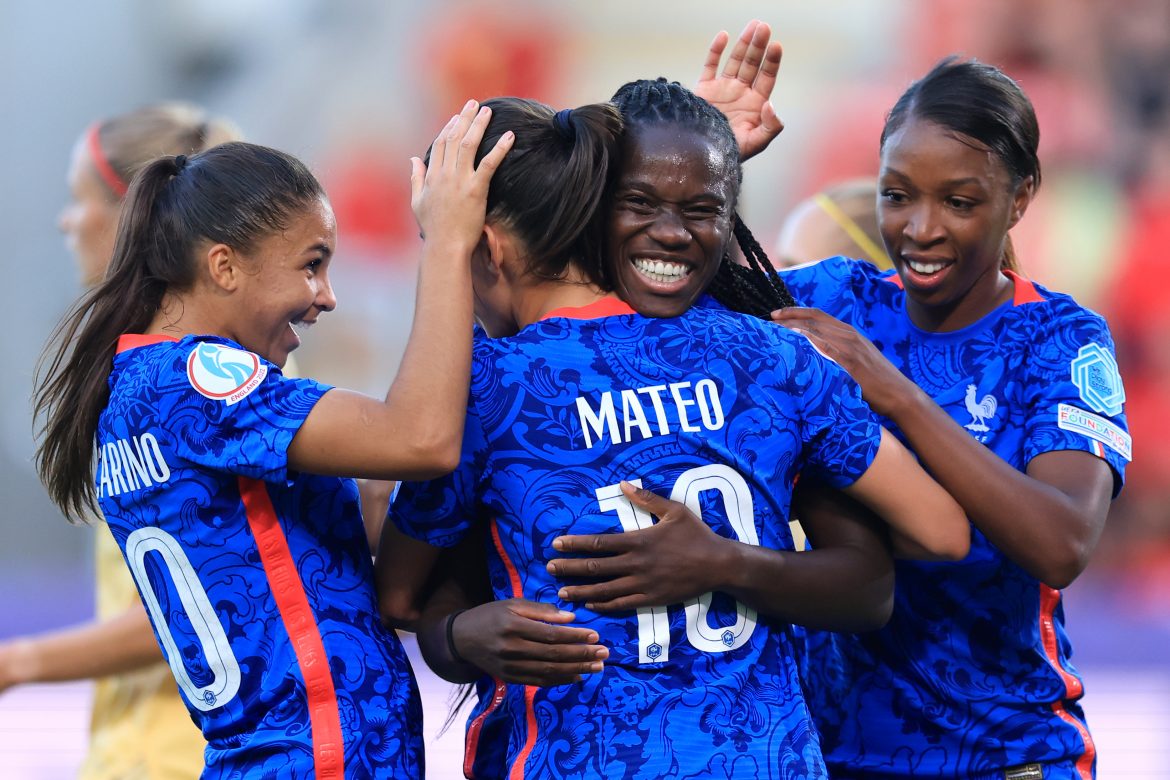 France have secured their place in the quarter-finals of Euro 2022, following a narrow victory over Belgium. A far less impressive scoreline than in their first game against Italy (5-1), partly as a result of a better organised Belgian defence, but also due a less efficient attacking French performance, despite a number of opportunities, many of which coming in the first half. Les Bleues will play Iceland in their final group game, before the second placed team of Group C in the quarter-finals.

Pauline Peyraud-Magnin, 5 – Had very little to do with very few Belgian attacks but was caught out by Belgium’s surprise counter-attack in the first half. Slightly shaky right at the end of the second half with a miscommunication with Renard.

Wendie Renard, 4 – Towered over Belgian defenders at corners, of which France had many, particularly in the first half. Unfortunate not to convert any of her half-chances in the box, but continued to impress with her forward vision, exemplified by her ball to Cascarino to start the move that culminated in France’s first goal. Performance marred by poor penalty miss in the final minute of the ninety.

Griedge Mbock, 6 – A generally quiet performance from Mbock in her first game at the tournament, but found herself in the right place to fire a header past Evrard. Perhaps could have done better in defending Belgium’s first-half counter-attack.

Sakina Karchaoui, 8 – Fundamental part of the French attack this evening, linking up wonderfully with Delphine Cascarino down the left wing. Always looking to take on the Belgian right-back and almost always successful in doing so. Her numerous dangerous crosses created good chances, including for the first French goal.

Clara Matéo, 6 – Good show from Paris FC’s midfielder, particularly successful in closing down and suffocating the Belgian midfield, regaining possession on a number of occasions. A good delivery from the right provided the perfect opportunity for Mbock to retake the lead in the first half.

Grace Geyoro, 5 – A much quieter game than her heroic performance against Italy, when she scored her first-half hat-trick.

Kadidiatou Diani, 7 – Consistently threatened the Belgian defence with her speed and skill. Took her goal well early in the first half, heading the ball in at the back post

Marie-Antoinette Katoto, 5 – An unfortunate night for France’s star player, who was forced to leave the pitch after just a quarter of an hour with a knee injury. Replaced by Ouleymata Sarr, who struggled to fill her shoes.

Delphine Cascarino, 6 – Typically dangerous performance from the Lyon winger, who brought her consistently positive approach to the game. Much like Karchaoui, always looked to beat her opposite number in order to deliver a cross or take a shot on goal.

Corinne Diacre: “We start to doubt ourselves”