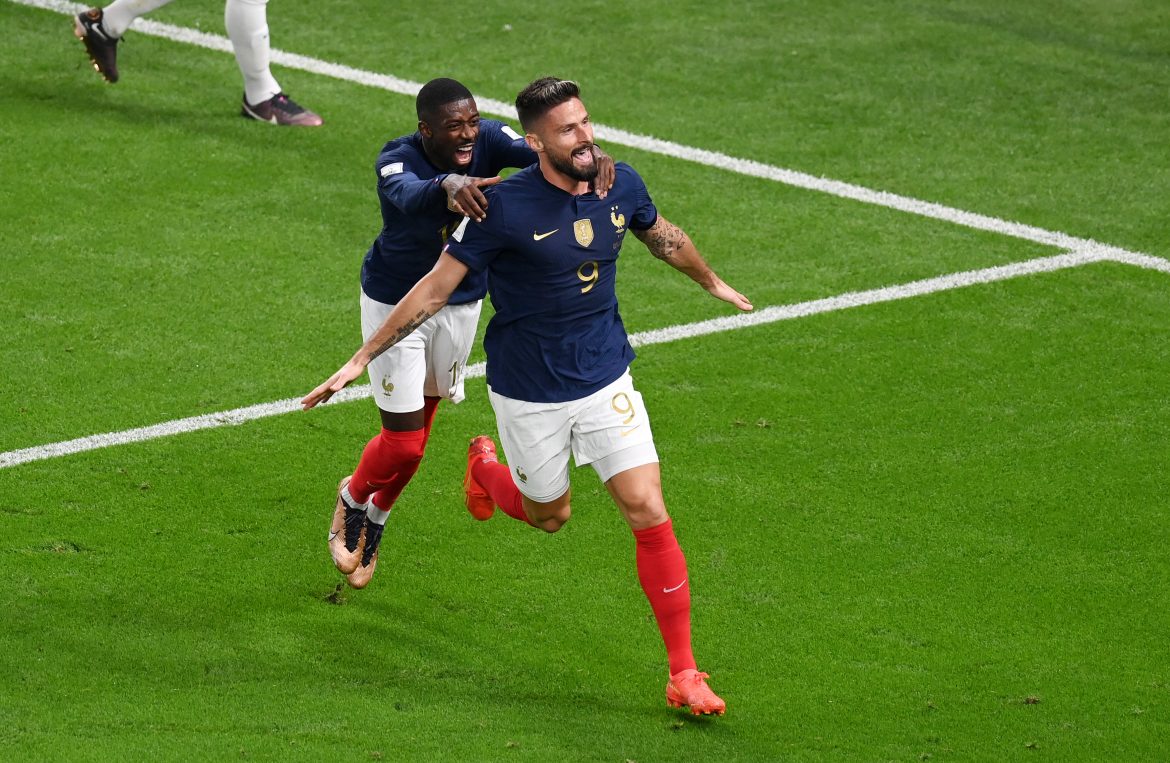 France successfully negotiated their way through a potentially tough opener on Tuesday night to make it a winning start for their World Cup title defence – after a shaky start and an early Australia goal.

The first ten minutes could not have gone worse for Didier Deschamps’ men, who were physically dominated by the Australians, and conceded the opener to a back post Craig Goodwin finish – Lucas Hernandez injuring himself in the process. The defending champions soon found their bearings though, as Adrien Rabiot headed in the equaliser before squaring it to Olivier Giroud for the Milan forward’s 50th France goal to take the lead.

After a slow start to the second half, Les Bleus eventually found a way through again, as Ousmane Dembélé – sensational throughout the match – found Kylian Mbappé to head in the third. The PSG man then found Olivier Giroud for the forward’s 51st France goal, to draw level with Thierry Henry at the top of France’s all-time scoring charts. After a build-up shrouded in uncertainty, tonight’s performance has offered some much-needed clarity and confidence for Les Bleus – whether they can follow it up against Denmark, though, is another matter entirely.

How the French fared:

Benjamin Pavard – 4 – Woeful defending for Australia’s opening goal as he lost track of Craig Goodwin at the back post, looked somewhat more stable afterwards, albeit unexpectedly far less adventurous as his opposite on the left of the defence.

Dayot Upamecano – 8 – All eyes were on France’s untested centre-back pairing, with Deschamps banking on Konaté and Upamecano’s experience playing together. It was patently the right call, with both turning in imperious performances, the latter in particular, his ability on the ball making the difference.

Lucas Hernandez – N/A – Heartbreak for the Bayern Munich man, who injures his knee ten minutes into the World Cup, in the lead-up to Australia’s opener. Replaced by his brother Théo, who virtually changed the complexion of the game on his own – got the assist for the equaliser and was constantly involved throughout the match (rating – 7).

Ousmane Dembélé – 7 – Has returned to the fray in emphatic fashion – the Barcelona winger was unstoppable on the right. Has arguably only found a starting spot thanks to Deschamps’ tactical tinkering but emerged as arguably France’s best player tonight. Got an assist for Kylian Mbappé’s goal.

Kylian Mbappé – 7 – A nervy start to the game, as he constantly found his way through the Australian defence but was missing his final touch – that all changed midway through the second half, though, as the PSG man headed in France’s third before setting up Olivier Giroud for his record-equalling goal.

Olivier Giroud – 7 – A record-equalling night for the Milan man, who has silenced the critics and shows that at 36 years old he still has what it takes to lead France at a World Cup.