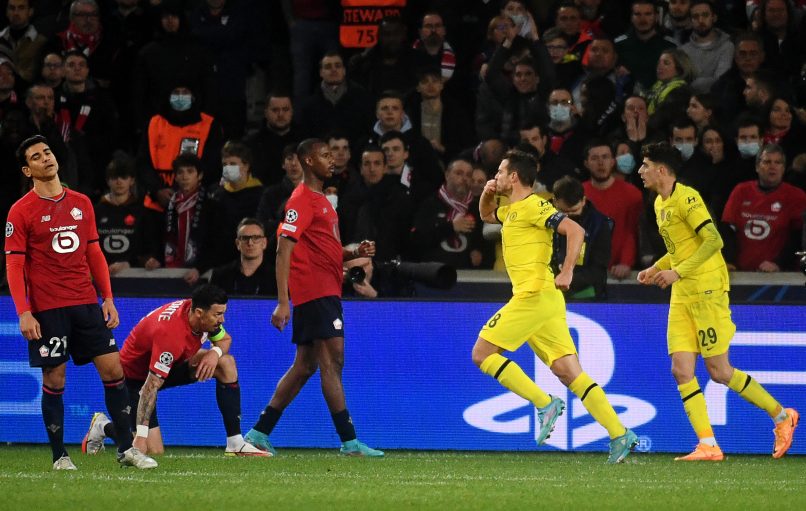 Léo Jardim, 4 – Inconsequential performance, without a single shot to stop until Pulisic’s late first half equaliser which he perhaps ought to have prevented due to the tight angle. Shaky start to the second half, very nearly gifting the ball to Chelsea with a poor pass out of his own box. Did however make a good save in added time to stop Alonso from making it 3-1 on the night.

Sven Botman, 4 – A couple of eager challenges in the first half but crucially failed to communicate with either Djaló or André in injury time, leaving Pulisic wide open for his goal.

Tiago Djaló, 4 – Good all-round display in the first half, with the exception of Chelsea’s equaliser, for which he found himself out of touch with Pulisic. Notably made an impressive driving run out of defence to win a free kick in Chelsea’s half. Had a similar problem for Azpilicueta’s goal in losing Mount on the right-hand side, allowing him to produce the dangerous cross.

Xeka, 4 – Quiet game until his free header just after the hour mark, which he guided agonisingly onto the post: a golden chance which had to be converted.

Jonathan Bamba, 5 – Limited by the Chelsea defence, but shone for a moment in the second half, beating Alonso down the right wing with some beautifully technical footwork, allowing him the space to provide a good cross to Yilmaz.

Benjamin André, 6 – Was crucial to Lille’s high press in the first half, winning a couple of tackles well, and otherwise restricting Chelsea.

Gabriel Gudmundsson, 6 – Contributed well to Lille’s fast start to the game, using his pace down the left to beat Christensen on a number of occasions but was unable to create any really dangerous opportunities.

Burak Yilmaz, 6 – His tidily finished penalty under the pressure from the home crowd compensated for his otherwise wasteful performance, in which he blazed a free kick over the bar, headed wide of the post and ended a potentially dangerous counter-attack in failing to find Jonathan David. Was however able to provide a sweet cross to Xeka in the second half, which ought to have been converted.

Jonathan David, 5 – Minimal contribution to attacking threat despite a couple of strong moments, including a neat nutmeg on Trevoh Chalobah down the left wing, and starting a potentially dangerous counter-attack in the first half.